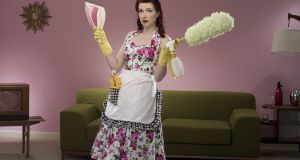 “My mother’s career was, she felt, thwarted by marriage and babies, and nappies steeping in plastic buckets.” Photograph: iStock

I watched the film The Wife recently, the one that Glenn Close didn’t win the best actress Oscar for. Bride, companion, spouse, mate, monogamist – it’s a funny little word, wife, hiding a multitude of meanings under its single weary syllable.

Anyway, the film, if you haven’t seen it, is about a seemingly intelligent woman who marries her creative-writing tutor and stays married to him despite the unrelentingly mendacious circumstances of their union. When her husband leaves teaching to become a full-time writer, Close’s character gets a job in publishing to support him.

She happens, however, to be a far more talented writer than her moody and egocentric spouse, not that her superior artistic perspicacity stops her imbibing the shtick she is treated to as a publishing assistant in New York in the 1950s, which suggests that a woman can never be as successful a writer as a man.

Forfeiting her own literary career, she instead dedicates herself to propping up her husband’s mediocre talent, sprinkling magic dust on his lumpen prose and elevating his work to such lofty heights that he ends up winning the Nobel prize in literature.

Finally, they go to Sweden to collect his award, and while she busies herself holding his coat and removing flecks of spittle from his manly beard, he gets clapped on the back and told he’s a genius – and well, things start to unravel, though there’s not a whole lot more plot to spoil.

The film confused me. I suspect we were being invited to have sympathy for Close’s character, to mourn her fate, to recognise through her the many women who have sacrificed their art on the pyre of society’s ingrained gender inequality.

Personally, though, I felt deeply uneasy with the self-abnegating premise of the film. I wanted to lead Close’s character by her pusillanimous paw to the local library and point out all the women who were writing in the 1950s, instead of choosing to hide their light under a husband-shaped bushel.

Flannery O’Connor, anyone? Simone de Beauvoir? Jean Rhys? Patricia Highsmith? Maeve Brennan? Elizabeth Bowen? One could go on – and on and on.

I have an uneasy feeling that the film’s portrayal of a privileged but passive woman finally realising that her life is a sham was intended to be seen as supporting some kind of feminist agenda. Instead, though, the context of her intractable self-effacement is never seriously examined.

I grew up in the 1960s with a mother who was a frustrated artist in a suburb far, far from Manhattan. We lived in a country squirming under the velvet slippered foot of a dominant patriarchy, in a church-state where women’s lives were hobbled financially, educationally, sexually and in terms of civil and reproductive rights.

Hell, when I was a little girl a woman couldn’t buy a shagging washing machine on hire purchase without her husband’s consent. I grew up in a society with a marriage bar,  which eloquently confined many women to the confines of the kitchen cabinet.

My mother’s career was, she felt, thwarted by marriage and babies and nappies steeping in plastic buckets, and by a husband with a creative agenda of his own, and by lots and lots of unpaid bills stacking up on the mantelpiece.

Having turned up a decade after my siblings, I later put in my years of quiet angst, feeling responsible for hijacking her chances of finally getting back to work. (And I put in other years finally recognising that, as children, we are not actually responsible for our parents’ decisions and fates – but that’s another story altogether.)

It was oddly instructive, though, to live with someone so creatively frustrated; it left me with a feeling of deep unworthiness but also a wary belligerence that finally compelled me to make something of my own.

My experience is not unusual – throw a stick in any direction in this country and you’ll knock the woolly hat off some woman who dreamt of making art and instead ended up making beds and ham sandwiches.

How difficult it must have been for that generation of women to hold on to their own identities, having vowed to love, honour and serve not their own souls or imaginations but some quivering chap or other in a shiny suit who held the keys to their futures.

But even in such conditions there were other women who broke through, women who guided the way, inspiring generations of future writers and artists.

Such women might have found the antics of Close’s educated, highly employable and talented character hard to fathom.