Isabella Rossellini: My job was ‘be beautiful and shut up’

At 65, the model has returned to the cosmetics company that sacked her when she was 43 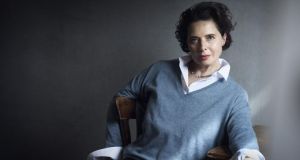 Isabella Rossellini: “They sent me so many flowers on my 40th birthday, it was a morgue. I knew I was dead.” Photograph: Peter Lindbergh/Lancome

In 1982, Isabella Rossellini became the world’s highest paid model by signing an exclusive deal with the cosmetics company Lancôme. In an era where the cult of the supermodel reigned supreme, it was big news: Rossellini was an arthouse darling, an intellectual, and the face of one of the biggest cosmetic companies in the world.

Like Liza Minnelli, she had escaped the shadow of having an enormously famous Old Hollywood mother, and was blazing a light all on her own. She wasn’t the product of Ingrid Bergman and Roberto Rossellini’s controversial marriage; she was Isabella Rossellini, goddamnit.

Fourteen years later, after she had been established as the face of the brand, Lancôme fired her. She was 43 years old. Rossellini made no secret of her feelings at the time: she was pissed.

“They fired me because I was strong,” Rossellini said in 2002. “They sent me so many flowers on my 40th birthday, it was a morgue. I knew I was dead.”

At 65, Rossellini is back working for Lancôme, and isn’t afraid to be tongue-in-cheek about it. In the 22 years that have passed since they first worked together, Lancôme has now decided that Rossellini’s age is a bonus, not a drawback.

“At the beginning of my career with Lancôme, which lasted 15 years, it was really ‘be beautiful and shut up’,” she says, her Italian accent booming and self-certain. “The models were anonymous, we didn’t know anything about them. I was married and had to remove my wedding band, just so there was nothing that you could identify. My name wasn’t used.”

She pauses to let me drink in the magnanimity of that: imagine, a model who wasn’t first recruited from Instagram based on her followers knowing every little thing about her.

“Then, two things happened. The first was woman journalists.”

She says this with a smile. Having interviewed a lot of celebrities at a lot of micro-managed press junkets, it becomes very clear very quickly who does and who does not enjoy talking to journalists. Rossellini clearly does. Which makes sense: she was one of us, after all. The relative late bloomer, who didn’t begin modelling until she was 28 and didn’t start her film career until her early 30s, spent some of her early life working as a journalist.

“Thirty years ago when I sat down [to promote a product], there was maybe one or two women journalists, and six or seven men. So it was the curiosity of the women. They said: ‘We want to talk to the model, we don’t want to listen to the CEO tell us about sales and how marvellously everything performed.’”

Her schedule today is punishing, and she’s coming down with a cold, but she’s a radiant presence in the room. She’s all flowing red robes and big earrings, conducting herself with the magisterial elegance of a minor Harry Potter character.

We’re in her suite at The Savoy Hotel – the kind of blandly chic white room that is overstuffed with flowers and understuffed with biscuits – but from the moment Rossellini sits down, there’s a professorial air to events. Her point about women journalists has extended out to be about women in high-profile roles: notably, Lancôme’s female head Françoise Lehmann.

“I’m not a sociologist,” she says, moments before saying something a sociologist might say. “But a man understands cosmetics or clothing that is addressed to him. They only understand it as a tool for seduction, and that became disproportionately important. Women like to use make-up, we like to dress up, even if we’re single, or gay. I’m single, I dress up! To always exist under a man’s eye, that is very old fashioned, and it’s dissipating. Having women in the role of CEO and decision-making jobs has enlarged the talk around cosmetics, as more than seduction.”

Rossellini’s feminist credentials are widely known, if not widely discussed. In the 1990s, she created her own make-up brand in response to her Lancôme dethroning, pointedly naming it “Manifesto”. I ask her about the many times she has been called a “muse”, and she gives me a knowing, cynical grin.

“Ah, the genius and the muse. One is the brain, one is the look,” she laughs, pointing to herself, knowing how ridiculous the whole thing is. “It just takes us out of the whole process.”

Despite her most famous work being associated with male directors – David Lynch’s Blue Velvet being the most memorable – it’s women that she keeps coming back to.

As a teenager in Italy, women would be on the street and men would comment, shouting after you. ‘I would like to do this and this to you, look at your t*ts, look at your ass’.

“Women like Julia Roberts or Lupita [Nyong’o], or Penelope [Cruz],” she says, fondly name-checking her Lancôme co-stars. “These are women that talk. They don’t have a Svengali that figures out how to make them famous. They’re in charge, they’re intelligent, they’re talented, they’re profound artists, they’re women, they’re mamas; they take life. And I like being part of that group.”

When the subject of #MeToo comes up, her position is staunch. “I’m with the women,” she says. Which, while not a surprise, it is not necessarily a given, either. Rossellini grew up in Italy, around domineering brothers and a father she periodically mistook for God.

“All of us,” she says, pointing to the women in the room, “have experienced certain degrees of abuse, whether it’s a comment or unpleasantness, or real fear. I think it’s good that we can talk about it openly.”

“Things have progressed. As a teenager in Italy, women would be on the street and men would comment, shouting after you. ‘I would like to do this and this to you, look at your t*ts, look at your ass’.

“It was every day and it was accepted. In truth, these men, I don’t think each one of them was a rapist or meant harm, but I think in the twisted mind of the culture, they thought we liked it. That deep down we were glad to provoke that reaction.

“I have an organic farm,” she suddenly says, and it’s the most perfect Isabella Rossellini sentence, because of course Isabella Rossellini has an organic farm. “I received an incredible message from a coalition of women farmers saying: ‘We’re with the actresses: we’re the same.’ It’s in every industry, just not everyone has a voice or a platform.”