He pauses. He throws his final knife. The knife hits me

From bikes flying past his head in the Globe of Death to getting knives thrown at him, Conor Pope runs away to a madcap circus 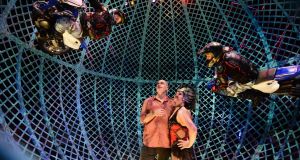 Conor Pope and Paula Mendes stand in the Globe of Death, as Maycon Douglas and Lucius Zafalon ride their bikes during the Cirque Berserk at the Bord Gais Energy Theatre. Photograph: Cyril Byrne

It was probably a mistake to place my life in the hands of a small knife-wielding Czech man with a huge top hat without asking him a single question about what might happen next or what I should do to keep myself safe.

The small man with the big hat calls himself Toni and over the course of eight short seconds on the stage of the Bord Gais Energy Theatre he terrifies me like no-one has done since Johnny Heraty gave me a late-night, high-speed and helmetless lift home on the back of his clapped-out motorbike at the height of a fierce Galway storm in the late 1980s.

But more of Toni later.

I am endlessly troubled by my tendency to agree to things without giving the consequences much thought so I hardly surprised myself by answering yes immediately when my editor sent me a mail with the single question: “Do you fancy a go on the GLOBE OF DEATH?”

This circus like you’ve never seen before is in Dublin until Sunday and is – quite literally – a high-octane show featuring leather clad men with high-powered motorbikes, Mongolian contortionists, a catapulting Cuban, hoop jumpers from Timbuktu, fire dancers from Argentina. And Toni, the knife-throwing Czech.

It is all the brain child of Martin Burton, a man who started clowning around on Brighton Beach 40 years ago. Back then Martin went by the name Zippo the Clown and fire was his thing. He used to eat it. Then he stopped. “I spent a year in a burns unit being rebuilt having failed to escape from a burning box,” he tells me casually.

After that he eased back on the flames and started travelling the world looking for acts for his Berserk Circus. “I go places and I find people,” he says as he walks me towards my fate.

I ask Martin who came up with the idea for the stunt we are about to do. “That is the question,” he says. “Who was stupid enough to come up with this idea? You can blame Lucias.” He gestures towards a leather clad biker nearby. “It was his idea. And he is the most skilled one doing it today. And the safest. Mind you, now that I think, he has broken almost every single bone in his body.” He guides me into the cage. That does not sound overly reassuring, I think.

“The next words out of your mouth will be ‘Oh sh*t,’” Martin suggests. He is not wrong.

At the centre of the stage is a large metal-meshed globe. At least it looks large from the outside. From the inside, the globe looks distressingly small and it is made smaller still because it has to accommodate me, a woman in fancy frills called Paula and two men on high-powered motorbikes.

Paula tells me I must follow every single one of her instructions and if I don’t I might die. Well, it is not called the GLOBE OF DEATH (sorry, it is simply impossible to say those words in anything other than a booming, doom-laden voice) for nothing.

I resolve to do exactly what she says.

Seconds later the two motorbikes are circling me wildly. The acrid petrol fumes sting my nostrils but that is the least of my worries. As the bikes get faster and faster they get higher and higher and appear to be travelling in a most erratic fashion. Then they are inches from my head. Upside down and barrelling around the globe at 100km an hour. The noise is deafening. I can barely hear myself scream. I nearly pass out.

But then suddenly it is over. The engines die but I don’t. I am still alive. I have taken on the GLOBE OF DEATH. And I have won.

But my ordeal is only just beginning.

A distressed looking wooden board no bigger than a small kitchen table is wheeled onto the stage. It is scarred by hundreds of holes.

A man who introduces himself asToni approaches me carrying heavy metal knives. Wordlessly he makes me stand at the board. And then, he throws a knife at me. He throws it hard.

Toni’s knife hits the board just below my knee. It’s hard not to swear at this point. Who am I kidding – it’s impossible not to swear.

Before I have time to swear more, Toni is throwing again – four or five knives in rapid succession travel up the right hand side of my body. They all hit the board with terrifyingly heavy thuds. They seem far too close to my waist, to my chest and to my neck – all parts of my body I am quite fond of.

He pauses. Then he throws his final knife.

Now, I don’t want to exaggerate here but the knife hits me.

It hits me hard on my shoulder, about an inch and a half from the jugular vein that – the biology classes of my childhood told me – is quite important to my wellbeing.

Luckily for me, the pointy end of the knife - which, make no mistake is very, very pointy - hasn’t made contact with me and what appears to have hit me was the blunt edge of Toni’s knife. There is no blood, only a pleasingly red welt.

I am in shock as wander back to Martin. I am so in shock that I barely notice that as he answers my last couple of questions he is sticking the refill of a pen up his nose. Then he asks me to take the pen refill out of his nose.

And yes, that is as disgusting as it sounds.

As he talks, a Mongolian contortionist called Okda sets up a little platform just behind him and picks up a bow and arrow with her feet. She puts her legs behind her back and, using her toes fires, the arrow at a target far, far away.

Because you might die, I think to myself as I rub my shoulder and glower in the direction of Toni.