Irish women never needed Lent – they had given up enough already

Hilary Fannin: I wondered where everyone else was, the other women, the scientists and artists, the engineers and physicists, the dancers and lovers and prophets 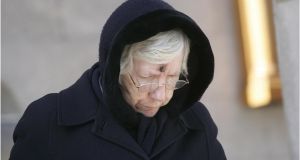 A fortnight into Lent and there are still long weeks to go before we dole out the chocolate bunnies, crack open the pink gin and retrieve the fags from behind the washing machine. So how is it going in the wilderness? Are you guys parched in the Lenten desert or calmly continuing the sacrifice?

Personally, I completely forgot that it was Lent until the woman behind the counter in my local bakery, from whom I was purchasing three large chocolate croissants, turned around to face me with a sooty forehead and a look of barely disguised sorrow at my wilful indulgence on her generously smudged countenance.

On my way home that day, I didn’t see many people wandering around these rain-lashed suburbs tattooed with black ash. Walking past the parish church, though, I did see one elderly woman with a blackened forehead underneath a knotted scarf and, behind her, two young women in Lycra, the rain peppering their gym gear, both with crosses thumbed on to their foreheads.

The older woman in the headscarf seemed timeless to me. Maybe it was the rain, or the shopping bags she held in her mittened hands, but, in a far too lyrical way for a wet Wednesday morning, she reminded me of how things used to be, of a past that recedes further and further.

She reminded me of my childhood and of how my mother, a slowly but deftly lapsing Catholic, galloped back into the house one Ash Wednesday afternoon, having left only moments before to walk up to the shops. Realising that she had forgotten what day it was, she had knelt down and daubed ash from the kitchen grate over her carefully applied Max Factor.

She wouldn’t have left the house and walked up our long, dry road of semi-detached houses, to purchase a packet of fish fingers and 20 furtive Silk Cut, without her stamp of belonging. She wouldn’t have allowed her naked face to offend Mrs McMissus, out tending her budding crocuses.

Further down the road, in the big, stern school, we children, too, learned to carry our smudged faces with pride. Jesus had had enough to contend with already, the nuns told us, what with the whipping and stumbling, and the humiliating crown of thorns, and being nailed up there on the top of the mean hill with common-or-garden criminals. There was more than enough sorrow in this wretched world, they told us, without us little girls in our T-strap sandals scourging the man with indifference.

Now, nearly half a century later, Lent appears to have a different appeal. Denial, as they say, is not just a river. Self-abnegation looks to be a new kind of aesthetic. Like veganism, or eating clean, or throwing yourself out of bed for a pint of lemony water and a brace of squats and lunges, the rewards for abstemiousness and self-discipline are tempting and temporal. Who doesn’t want to hook into a collective effort to give up chocolate or booze or fags or social media? Who wouldn’t make sacrifices to look better and sleep better and live longer, more meaningful lives?

But while it’s tempting to see Lent as becoming a secular spring-clean, it is probable that for those young women in Lycra, leaving the local church and heading over to the community centre with their yoga mats curled up under their arms, the visible marking of the first day of Lent has nothing to do with reducing waistlines or squeaky-clean colons. No, it is about faith. And I respect them for that, even if I battle to understand them.

I always felt – even though I struggled then, and struggle still, to articulate the notion – that Irish women never needed Lent. Women had given up enough already.

The woman in the scarf drew me back to memories of the meandering suburbs of my childhood, to a world of aprons and Atrixo, of aspidistras and abstention, of housewives tethered to their front doors and flowerbeds and kitchen tables and hand-cranked wringers, and to washing lines and antimacassars, and to knee-socked children in hand-knitted jumpers, and to double beds pulsing under pale-pink candlewick bedspreads. I wondered where everyone else was, the other women, the scientists and artists, the engineers and physicists, the dancers and lovers and prophets.

I remember my mother restlessly exhaling in the back garden, blowing smoke at the moon. Maybe I’m misguided to see her as a woman held captive by a creed that was often meaningless to her, where forty days and forty nights were a mere drop in a desert ocean.