Bollywood star who broke through glass ceiling with comic playfulness

Sridevi Kapoor, queen of Indian cinema, was one of the highest-paid actors of her time 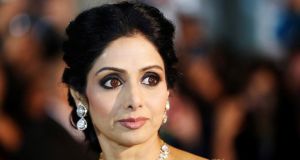 Throughout the 1980s the Bollywood film star Sridevi, who has died aged 54 after drowning in a bath at a Dubai hotel, was the undisputed queen of Indian cinema, often eclipsing the male actors she starred with.

In breaking through this glass ceiling she became one of the highest-paid actors of her time, demonstrating great versatility in roles that ranged from clown to femme fatale – no one else could have played her half-woman, half-snake character in Nagina (1986) with such seductive aplomb.

Her 300 films, made in the course of half a century of acting, began when she was a toddler, with roles in devotional films such as Kandhan Karunai (1967) and Thunaivan (1969), in both of which she played the childhood incarnation of Lord Murugan, a south Indian deity. In her most recent release, the thriller Mom (2017), she played an avenging stepmother who destroys the lives of the four men who raped her stepdaughter. Her career bore witness to the changing currents of Indian cinema, from conservative family-oriented mid-century movies to the socially engaged woman-power cinema of contemporary times, while always remaining the nation’s primary spectacle.

Born in Sivakasi, a small town in Tamil Nadu famous for its firecracker factories, she was the daughter of K Ayyappan, a lawyer, and his wife, Rajeshwari. The family ran a small plastic manufacturing unit.

Sridevi’s mother and her sister Srilata often accompanied her on film shoots. Although Bollywood remains the biggest film industry in India, the country also has rich cinema cultures in its regional languages. Adept in several south Indian languages, Sridevi was in her early career involved in the Tamil, Telugu, Kannada and Malayalam cinema industries.

But she also managed what was for her time a rare crossover from the southern film industry, thereby gaining nationwide recognition and appeal. In fact many of the early roles that set her on the path to becoming Bollywood’s first woman superstar were remakes in Hindi of regional-language hits, including the films Himmatwala and Sadma (both 1983).

Her mercurially comic facial expressions, over-the-top outfits, and dance were all of a piece with the gusto and spontaneity of her acting

Sridevi retained her striking good looks, and in her most popular roles portrayed strong, funny women: the investigative journalist in Mr India (1987) who is not above going undercover as a cabaret dancer; the street-smart dancer in ChaalBaaz (1989), whose stunt scenes are also comic ones; and the Afghan warrior in Khuda Gawah (1992) who rides a horse into battle. She was not just funny; she was also willing to look funny. Her mercurially comic facial expressions, her over-the-top outfits, and the dance moves that earned her the sobriquet Thunder Thighs were all of a piece with the gusto and spontaneity of her acting.

Sridevi was extremely discreet about her personal life. In the 1980s she was reported to have married her fellow actor Mithun Chakraborty, but the relationship did not last. In 1996 she married the producer Boney Kapoor.

Kapoor, who had produced several movies that starred Sridevi and also his actor brother Anil, was one of the kingmakers of Bollywood. Together the Kapoors and Sridevi demonstrated an outstanding grasp of the popular imagination. After her marriage to Boney, Sridevi put her acting career on hold for more than a decade, apart from a brief foray into television.

In the loud, colourful movies that she made in her heyday, Sridevi was neither studied nor much concerned with nuance. When she was on the screen it was clear that she was having a good time.

But when she returned to the cinema in 2012 as the shy housewife in English Vinglish who sets out to teach herself English for a trip to see her sister in New York, it was clear that her craft was much more sophisticated. She had reached a point in her career where she was able to balance her comic playfulness with subtlety and good judgment. In addition to numerous awards for acting, in 2013 Sridevi was awarded the highest civilian honour in India, the Padma Shri.

Women Bollywood stars, especially those with adult children who follow them into acting careers, typically make do with smaller and smaller parts while fading into oblivion. Sridevi was poised to change that trajectory. Her charisma and her family’s producing power could have combined to create a new path for her as a senior figure in Bollywood.

She is survived by Boney and two daughters, Janhvi and Khushi. – Guardian