‘I’m burdened by the life I never lived, by the wild man I never released’

Michael Harding: I had visions of hot tubs in the woods, shamanic rituals and Asian massage therapies, and chilling out with beautiful strangers 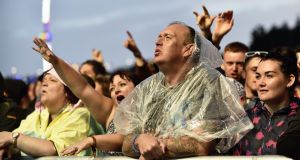 “I took the camper van to Body&Soul recently, dreaming of being young again.” Photograph: iStock

I took the camper van to Body&Soul recently, dreaming of being young again. I had visions of hot tubs in the woods, shamanic rituals and Asian massage therapies, and chilling out with beautiful strangers.

I wore my big leather jackeroo hat and a wildly florid red shirt from Indonesia, so that people wouldn’t think I was old, just because I’m 65. I even had a tent in the van, which I bought recently for €200, so I was prepared for all eventualities.

Such aspirations become more frequent the older I get; clearly I’m burdened by the life I never lived, by the wild man I never released, and now in old age, I become delusional about what is still possible.

I got too hot in my trousers under the duvet, so I flung everything off and lay naked, like a man in a hearse without a coffin

But a rainy mist hung over tent city at the festival when I arrived, and people stood around the food stalls in plastic anoraks or underneath umbrellas, creating their own delicious privacy from which I felt excluded. The only ones I talked with were men my own age, doing security at the gates, so by late afternoon I decided to go home.

Maybe that’s why I went north to Donegal the following day, determined to get some value out of the new tent, even if it was in the splendid isolation of a remote beach.

But the tent was hard to erect. Three long poles were required to stiffen the roof, like ribs. I was required to assemble the long poles by shoving 24 shorter poles into each other; and trying to get them all in their allocated holes, and then shove them through the long slit in the tent, was like trying to drive ants through the eye of a needle in single file, so I finally gave up.

I opened a bottle of wine and drank a glass to calm down but the sun fell into the ocean and a sand dune cast its shadow across my face and midges rose up in swarms and some of them dived into my glass of wine.

I was so fed up that I went to bed with my clothes on. Except that I got too hot in my trousers under the duvet, so I flung everything off and lay naked, like a man in a hearse without a coffin.

Which is when the phone rang.

Getting a call from someone out of their head on drink is never funny, but considering my stress levels as I lay wrestling with a duvet in the dark interior of a small vehicle, it brought me close to rage.

“Is it okay to talk?” the voice on the phone inquired.

“Are you drinking?” I wondered, knowing the voice instantly as an old comrade who phones once in a decade when he’s on the booze and is looking for someone to hear his confessions.

And then he corrected himself.

“Only cider,” he added. “I have vodka here as well, but I’m going to stay away from that. For now.”

It felt like listening to someone stepping under a train, or off a cliff

It’s amazing how heavy drinkers carry the shadow of an unloved child around with them.

“Don’t judge me,” he said. “There was a time when I was drinking three bottles of vodka every weekend.”

We exchanged a bit of gossip for a while, but the silences were growing thicker.

“Are you there?” he asked, after another pause.

I should have asked him was he there, but I didn’t think he would have relished existential conundrums at that point.

And because I was so frustrated at my own little life in the back of a van, I didn’t try to offer him further help or comfort.

Maybe his glass was empty and he was going for another cider, or for the vodka, or just to phone someone else. I don’t know, but it felt like listening to someone stepping under a train, or off a cliff.

And yet when I clambered out of the van to urinate, the midges were gone and the moon had risen over the ocean and it seemed unfair that I could not share this moment with him. Or that he could not share the same moon with me.

And despite the aches and pains I endured as an old man in a camper van, my anger dissolved and I slept like a log, untroubled, until I was woken at dawn by the waves, reaching towards me in their full tide.