Christmas beers to sip by the fireside 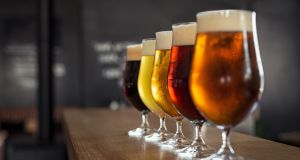 Irish craft brewers have always been keen to get in on the tradition of Christmas beers.

Christmas beer is something of a tradition among craft beer producers around the world and Irish craft brewers have always been keen to join in. Most of the beers I tried had levels of alcohol approaching those of wine; perfect for banishing the winter cold, but definitely not session beers. Eoin from Blackrock Cellar (one of the best beer shops in the country) pointed me in the direction of a few seasonal specialities; I also received a few samples from elsewhere.

I have written about Mayo brewery Mescan before but the intriguing full-bodied Beoir na Nollag, 8.8 per cent, (€4.40) would make a perfect stocking filler for the beer lover in your life. It spent a little time in whiskey casks.

In a similar vein Rye River Garnet Imperial Brown (€14.99 for a 75cl bottle) was aged in cognac barrels; it is rich and sumptuous and comes in at a warming 9.5 per cent. DOT Brew, mentioned a few weeks back, supply both Redmonds and Blackrock Cellar with their own-label Christmas beer. Joël’s Barrel-aged Vietnamese Coffee Stout (10.8 per cent, €5.65, Blackrock Cellar) is a powerful, rich, smooth and complex beer; one to sip by the fireside as you contemplate life.

On a different tack, The White Hag Yule Christmas Ale (7.2 per cent, €2.95/four for €10) is a malty red ale flavoured with honey, cinnamon and ginger; it works very well too. If that doesn’t appeal Dungarvan have a lighter (4.7 per cent) winter beer, the Coffee and Oatmeal Stout (€3.75), which has a lovely toasty edge.

Four wines that capture the last drop of summer
7