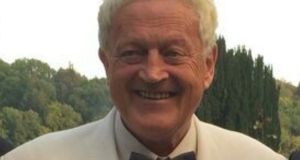 Dermot Walsh: well-known throughout Ireland as a pioneering figure, not alone in the tourism industry, but in many other spheres of life as well.

Businessman Dermot Walsh died on January, 16th, 2020, at the age of 76, following a long illness. His passing occurred on the day of the 50th anniversary of his marriage to his beloved wife, Susan. A household name in his native Donegal, he was also well-known throughout Ireland as a pioneering figure, not alone in the tourism industry, but in many other spheres of life as well.

He was born at home, in the townland of Rinnaraw near the small village of Portnablagh, on Donegal’s northwest coast, in a room overlooking the beautifully scenic Horn Head and, from an early age, was destined to become immersed in the tourism industry. His grandfather, Donal Teague McGinley, who was principal of Murroe national school, built the first family hotel in Portnablagh in 1922, a bold a step at the time. It had only been open for about six months when Teague died suddenly. His daughter, Nina (Dermot’s mother ), was in the middle of her hotel training course in Dublin at the time and had to return home without completing it to take over the running of the hotel. Within a year she married Dermot Walsh snr (Dermot’s father) and, together, they ran the Portnablagh Hotel very successfully for many years. The Carrigart Hotel came on the market in 1946. They succeeded in purchasing it and the business of both hotels thrived under their control.

Having completed his secondary education in Castleknock College, Dermot jnr took a degree in economics and politics in UCD in 1964 and would later complete a postgraduate MBA degree in Trinity College in 1968. He represented UCD in both rugby and athletics and was hugely proud of the fact that he was a member of the UCD first rugby team at a time when it had seven international players in its squad.

Upon his return to Donegal, he took over the running of the Carrigart Hotel and developed its facilities. He would later run the Portnablagh Hotel also, driving both of them to national prominence. In 1992 he started the development of a 36-hole links golf course on his land overlooking Sheephaven Bay, later to become St Patrick’s.

Dermot was a champion of the community self-help and development. In the 1960s, he was closely associated with Fr James McDyer in promoting the Glencolumbkille Co-Operative project, together with the Folk Village Museum and other community projects. In the 1970s, he played a key part in helping to found a co-operative venture which would later lead to the establishment of one of the first fish farming projects in Mulroy Bay.

In the 1980s he founded the Colmcille Heritage Centre at Gartan, Church Hill, Letterkenny. In 1990, he was one of the co-founders of Highland Radio, which has the highest market share of any local radio station in the Republic.

In 1979 he spearheaded the Archaeological Survey of Donegal and helped oversee its publication in March 1983. This survey of the field antiquities of Donegal from the Mesolithic period to the 17th century remains a powerful repository of the archaeological history of the county.

He served in a voluntary capacity on numerous bodies, including the Trans-Ulster Cross Border Tourist Association, of which he was president; the National Tourism Council of Ireland; and was a director of the Donegal Leitrim Sligo Regional Tourism Organisation, including four years as its chairperson, from 1983 to 1986; The Irish Hotels Federation; An Taisce; the Donegal Historical Society, and many other local organisations.

He stood for election to Seanad Éireann in the NUI constituency, in 1981 and 1982, and was only narrowly defeated.

He was widely regarded for his many charitable deeds and sponsorship of numerous community organisations and individuals involved in the promotion of the arts, but always tried to keep such acts private.

Each year the swimming pool in the Carrigart Hotel was made available free for water safety courses. He was made a life governor of the Irish Water Safety Association in 2006.

Throughout his life, he showed outstanding support and care for the most vulnerable in society. Entirely on his own initiative, the Carrigart Hotel was made available free of charge for five days each year for the use of patients of St Joseph’s Community Hospital in Stranorlar and the former St Conal’s hospital in Letterkenny. This continued for 38 years.

He was selected as the 1980 Donegal Person of the Year by the Donegal Association in Dublin.

He had an intense love of his native county and was proud of being honoured in this way. This was summed up at the conclusion of his acceptance speech: “I am so proud to be a Donegal man. It has provided me with a sense of place and of roots and commitment. I believe all Donegal men and women, no matter where they live, share this feeling. It is what makes us citizens of the world.”

He is survived by his wife, Susan (née O’ Sullivan), their children, Cormac, Aisling, Afric, Oisin, Diarmuid and Niamh; eight grandchildren; his sisters Terry, Maeve and Angela; and his brother, Paddy.