Caroline Crowley obituary: A great listener who ‘even saved lives’

Lives Lost to Covid-19: Devoted wife, mother and grandmother who ‘would give hours to anyone who would ask for her advice’ 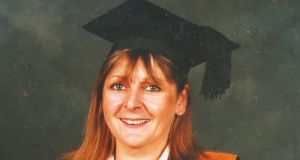 In February 1980, Caroline Daly walked into a record shop on Camden Street, looking for Jane Birkin and Serge Gainsbourg’s Je T’aime on vinyl. The record was out of stock, but shop assistant Gerry Crowley took her details to place an order.

When the record arrived, he went to the hospital where she worked to deliver it to Caroline personally, with a written note asking her to meet him at Cassidy’s pub at 8pm that evening. Within a month, the couple were engaged, and they married that October.

Caroline, who died from coronavirus at the age of 60, was a devoted wife, mother, grandmother and friend who “would give hours to anyone who would ask for her advice”, Gerry says.

The eldest of six children, she was born in 1959 in Mullingar, Co Westmeath, to Peg and Jack Daly, the latter a detective with An Garda Síochána. She was sister to John, Pauline, Mark, Raymond and Anita.

On finishing her Leaving Certificate at the age of 17, she travelled to London, where she got her first job nursing at the Middlesex Hospital. In 1979 she moved back to Mullingar and got a job at the Eye and Ear Hospital in Dublin, where she was working when she met Gerry.

Their first daughter Loren was born the year after they married, followed by Barbara, Andrew and Daniel. In 1987 the family moved to London, where Caroline worked as a dental nurse, and Gerry with a record company. When they returned to Ireland in 1992, Caroline got a job at Midlands Radio, before becoming a supervisor for the Irish Wheelchair Association.

Her career changed direction again in 2000, when the family moved to Cork to care for Gerry’s ageing mother, and Caroline became a site manager with Noonan’s Contract Cleaners at the Mercy Hospital in Cork, followed by Cork Airport. Gerry’s mother died in 2009, and the couple left Cork to return to Mullingar to be closer to Caroline’s parents.

Caroline had suffered muscle problems since a car accident in 2006. “That was really hard for her,” Gerry says, “as she was a very outgoing person and loved work. But she kept going. She loved walking, she loved music and dancing and parties and fun.”

She adored her grandchildren Lee, Chloe, Marc, Tommy and Glenda, and her dogs Lexi and Buddy.

“She had a great knowledge of many subjects including politics, economics and medicine . . . I could never win an argument with Caroline, she knew everything,” Gerry says.

She also had a Master’s in counselling from NUI Maynooth, which she never used professionally, but “she became a counsellor in our house”, Gerry says.

“She was the one person people would go to for advice, she was a great listener. Friends, family, and her kids would all call her for advice on relationships. On a few occasions she even saved lives - there was a situation in London where her friend was being abused by her partner. She went to their home and confronted him.”

Caroline developed an illness last year and spent time in Mullingar Hospital. She recovered well in the care of her family, but after Christmas this year, she began to get sick again. Recuperating at her parents’ house after two weeks in hospital in March, she began complaining of a shortness of breath, and was diagnosed with pneumonia and admitted to hospital. A test for Covid-19 returned negative, but her condition worsened and she was retested again. Caroline died on the night of March 30th, before the test results returned showing she had contracted the virus.