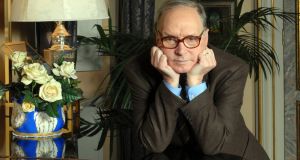 If ever a name was synonymous with movie soundtracks, it was Ennio Morricone. Although it took the Hollywood film industry until 2007 to reward Morricone, who has died aged 91, with an honorary Academy Award, after he had been nominated on five separate occasions without winning an Oscar, his scores for The Good, the Bad and the Ugly (1966), Once Upon a Time in the West (1968) and The Mission (1986) are among the best-known and most accomplished ever written. In 2016 he won the Oscar for best original score for his work on Quentin Tarantino’s The Hateful Eight.

But Morricone always kept his distance from Hollywood and made a point of remaining in his native Italy, even politely refusing to learn English. “You can see my decision as either a distinctive factor or as a limitation,” he commented. “I don’t feel it is a limitation.” Part of the reason was that, while the world knew him as the man who made spaghetti westerns with Sergio Leone and Clint Eastwood, Morricone always viewed himself as a composer for whom film work was only a part of his career.

At his regular live performances, he would invariably programme some of his concert pieces alongside selections from his film music (he wrote more than 500 scores during his lifetime). “As I am very old, people should know all the kinds of music that I write,” he observed when in his 70s. “Some people believe that I just write film scores, which is not true.”

Morricone did not make his debut in film music until he composed the score for Luciano Salce’s Il Federale in 1961. By then he had gained a solid grounding in serious classical composition. He was born in Rome, one of five children of Mario Morricone, a musician, and Libera (nee Rifoldi), and enrolled at the city’s Conservatory of Santa Cecilia at the precocious age of 12. He emerged steeped in compositional skills and with a thorough knowledge of the classical tradition, but found it difficult to earn enough money writing original pieces.

He married Maria Travia in 1956, and their first child, Marco, was born the following year, so there were mouths to feed. Morricone found work as a composer and arranger for Italy’s national radio network, wrote music for theatre and television, and sometimes worked as a jazz trumpeter, occasionally adopting pseudonyms such as Leo Nichols or Dan Savio. As a session musician he often found himself playing on recordings of film scores. He was not impressed by what he heard.

“Most of these scores were very ugly, and I believed I could do better,” he said. “The neorealism in Italian cinema was really wonderful, but these new realistic movies didn’t have great music at all. I needed money and I thought it would be a good thing to write film scores.”

He had first met Leone when they were both aged eight and attended the same primary school, but it was not until 25 years later that their professional partnership began with A Fistful of Dollars (1964). Morricone’s contribution to its mood and scope was immense, as was his role in building the myth of Eastwood. “I attempted to reinvent American folk,” Morricone explained. “The caricatured nature of Leone’s characters inspired me to introduce strange sounds into the score, so they would have the charisma he wanted.”

It was, perhaps, his familiarity with surrealistic avant-garde compositions that would help him devise such striking devices as the coyote-howl motif from The Good, the Bad and the Ugly or the deafening ticking pocket-watches measuring out the climactic shoot-out in For a Few Dollars More (1965). Morricone’s score for Leone’s Once Upon a Time in the West was virtually a self-contained opera bursting with epic themes and individual character motifs.

Morricone had no intention of being typecast as a composer of music for westerns. His soundtrack for The Battle of Algiers (1966) vividly amplified the director Gillo Pontecorvo’s story of revolutionary struggle against French colonial rule and the paratroopers brought in to enforce it (thanks to its quasi-documentary approach, the film came to be regarded as virtually a textbook for resistance movements), while Bernardo Bertolucci availed himself of Morricone’s skills for 1900 (1976).

It was to Morricone that the writer/director Giuseppe Tornatore turned when he needed a score for Cinema Paradiso (1988), a haunting paean to the power of cinema, seen through the eyes of a Sicilian child, which earned a reputation for helping to kick-start a revival of Italian cinema.

Ironically, its initial reception in Italy was lukewarm, but a shortened international version was hailed as a classic and carried off the Academy Award for best foreign language film in 1989. However, Morricone’s soundtrack, on which he was assisted by his son Andrea, was not nominated.

Although he would have a long wait for Oscar recognition, Morricone’s reputation was becoming platinum-plated within the global film industry, and major Hollywood directors had begun to call for his services. Morricone worked his magic on Terrence Malick’s much-admired Days of Heaven (1978), and then found himself in the lurid milieu of organised crime and law enforcement when he signed on for Barry Levinson’s mobster saga Bugsy (1991) and Brian de Palma’s Prohibition-era epic The Untouchables (1987). Each of these three projects earned Morricone an Academy Award nomination.

In 1986 Morricone was not the only one who thought he should have won the Oscar for his work on The Mission, Roland Joffe’s historical account of Jesuit missionaries in South America which prompted one of Morricone’s most lyrical and popularly recognised themes, but he was beaten to the punch by Herbie Hancock’s jazz score for Round Midnight. There was presumably some consolation in the fact that The Mission did win him awards from the American Film Institute and the Golden Globes.

Morricone was so prolific that it became difficult to keep count of the projects he was involved with, but among his other Hollywood credits were Roman Polanski’s Frantic (1988), Franco Zeffirelli’s Hamlet (1990), starring Mel Gibson, the Eastwood/John Malkovich thriller In the Line of Fire (1993) and Ripley’s Game (2002).

Perhaps inevitably, Morricone was a favourite of Tarantino, an aficionado of spaghetti westerns and European cinema. Tarantino included extracts from Morricone’s work in Kill Bill Vol 1 (2003) and 2 (2004), in his 2007 slasher-trashploitation flick Death Proof, and in Inglourious Basterds (2009). Tarantino’s Django Unchained (2012) contained Morricone’s newly composed song Ancora Qui alongside three of his existing compositions.

In 2013 Morricone presented Tarantino with a lifetime achievement award from the Rome film festival. Although he declared he would not work with Tarantino again after being unhappy with the way his music was used in Django Unchained, he composed, orchestratred and conducted the score for The Hateful Eight.

He performed regularly throughout Europe, and in January 2016 he commenced a tour, 60 Years of Music, which visited more than 40 European cities. He played his final concert at the Palazzo Madama in Rome in January.

He is survived by his wife, Maria, and their three sons, Marco, Andrea and Giovanni, and daughter, Alessandra.