Ross O’Carroll Kelly: Isn’t everyone wearing a kimono to watch the rugby?

‘According to Fionn, it makes me guilty of a thing called “cultural appropriation’’’ 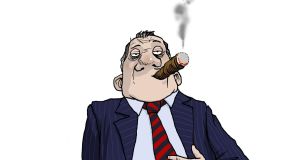 ‘No,’ the old man goes, ‘what you watched was a carefully edited and cleverly cut version of the match’

So I invite the goys around to watch the opening match of the World Cup and – typical me – I end up pushing the boat out in a major way. We’re talking the full nine yords here?

I decide to give the morning an actual Japanese theme, so I buy 80 bottles of Sapporo, then I obviously tip the contents down the sink and fill them up with Heineken. I’ve also got 15 or 16 boxes of sushi from Morks and Spencer. And then – a nice touch, this – I answer the door to the goys wearing Sorcha’s pink kimono with the pandas and pagodas on it and I put my hands together as if in prayer while bowing to greet them. Which, according to Fionn, makes me guilty of a thing called “cultural appropriation”.

He also has a problem with me pronouncing all my “R”s as “L”s and all my “L”s as “R”s, which he says is “er, kind of offensive?” so I drop it after a quick round of “Herro”s.

We get comfortable in front of the TV and stort watching the opening ceremony. JP goes, “Er, Ross, you know your kimono is open?”

I’m there, “Yeah, no, it’s actually Sorcha’s? She bought it in the spa in Monort – it’s, like, so silky that the belt refuses to stay tied.”

Unbelievable. All the effort I’ve put in to make it seem like we’re in actual Japan and this is the thanks I end up getting

“-put some underpants on?”

“Hey, it’s cool. I kind of like the airy feeling?”

He goes, “Dude, seriously, either you put on a pair of boxer shorts or I’m going somewhere else to watch the match.”

Unbelievable. All the effort I’ve put in to make it seem like we’re in actual Japan and this is the thanks I end up getting. I stand up – everyone averts their eyes – and I head upstairs to throw on some kacks.

As it happens, I don’t make it that far, because there ends up being a ring on the door. I answer it and it’s, like, the old man.

I’m like, “What the fock are you doing here? I’m about to watch the match.”

He goes, “Is it an important one?”

I feel like I’m talking to my wife here.

He’s there, “Yes, of course! Sorry, Kicker, I’ve been rather preoccupied with this,” and he holds up his laptop.

I’m like, “What is it?” but he doesn’t answer me. He just steps past me into gaff. I follow him down the hallway and into the living room.

He goes, “Oh, look, all your chaps are here! Well, that’s a stroke of luck because I want to get your opinion on something!”

And that’s when – I swear to God – he literally switches off the TV and opens up his laptop.

He goes, “This is very important, Ross.”

And I’m there, “So is Japan versus, I don’t know, whoever they’re playing today.”

He’s like, “I want you all to look at something. This is the only video footage that exists of the Munster versus All Blacks match from 1978.”

“Not this again!” I go. “Yeah, no, he’s become a Munster Truther, goys. He’s trying to prove that the supposedly miracle match never actually happened?”

Oisinn goes, “Oh, it definitely happened. I know someone who claims to have been at it.”

“Okay,” JP goes, a big smirk on his face, “let’s see this evidence,” and the goys all gather around his laptop. They’re worse for encouraging him.

The old man storts playing the footage. It’s, like, after the match. There’s, like, hundreds of supporters on the pitch, surrounding the Munster players, who all have their orms in the air – in, like, triumph?

“So this is the aftermath of the match,” the old man goes. “The Munster players celebrating. Now, I want you to look at the great Tony Ward. There he is there. You’ll recognise him, Ross – you being a fan and everything. Now, look at his face – he has a five o’clock shadow, you see? And here, in this window, is a photograph of the chap converting Christy Cantillon’s try – where he’s clean-shaven.”

Fionn’s there, “I have to be honest, Charles, I don’t see what you’re seeing.”

“Also,” the old man goes, “look at the great Ginger McLoughlin celebrating at the final whistle! You see? Look how dry he is! And yet we can all see from the footage that it was raining for most of the match! Look, here’s a photograph of him in the second half! See? The chap was bloody well covered in mud!”

I’m there, “So what does all of this prove?”

He goes, “The celebrations were staged, Ross.”

“Quote-unquote. Possibly the following day. But certainly some time afterwards. They got the players and a crowd of fans together and they faked a scene of celebration to convince the world that they actually won the match.”

JP goes, “This is great work, Charles,” and for some reason it annoys me to see the dude ripping the pistachio out of my old man like this.

Fionn’s there, “But Munster did win the match, Charles. I’ve actually watched it.”

“No,” the old man goes, “what you watched was a carefully edited and cleverly cut version of the match. Watch this. If I pull the footage back a bit. Okay, it’s the 78th minute. There’s the legendary Pa Whelan with the ball, yes? Now, watch what happens next! There!”

He goes, “It wasn’t turned over, Kicker. The footage jumped. And it jumped because the film has been cut. There are two missing minutes from the game, during which we – and, by we, I mean the Society of Munster Truthers – believe that the All Blacks scored and converted two tries to level the match.”

But he goes, “I haven’t lost it at all, Ross! My eyes are suddenly open! And so is your kimono, by the way!”

Fish and chips: How to cook them just like the chipper

‘It was absolute chaos, but we were able to find a sense of peace’
6

Living with illness: ‘I was told to go and spend time with my family’
9

‘Dad began to slip away... but my sister could only join by Facetime’
Real news has value SUBSCRIBE