'Don’t look so scared,' my friend said, as I stepped across the threshold 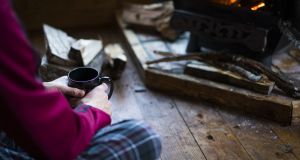 ‘My friend tried to get the fire going by placing a sheet of newspaper against the mouth of the chimney, to create a draught.’

I went to Clare last week in the camper van, and dropped into an old friend who lives in a schoolhouse near the Shannon river; a building he lived in for many years with his beloved wife until she passed away.

Although for me the school house still hummed with echoes of a darker Ireland. Two class rooms joined by a partition and high windows, were all identical to the horror house where I once sat in short trousers, terrified that a teacher would clatter me in the face with his fist or bounce the wooden duster off my nose because I couldn’t pronounce my Irish verbs with the exact guttural finesse of a native Kerry speaker.

For me the old school house was like a museum of war, in which I had long ago been tortured.

“Don’t look so scared,” my friend said, as I stepped across the threshold and through the porch which would have been a cloakroom in the bad old days.

There was a stove at one end of the large double room, and an open fire at the other end.

In those days fire lighters were a luxury, used only at Christmas

My friend tried to get the fire going by placing a sheet of newspaper against the mouth of the chimney, to create a draught.

“I haven’t seen that done for a long time,” I declared. “Not since my mother would drag a bucket of coal into the dining room and toss me a box of matches and the Anglo Celt and command me to light it.”

In those days fire lighters were a luxury, used only at Christmas. Normally she would wind sheets of newspaper into long narrow tubes, and then fold the tubes over and knot them together, until she had something that worked as effectively as a fire lighter.

The coals were placed on top of the tight newspaper tubing and then I was commissioned to light it. But it required a fierce draught to sustain the flame and ignite the coal, and so I would hold another sheet of newspaper against the mouth of the chimney until the flames within roared upwards.

Sometimes I’d get interested in what was in the paper. A drunken brawl or a football match vividly described by a circuit court reporter, and as I was holding the paper I’d forget the noise of the flames roaring up the chimney, until the paper caught fire, and I’d need to crumple it very fast, and drop it into the fire grate to avoid the house going up in smoke.

But the ball of fire usually went up the chimney anyway, because of the up-draught; and my mother would come screaming from the kitchen, saying that I was trying to burn the house down.

My relationship with mother was tricky at the best of times, but I wasn’t so bad that I would try to burn the house down with her in the kitchen. The accusation often caused me to burn with rage, though I remained silent.

In those days I bottled my rage and held it in for years until some therapist could take it out of my guts like ashes from a wet bag and poke through it for clues to my melancholy.

My friend got his fire going with the Clare Champion, and then we sat listening to the rain outside, and the little flames crackling in the fire grate. He spoke of his beloved, and the joy they shared in their schoolhouse home, until her death a few years ago.

Then a neighbour arrived.

“I am from West Africa,” he said to me as we shook hands, “but I’ve been living down the road for a few years now.”

My host offered him tea and cake but he said he was fasting. And like a gobdaw I presumed he was a Muslim.

“Oh,” says I, “I thought Ramadan was over for this year.”

I suppose I was trying to show my sophistication. Instead I only showed my ignorance. He laughed heartily and said his doctor was checking his bloods for sugar the following morning.

Later another neighbour arrived with a pot of home made jam; an English man who insisted on calling it a pot of jelly.

And then more neighbours came, until the school house was full and rang with laughter, songs and stories, as we remembered the beautiful woman who had passed away. Her ghost was everywhere, and in the ritual of remembrance, I was loosened a bit from my own wounds, and began to see how beautiful the old school house really was.