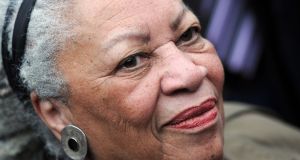 Toni Morrison: she was the first African American woman to win the Nobel Prize in Literature. Photograph: Franck Fife/AFP/Getty Images

Toni Morrison, who has died aged 88, was the only African American writer and one of the few women to have received the Nobel Prize in Literature. The announcement of her 1993 award cited her as a writer “who, in novels characterised by visionary force and poetic import, gives life to an essential aspect of American reality”. In her acceptance speech Morrison emphasised the importance of language “partly as a system, partly as a living thing over which one has control, but mostly as an agency – as an act with consequences”.

She expressed her own credo, and indicated the core preoccupations of her fiction, in the fable at the heart of her speech, where she imagines young people telling an old black woman: “Narrative is radical, creating us at the very moment it is being created ... For our sakes and yours forget your name in the street; tell us what the world has been to you in the dark places and in the light ... Tell us what it is to be a woman so that we may know what it is to be a man. What moves at the margin. What it is to have no home in this place. To be set adrift from the one you knew. What it is to live at the edge of towns that cannot bear your company.”

When she started producing fiction, she was editing other writers for the publishers Random House in New York and began to feel the lack of novels which spoke to readers such as herself. Beginning with The Bluest Eye (1969), her novels portray the psychic and social lives of African American women, as well as men, covering the trauma of slavery and its economic and psychological consequences during and after the 19th century.

Her second novel, Sula (1973), provides a terse and vivid contrast between two black women, one a rebel and the other a conformist, whose stories and struggle to come to terms with one another and their community set the pattern for some of her later fiction. Song of Solomon (1977) is wider ranging historically and geographically and, unusually within Morrison’s oeuvre, has a black male character, Milkman Dead, as its main protagonist. Here the elements of magic realism suggested in Sula are developed and Morrison draws on the African American myth of slaves escaping by flying away as an image of Milkman’s discovery of his roots in a southern African American tradition. For this novel Morrison won the National Book Critics’ Circle award.

Many readers and critics on both sides of the Atlantic regard her highest achievement to be Beloved (1987), the first novel in a trilogy chronicling black American small town and urban communities over the past 150 years. It is based on a factual incident that she uncovered while preparing a historical collection, The Black Book (1974), and explores the terrible impact of slavery, its brutality and its dehumanisation, on a young mother who murders her child to prevent her being repossessed by the slave-owner from whom she has escaped. The mother and those who live with her are haunted by the memory of the dead child, and the novel is also a more general representation of the terrible history that continues to haunt African Americans, a history that must be confronted in all its anguish before black people can learn to love themselves and one another.

Beloved was awarded the Pulitzer Prize for Fiction in 1988, although not before a letter signed by more than 40 of America’s leading black writers and scholars had decried the lack of recognition for this outstanding novel. However, the New Republic critic Stanley Crouch felt the book was overwritten, and at times became trite and sentimental. Crouch was among a number of black critics who dismissed the award of the Nobel Prize as a mark of her ties to a European literary tradition rather than an African American one.

Morrison won it following the publication of Jazz (1992), a novel set in Harlem in the 1920s concerning a love triangle in which a husband murders his teenage mistress, which employs a narrative structure akin to jazz, with the opening statement of a theme and a series of elaborations.

Five years later, she published Love (2003), a family saga that has some similarities to The Song of Solomon in that it weaves its story around the lasting impact of a wealthy black patriarch and entrepreneur, Bill Cosey, the owner of Cosey’s Hotel and Resort, whose fortunes rest on the need for a holiday resort for black people in segregated America. Like The Song of Solomon, this novel records the historical and cultural changes affecting African Americans from the 1930s till the 80s, before, during and after the civil rights movement. Morrison’s ninth novel, A Mercy (2008), is set in 1682 in the early years of colonial Virginia, where English, Dutch, African, Portuguese and Native Americans compete to survive and rule.

Her next novel, Home (2012), moves forward to the 20th century, portraying the life of a Korean war veteran in segregated 1950s America and his attempt to save his sister from medical experiments carried out by a white doctor. It is dedicated to her son Slade, who died in 2010 aged 45, and with whom she had written several books for children. In an interview recorded soon after the publication of Love in 2003, Morrison spoke of her lifelong concern as a writer to move away from a notion of writing by African Americans as sociology, influenced by its awareness of a white readership, and concerned with the encounter between black people and white people. She had declared in a 1998 interview: “The black narrative has always been understood to be a confrontation with some white people ... They’re not terribly interesting to me. What is interesting to me is what is going on within the community. And within the community, there are no major white players. Once I thought: ‘What is life like if they weren’t there?’ Which is the way we lived it, the way I lived it.”

Morrison sought to change not just the content and audience for her fiction; her desire was to create stories which could be lingered over and relished, not “consumed and gobbled as fast food”, and at the same time to ensure that these stories and their characters had a strong historical and cultural base. She also compared her writing and its technique to music whose enjoyment and significance can change on a second hearing, and which has a style, structure and tone that is specifically African American.

Born Chloe Ardelia Wofford in Lorain, Ohio, she was the second of four children of working-class parents, George Wofford, a shipyard welder, and his wife, the former Ella Ramah Willis, who had migrated to Ohio from the south. When she was about two years old her family’s home was set on fire by the landlord while she and her family were in it. “People set our house on fire to evict us,” Morrison later told an interviewer, but her father refused to be intimidated by white hostility and told her that such actions merely demonstrated the inferiority of white people.

Her parents encouraged her early interest in literature, which encompassed Austen, Flaubert and Tolstoy. But an interest in narrative and the African American tradition was also nurtured by her father, who told her stories and anecdotes he had heard as he grew up in the south. She graduated with honours from Lorain high school and studied humanities at Howard University in Washington DC, the most prestigious of the historically black universities founded in the 19th century.

At Howard she changed her name from Chloe to Toni (having taken the name Anthony on becoming a Roman Catholic at the age of 12), apparently because she found that people constantly mispronounced “Chloe”. However she later regretted the name change, saying in 1992: “I am really Chloe Anthony Wofford. That’s who I am. I have been writing under this other person’s name. I write some things now as Chloe Wofford, private things. I regret having called myself Toni Morrison when I published my first novel, The Bluest Eye.”

One of her achievements there was, in her own words, to help develop a 'canon of black work'

In 1954 Morrison went on to study for an MA in English at Cornell University, writing a dissertation on suicide in the works of William Faulkner and Virginia Woolf. Thereafter she taught at Texas Southern University in Houston, and then Howard University.

In 1958 she married Harold Morrison, an architect. They were divorced in 1964, and Toni moved to New York with her two sons, Harold and Slade, to become a senior editor at Random House, a position she held for 20 years. One of her achievements there was, in her own words, to help develop “a canon of black work. We’ve had the first rush of black entertainment, where blacks were writing for whites, and whites were encouraging this kind of self-flagellation. Now we can get down to the craft of writing, where black people are talking to black people.” Among the distinguished black Americans she helped publish were Toni Cade Bambara, Gayl Jones, Angela Davis and Muhammad Ali. Her projects at Random House also included editing The Black Book, an anthology of items illustrating the history of African Americans.

In 1989, following the success of Beloved, Morrison was appointed professor of humanities at Princeton University. She was a visiting professor at Yale University and Bard College, and found teaching and being with young people an important way of “staying current”. Her 1990 series of Massey lectures at Harvard were published as Playing in the Dark: Whiteness and the Literary Imagination (1992), and explore the construction of a “non-white Africanist presence and personae” in the works of Poe, Hawthorne, Melville, Cather and Hemingway, arguing that “all of us are bereft when criticism remains too polite or too fearful to notice a disrupting darkness before its eyes”.

She is survived by her son Harold, and three grandchildren.