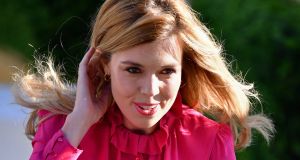 Why is it that when men in positions of power make idiots of themselves, commit some transgression, fall out with one another – or, in this case, manage to do all three – it is the women on the periphery who often end up the subject of sneering vitriol in the media?

It’s not as if there wasn’t ample material for derision already in the chaotic accounts of the Dominic Cummings/Boris Johnson/Lee Cain meltdown as the Brexit talks reach their 11,983rd crunch phase last week.

To recap: Cummings departed from Downing Street after a row over a sudden reversal of a planned promotion of his pal, the former tabloid journalist Lee Cain, to position of communications chief.

Cummings, it is also worth repeating (not that anyone will have forgotten; it’s worth repeating purely for the joy it brings) is the Downing Street adviser who broke Britain’s lockdown in March by going to visit his parents, and then broke it a second time by going for a drive to “test his eyesight”.

Relations have evidently soured between Johnson, Cummings and Cain, and both departed their jobs last week amid – depending which paper you read – a furious showdown, or a good-natured chat and a chuckle about old times.

So why was it Carrie Symonds – Johnson’s partner and the mother of his somethingth child, Wilfred – who ended up the subject of so many nasty, misogynist headlines in the fallout, several portraying her as a demanding, unstable wannabe Princess Diana?

According to BBC political editor Laura Kuenssberg, one of the reasons for Cain’s departure may have been that Symonds was “deeply unhappy about the plan” to promote him. The Telegraph posited that the relationship between Symonds and Cain broke down after she posted a picture on Instragram he didn’t like. The Financial Times suggested that Johnson was unhappy with mean text messages his aides had written about Symonds. And if all this strikes you as deeply reminiscent the latest political drama to grip the social circle occupied by your 12-year-old, you’re not alone.

The upshot was that Symonds – along with press spokeswoman Allegra Stratton and policy adviser Munira Mirza – may have been involved in vetoing Cain’s promotion, reportedly because they objected to the “blokey”, “macho culture” he instilled. (Wait, Symonds doesn’t like blokey and macho? Has she actually met her boyfriend?)

Separately, Kuenssberg also reported that several MPs, ministers and government insiders had shown “consternation” at the idea that the head of Vote Leave would take on such a crucial role during a time of delicate Brexit negotiations. This sounds a lot less like the plot of an episode of EastEnders, and therefore much more plausible. But it wasn’t nearly so sexy a narrative as the idea that his promotion was spiked by a Symonds stiletto with the help of her conniving girl gang, so no one really pursued it.

Rather, the story went, the nervy boyos in the Vote Leave faction were afraid that Symonds was “trying to run the government by WhatsApp”. (Some people might say Symonds could hardly have done a worse job than Johnson if she had been running the government from her phone – or even from her son’s toy phone, with her eyes blindfolded, while changing a nappy with one hand and ruffling her beloved’s hair with the other. But, again, that’s beside the point.)

The Mail gleefully reported that Johnson was furious that Cummings had taken to referring to Symonds as Cersei, after the bloodthirsty queen in Game of Thrones, or “Princess Nut Nut”, frequently denoted over text by a princess emoji followed by two nut ones. Har-di-har, chaps.

The drama may be delicious, but the Lady Macbeth tropes wheeled out on occasions like this are jaded and sexist. The subtext is, always, that women should know their place and not emasculate their men with their notions on things as important as matters of state.

It’s 12 years since Barack Obama was first elected in 2008, and his powerful lawyer wife and adviser Michelle had to be neutralised with the cheerily unthreatening title of “mom-in-chief” so as not to upset the sensibilities (for “upset”, read “terrify”) of male voters.

Times have moved on, but not all that much. Witness the vitriol directed at another woman perceived to have designs on another of England’s most beloved cheekie chappies – Meghan Markle. Markle took herself out of the picture and off to Los Angeles earlier this year. Princess Pushy is out of the picture, leaving a vacancy for most hated woman in tabloid Britain. Step forward, Princess Nut Nut.

This may be an embarrassing, gossipy sideshow, but it’s an embarrassing, gossipy sideshow whose outcome is likely to have a real and material impact on the Brexit talks, with all of the implications for Ireland.  Manfred Weber, the leader of the largest party in the European Parliament and a political ally of Angela Merkel, last week lamented the “chaotic situation” at the heart of No 10 and blamed it for deadlocked talks.

Last week, Johnson was reported to have said “I am giving the job to Allegra. I’ve got to do this because if I don’t, Carrie will go f**cking crackers about it”, as though he’s just an innocent stooge incapable of thinking for himself, and utterly at the mercy of his scheming, Machiavellian enchantress of a fiancee.

If that really is the case, Britain doesn’t have a Carrie Symonds problem. It has a Boris Johnson problem.