It’s not romantic, but you can never have too much resilience in a marriage 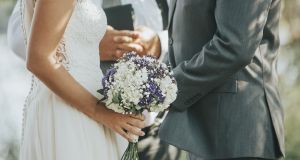 Hilary Fannin: ‘I’d have quite liked it if someone had encouraged my spouse and I to write to each other on the morning of our nuptials’. Photograph: iStock

I attended a winter wedding in Dublin recently. It was a picturesque occasion. After the ceremony the bride, delicate as a snowdrop, posed with her new groom for photographs against a display of redbrick turrets and pretty eateries, festooned in fairy lights, on Exchequer Street.

I like that part of town. I have a friend who used to rent a flat on that same street, above a shoe shop that sold leopardskin stilettos. She used to buy her groceries from the trendy food store across the road and sit writing and studying at her window overlooking the busy district outside.

I was covetous of her single, metropolitan life. In the suburbs, peeling potatoes and crawling around under the stairs looking for matching shinguards, I’d imagine myself into her dizzying freedom.

Without casting aspersions on my friend’s former choice of neighbourhood, I read somewhere that in the 18th century, long before it was a haven for frothy lattes and even frothier rents, Exchequer Street was awash with brothels. Apparently its reputation was so bad that finding respectable tenants for the properties there was almost impossible.

By the 19th century, however, there was a temperance hotel on the street. I suspect this may have been the Central Hotel, which now houses the Library Bar, a fine spot for turret viewing and a place where I myself may have been less than temperate on one or two occasions.

From tarts to temperance to wine bars (and shoe stores and artisan grocers with kumquats nesting in wicker baskets) to pretty young thangs celebrating their nuptials on the eve of a shiny new decade, the street seemed to pulse with history in the steely light of that recent December afternoon.

Dublin seemed in a benign mood as the bride, defying the plummeting temperatures, patiently posed for photos in her lacy backless dress. Passing cyclists swerved to avoid stray bridesmaids, passers-by in winter coats wished the young couple luck, and even the drivers bore the disruption pretty gamely, although the wedding cohort did finally have to move to a side street.

I watched the photographer work there for a while, watched the images solidify, watched this long-anticipated moment begin its journey towards memory.

The ceremony had been a humanist one. We’d gathered under the eaves in the top room of one of the street’s hostelries and listened as the celebrant, a brilliantly vivid and dynamic woman, talked about the humanist view that long-term partnerships are strongest when built upon support, equality and honesty.

We listened then to readings and the couple’s self-penned vows, and candles were lit, music was played and the hands of bride and groom were bound with ties in a symbolic knot. At one stage their rings, held inside a small pouch, were passed among the congregation (if that is still the correct term to describe us suited-and-booted witnesses to this gentle ritual).

The celebrant asked each of us to hold the ring bag for a moment and to make a silent wish or intention for the couple’s union. I made a mute plea for resilience. It’s not romantic, I’ll grant you, but unlike toasters or sambuca shots, I figure that you can never have too much of it.

Nearing the end of the celebration, the couple were encouraged to place sealed letters they’d written to each other inside a wooden box that already contained a bottle of champagne. The box was then closed, with an instruction from the celebrant that both the letters and the bubbly should be opened on the couple’s fifth wedding anniversary.

There was, however, an addendum to this stipulation: should the couple, between then and now, find themselves seriously rowing or falling apart, they could open the box, rinse out a couple of glasses, pop the bottle and read their wedding missives.

I watched the couple smile at each other, caught entirely in the moment, in the electrifying now. Five years probably felt like an eternity to them, and dispute or despair even more distant than that.

I’d have quite liked it if someone had encouraged my spouse and I to write to each other on the morning of our nuptials and secrete the letters with a casket of champagne. Mind you, as the parents already of two small children, we’d probably have written promising merely to desist from leaving the lid off the omnipresent Calpol bottle or to spontaneously empty the washing machine a bit more often.

Support. Equality. Honesty. You can’t get fairer than that I suppose. If it was a three-cornered field, I’d camp in it.

Paul Flynn: ‘Cook these comfort dishes, rub your bellies and think of me’
10