Helen and Brendan Dillon: Couple died within fortnight of each other

Lives Lost to Covid-19: Dubliners married after falling for racing and each other at Fairyhouse 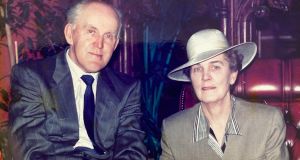 Helen and Brendan Dillon lived all their married life in Clontarf.

Helen and Brendan Dillon grew up less than a mile from each other in Dublin’s north inner city.

They met in their 20s when both worked for then State agency the Land Commission, were married for 61 years and died within two weeks of each other to be buried together in Glasnevin Cemetery.

She was 87 and he was just three weeks shy of his 92nd birthday.

Helen McCormac, as she was then known, lived on Susanville Road in the shadow of Croke Park while Brendan was raised on Addison Road in nearby Fairview.

The couple married in September 1958 and lived all their married life in Clontarf.

Brendan moved to the then department of social welfare, while under the traditional ban on women working after marriage, Helen had to give up her job.

She stayed home to mind their five children – Paul, Maeve, Michael, Conor and Sarah – but got involved in business again when her husband started an enterprise creating a form sheet for horse racing.

Their son Paul recalls that in the early 1960s the sheet was a precursor to the modern online form sheet that offers information on horses and their riders.

For more than 20 years they worked evenings and weekends, producing the sheet. “Mam did all the operational side, the typing, the collation of data and Dad did the production.”

As for the form sheet itself “it was sold by the likes of myself and other youngsters at every race track around Dublin, Kildare, Meath and Galway” says Paul, and was the standard Curragh form sheet until the late 1980s.

Always active, Helen and Brendan had different but complementary interests. Brendan played a bit of cricket in his younger days and greatly enjoyed pitch and putt. But his favourite pastime was classical music, about which he was a true expert.

A member and archivist for the Bohemians Musical Society, a “gentlemen’s singing club” which still meets once a month, Brendan was also involved in the ‘43 singing club, named after the year it was founded.

Helen was not particularly sporty but was involved in Clontarf’s Oulton tennis club for about 25 years, where she did a bit of work behind the bar and met most of her female friends, says her son.

“Dad was very involved in Clontarf and Raheny Bridge clubs. Mam loved poker and we spent a lot of time with family down the country and we all played poker.”

Brendan was also involved on the committee of the Sea Scouts in Dollymount where all three of their sons were members.

The family went on their annual holidays every summer to Rush and when the children were grown the couple went on cruises in the Baltic and off the coast of Africa.

If classical music was Brendan’s favourite pastime, Helen’s was westerns. “There wasn’t a western that she couldn’t tell you about, including who died and who was about to be killed. She must have seen every western ever made up to about 1980 two or three times.”

She also loved TV detective series and insisted that for her funeral the entrance song should be the theme music from Inspector Morse.

“She also insisted that the theme music from a famous 1970s series called The Thorn Birds be played when she was being brought out of the church.”

Brendan was a walker who up to the age of 89 walked 10-12 miles a day and in his late 70s climbed Ben Nevis in Scotland with his son Michael and two of his sisters.

Over the last two years he had slowed down but still walked every day using a walking frame.

The family took all precautions and “we thought they were safe”, says Paul. They were not in a nursing home setting and Maeve and Michael were their linchpins, alternating staying with their parents, with some help from carers.

But Covid-19 still struck. One evening Brendan went for his usual walk, came home for dinner and enjoyed a glass of wine. The next day he was in the Mater hospital where he died five days later on April 21st.

Helen could not attend the funeral and her last sight of her husband was looking out the window and waving at his coffin as the hearse passed their Castle Grove home where so many of their neighbours stood and applauded in tribute.

The hearse paused again outside their son Michael’s home en route to Glasnevin as he was also in isolation with coronavirus. Their daughter Maeve was unable to attend, caught in Brighton because of the pandemic restrictions.

Some days later Helen began to display symptoms and was admitted to hospital, where she died on May 3rd, five hours before the birth of her great-granddaughter Ruby.

Again their neighbours stood in tribute and applauded when the hearse stopped outside the couple’s home. “They put a floral display on the front driveway – it was magnificent,” says Paul. Their tribute “made such a difference” to a family doubly bereaved.