Sleeping in the spare room has morphed from punishment to reward

Sean Moncrieff: Night time routine can be noisy and action-packed - just not in a good way 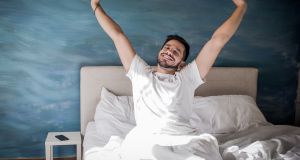 Sleeping in the spare room has morphed from being a punishment into a reward.

Herself and myself are light sleepers. If one of us snores, sniffs, scratches or swallows, the other one wakes up. If I gently wake her to tell her she’s snoring, she denies having been asleep at all. If she gently wakes me, I scream and have to be peeled off the ceiling.

I suffer from what we call jerky leg, but what Dr Google terms Restless Leg Syndrome: just when you get comfortable, you have to get out of bed and stretch. We both get the full-body shudder, which is when you’re nodding off and your body decides that a stranger has entered the room and is about to slap you across the face.

Yeah, yeah, yeah: the answer is to not smoke, drink, eat red meat, consume anything with sugar or caffeine. Limit time on the phone or watching TV to 57 seconds a day. Practise mindfulness and go for a 5km run before bedtime.

Alone, we can snore and thrash around the bed and break wind with wild abandon

Anyway, back in the real world, we also have a severe temperature difference. She’s boiling while I’m freezing. There are periods during Spring and Autumn when we briefly harmonise, but the rest of the time we seem to exist in different climates.

On top of all that, there is the leeching stress of the pandemic and our current season, an evil twin of summer, depriving us of vitamin D. Our night time routine can be noisy and action-packed. Just not in a good way.

Unsurprisingly, every now and again one of us gives in and decamps to the spare room. Since the start of the pandemic this has happened more often and increasingly by prior arrangement: to give each other a break from each other.

Alone, we can snore and thrash around the bed and break wind with wild abandon. There’s still the jerkiness, but not the anxiety of waking the other person up. To quote that old song cliché, it’s wrong but it feels so right.

It’s wrong - or it feels that way - because relationships aren’t supposed to operate like that. There’s a massive sense of safety and comfort in crawling into bed beside the one you love. You get to cuddle; and the other stuff too.

Circumstances and energy levels aren’t what they used to be, and that’s okay

Sleeping separately also carries an anxiety that this is the thin end of the wedge. That the couple is giving up. That they are turning into their parents.

And traditionally, sleeping in the spare room only happened after a row. Now it’s morphed from punishment to reward.

Yet when I looked it up, a massive proportion of couples do it permanently. A survey in the US found one in four couples sleep in separate beds. Steph and Dom, the posh-jolly people who used to be on the British Gogglebox, maintain separate bedrooms and are rather delighted about it.

They claim it has benefitted their relationship, even when it comes to nookie. They have date nights. She visits his room, then ‘leaves him with the mess’. Whatever that means. Some stinking-rich celeb couples live in separate wings of their massive houses or in different houses altogether.

We don’t want to go that far. Partly because the spare room isn’t that spare, and also because it feels unnatural not to experience the physicality of the other person.

I don’t mean sex, but everything else. The way they put on their socks, or chew. Or take a weird arms-akimbo stance after applying deodorant. Or snore. (Herself would like me to point out that I conjured these examples from my imagination and that they have nothing to do with her.)

But perhaps the lesson here is about how relationships change over time. Circumstances and energy levels aren’t what they used to be, and that’s okay.

There are still plenty of ways to express the most profound feelings. Listening to your partner honking at 3am and resisting the urge to smother them. There is no greater love.