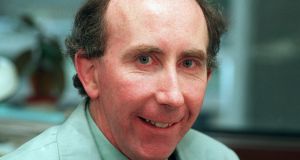 The old adage that if you do something well enough the world will beat a path to your door wherever you are or how far below the horizon of public recognition you wish to be, and this might be said to have been true of Aidan Moran, who has died, aged 63, after a five-year battle with cancer.

Dr Moran, professor of cognitive psychology at University College, Dublin (UCD), a chair which had been created especially for him in 2007, did not, however, allow his illness to stop him working, and finished writing his last academic paper with a colleague only a fortnight before his death in March.

For a man with an international reputation as a sports psychologist, Moran led a decidedly restrained and understated life. He spent all of it– save for six years lecturing at University College Galway– in Stillorgan south Dublin, where he grew up, rarely if ever taking foreign holidays, and leaving Ireland only to partake of conferences with fellow psychologists and to avail of scholarships.

These included a Fulbright scholarship and the Stevens International Research Award at the University of Florida, and the President of UCD’s Research Fellowship. As his brother Dermot, also an academic and professor of philosophy at Boston College in Massachusetts, put it in a eulogy at Moran’s funeral: “Aidan was a gentle, quiet boy” as a child, and “a homeboy” at heart. The exotic held little appeal for him.

This steadiness of personality was perhaps very useful, indeed maybe crucial, in a teaching and research career lasting from 1979 until 2020, during which Moran wrote or co-wrote 452 academic papers and published over 20 books.

These included a seminal work, Sport and Exercise Psychology: a Critical Introduction (Routledge, 2004), and the much-acclaimed Pure Sport (Routledge, 2008) (with John Kremer of Queen’s University, Belfast), which was, and is, renowned globally for its easy-to-read fluent style underpinned by rigorous science.

He was also the founding editor-in-chief in 2007 of the International Review of Sport and Exercise Psychology.

Dr Kate Kirby, head of psychology at Sport Ireland in Abbotstown, Co Dublin, and also from last year head of psychology for the Irish Olympic squad, who completed her PhD under Moran as supervisor, told The Irish Times this week that “his books were required reading” when she was doing post-graduate study in the UK.

She said that wherever she went internationally to sports psychology conferences, when people realised he was Irish they always asked her “do you know Aidan Moran?”

Moran had also earlier held the post of psychologist to the Irish Olympic team.

Although today sports psychology is accepted as a norm when training Irish athletes of any discipline, when Moran started his work in the subject during the 1980s in Ireland many looked askance at the practice.

As Kirby recalls: “There was a lot of scepticism…even when I started in 2005 there were still a lot of unqualified people giving advice off the top of their heads, often alienating young athletes from their sport. It was the wild west [of sport] and quite unregulated. Aidan, through his [academic] supervision, brought a whole new generation of sports psychology practitioners [into sport in Ireland].”

Among the sportspeople to benefit from Moran’s direct work with them were Ken Doherty, during the run-up to his victory in the 1997 World Snooker Championship; Ronan O’Gara in his days with Munster; twice British Open-winning golfer Pádraig Harrington; and John Maughan, legendary manager of the Mayo senior football team, who sought Moran’s advice in 2004 during the county’s campaign to reach All-Ireland finals.

When Sport and Exercise Psychology was published, Harrington launched the book for Moran. Yet Kirby says that Moran’s work with major sportspeople often went unnoticed as “Aidan was never one to talk about it”.

Moran’s work was grounded in the specific discipline of cognitive psychology. UCD, in a statement on its website in tribute, described Moran as “a leading thinker on theoretical and conceptual issues regarding the processes of attention, concentration, thinking, reasoning, decision-making, memory, imagery, mental practice, and skilled behaviour…in this role Aidan revolutionised the way undergraduates were taught experimental psychology at UCD … he developed a rigorous system for teaching undergraduates how to use the scientific method, and up-to-date equipment to investigate psychological phenomena.”

His achievements were widely recognised internationally, and Moran was elected a Fellow of the British Psychological Society and also of the Association for Psychological Science of the United States.

He was a keynote speaker at several international conferences, including that of the Association of Applied Sports Psychologists in Phoenix, Arizona, in 2016.

Moran was himself a keen sportsman, especially fond of soccer, golf and tennis. Very fit for nearly all his life, he never smoked or drank alcohol.

Aidan Moran was one of four children of Patrick and Nora Moran, a civil servant and nurse respectively. Educated at Oatlands College CBS in Stillorgan, and UCD, where he took a first-class honours BA and MA in psychology, he worked for a year as a research psychologist for FÁS, the then employment training agency of the government ,before becoming a lecturer .

His mother had worked in Nottingham, England, during the second World War, where she was one of a small group of Irish nurses who treated injured German prisoners of war: the British nurses refused to treat them, and the Germans were afraid they would be poisoned, so only Irish nurses could tend to them.

He is survived by his widow Angela O’Donoghue, a primary school teacher whom he married in 2004, their son Kevin, and his brothers Dermot and Ciaran, and sister Patricia.