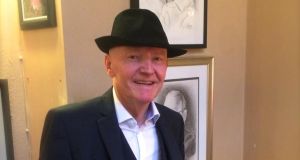 Gerry Sinnott revived the Olympia Threatre after a difficult period in the 1970s following the collapse of the theatre’s proscenium arch in 1974.

When a celebratory night was held at Dublin’s Olympia Theatre in May 2014, to honour its former owner, Gerry Sinnott, President Michael D Higgins, in a special message and with his usual verbal acuity, summarised Sinnott’s achievement succinctly: “Gerry has shown enormous commitment and dedication to the artistic community,” he said, recording his admiration for the impresario’s “skill, professionalism, perseverance and hard work”.

Sinnott, who has died aged 78, was truly a man of many parts, both literally and figuratively. He grew up in Nenagh, Co Tipperary, where he was apprenticed as a printer on the local newspaper, the Nenagh Guardian, at the age of 14 after national school at the local CBS, and took his first theatrical steps there in local drama societies.

Fluent in Irish, he made such a mark in a play at the All-Ireland Gaelic Drama Festival in Thurles, aged 20, that the adjudicator compared him favourably with the great Abbey Theatre actor FJ McCormick. He appeared a year later at An Taibhdhearc in Galway, where he was spotted by Ernest Blythe, the Abbey’s long-serving director, who cast him in a play at the theatre with, among others, a young Donal McCann.

He was discouraged by its director, Frank Dermody, from pursuing any further professional career on the stage, as he told Maev Kennedy in an interview with this newspaper in 1984: “It was shattering at the time, but in retrospect it was a good thing, because now I think I’ve found my niche.”

Indeed he had, as a producer. Sinnott was being interviewed shortly after he had taken over as managing director of the Olympia, having previously made his mark very gradually in amateur theatre in Dublin, where he ran a printing business, Aungier Print. Remarkably, throughout his professional theatrical producing career, he continued to run this business.

Sinnott introduced a novel addition to Dublin’s nightlife in 1991, with Midnight at the Olympia, a late-night showcase for rock acts and other musical talent, which brought him into what was to become a successful business partnership with Denis Desmond and MCD Productions; Desmond’s company would eventually buy the theatre from Sinnott, who had by that time become the sole owner of the theatre.

Sinnott proved he was not afraid to court controversy, notably staging Jane Martin’s Keely and Du, a play with the theme of abortion, for the Dublin Theatre Festival in 1993, which memorably starred Louise Fletcher, who had created the nightmare matron, Nurse Ratched, in the film One Flew Over the Cuckoo’s Nest. In 1998, he became the first Irish producer to cast two young black Irish actors, Peter Smith and Samantha Mumba, as the leads in a show, the Christmas pantomime for that season.

Sinnott could be said to have saved – or at the very least revived – the Olympia, after a difficult period in the 1970s following the collapse of the proscenium arch in 1974 and the theatre’s prolonged closure for repairs thereafter, necessitating its takeover by Dublin City Council.

Sinnott was one eight children of Thomas, a retailer, and Molly Sinnott (née Friel), a homemaker, and is survived by his children Fiona, Shane and Tara; his former wife, Ann Williams, an actress; and by his sisters Eileen, Therese and Dolores, and his brother, Thomas. His sisters Miriam and Angela, and his brother Patrick, a Royal Navy sailor who was killed while serving on HMS Amethyst in the Yangtze river incident in 1949, predeceased him.