Ross O’Carroll-Kelly: A trip to Center Porcs leads to an encounter with one of Sorcha’s frenemies 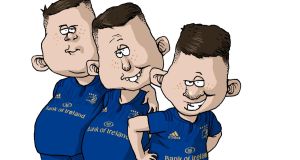 ‘Oh my God... have you been letting them watch The Wire again?’

The boys are up at, like, five o’clock in the morning, bouncing off the actual walls. Brian and Johnny both grab a handful of my Leinster Under Armour training top and drag me out of the bed onto the floor, while Leo stands with his nose about two inches away from Sorcha’s face, shouting, “Wake up! Focking wake up!”

Yeah, no, it’s that time of year that every parent dreads – we’re talking midterm.

Honor is suddenly standing in the doorway of our bedroom, going, “Er, I said this would happen?”

Yeah, no, we’re bringing the kids to Center Porcs for a few days. It was supposed to be a surprise – as in, the plan was to tell them when we were on the road to actual Longford. Except Sorcha couldn’t keep it to herself and ended up blabbing just as we were tucking them into bed. And now it’s the middle of the night and I’ve got Brian dragging me across the bedroom floor by my legs while Johnny tries to forcibly dress me.

“We might as well get on the road,” Sorcha goes, throwing back the duvet.

Which is what we end up doing, after I enjoy a quick farmer’s breakfast –– in other words, a drink of orange juice straight from the corton and a long stare at myself in the mirror while wondering what the fock I’m doing with my life.

Honor dresses the boys, then we set off in search of the mystical N4.

Sorcha, we’re southsiders. If you stood here for a year, you’d see 90 per cent of the people you’ve ever met in your life

They don’t shut up for the entire journey. Brian is going, “Yo, you got some chrome balls showing yo face in jects, working man. You gonna wind up in chalk, just like Weezer and Lil Bo.”

“Oh my God,” Sorcha goes, “have you been letting them watch The Wire again?”

I’m there, “It’s the only thing that keeps them quiet when you’re out at work, Sorcha.”

“Ross, you’re supposed to be home-schooling them, not letting them watch boxsets.”

But then right on cue, letting me down in a big-time way, Leo goes, “How bout I serve you one point-blank, centre-mass you poot-butt motherfocker?”

Sorcha gives me an absolute filthy look, then goes back to reading her brochure. “Oh my God,” she goes, “I can’t wait for the Subtropical Swimming Paradise? It’s supposed to be like Quinta do Lago – except outside it’s Ballymahon.”

“No, Johnny, look at this – it’s got slides and even water rapids!”

Honor goes, “You’re wasting your breath on them. Laser Combat is all they want to do. As a matter of fact, we’ve printed off a map of the forest, haven’t we, boys?”

“I’m a leave a trail of fire behind me!” Leo goes. “Motherfockers don’t know who they be bumping with!”

“Yeah,” Honor goes. “We’ve drawn up, like, tactics and everything.”

I’m there, “I love to hear my children talking about tactics. They definitely get that from me.”

Sorcha goes, “Ross, they are not playing any game that encourages them to glorify in guns and violence.”

“At the same time, I wouldn’t mind seeing the map.”

“Ross, that’s the end of the matter.”

Anyway, we arrive, check into our lodge, then stort exploring the actual place. For those of you who haven’t had the pleasure, Center Porcs is kind of like a south Dublin version of The Truman Show – everyone walks around smiling and saying hello to each other, although in their eyes you can see that no one is quite comfortable being this far from a Donnybrook Fair.

I’m like, “Sorcha, we’re southsiders. If you stood here for a year, you’d see 90 per cent of the people you’ve ever met in your life.”

We all turn around. It ends up being Suzanne Menzies, an old frenemy of Sorcha’s from her Irish debating days, ex-Loreto on the Green and – if the truth be told – ex-Ross O’Carroll-Kelly as well.

They fake-smile each other, then fake-hug and fake-air-kiss each other, before Suzanne introduces us to her husband, some randomer called Steve, then her three sons, who end up being annoyingly polite.

And Sorcha’s like, “This is Suzanne Menzies, boys. I debated with her back in the day.”

Suzanne goes, “Yes, I also know your daddy,” and she gives me a look. There’s a little bit of her that will never forgive me for agreeing to go to her debs and then just not bothering my hole to show up on the night.

“Sorry, it’s just that you look – oh my God – exhausted! But then I heard you’re back working full-time.”

Yeah, no, she’s a something-something-or-other in LinkedIn.

Sorcha goes, “Yes, I’m juggling a lot of roles at the moment. But then I’m fortunate to have such a supportive husband. He’s actually home-schooling our boys.”

Suzanne’s like, “Yes, I’ve seen him letting them run wild around Dalkey. They say it takes a village to raise a child – that’s definitely your approach to parenting, isn’t it, Ross?”

Brian goes, “Off-brand b**ch be running her mouth, yo,” saying exactly what the rest of us are thinking, except in obviously Baltimore street slang?

Suzanne goes, “Anyway, it’s lovely to see you! Enjoy Center Porcs – although I’m sure it won’t be long before your kids are banned from here just like they’re banned from apparently everywhere else, including Tayto Pork! Sorry, that was just a joke!”

We stand and watch them walk off in the direction of the forest. Sorcha has tears in her eyes but then I notice her face suddenly horden and she silently mouths the Mount Anville school motto. Oderint dum metuant – let them hate, as long as they fear.