This lump of wax with a wick in it has flown off Goop’s shelves. How gullible are we? 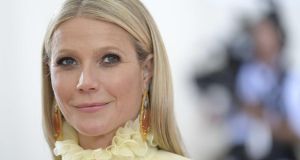 This Smells Like My Vagina: there’s nowt quite so queer as Gwyneth Paltrow when it comes to finding new ways to fiddle around with one’s fanny. Photograph: Nina Westervelt/New York Times

“There’s nowt so queer as folk,” my Granny Nora used to say, blowing smoke rings at the ceiling, a baby bottle of Powers nestling in her cardigan pocket – and, bless her baggy cotton stockings, the woman wasn’t wrong.

Sadly, Nora shook off the mortal coil long before Gwyneth Paltrow, actor and celebrity sinewy person, began amusing the world with her New Age lifestyle advice and accoutrements as curator of the online publication Goop, a business that is reportedly now worth more than €200 million.

You’ll excuse the alliteration when I posit that there’s nowt quite so queer as Gwynnie when it comes to finding new ways to fiddle around with one’s fanny.

Not content with advising her female followers to steam-clean their vaginas by perching over buckets of steaming mugwort or waving sheaves of smouldering garden herbs around their nether regions, Gwynnie got herself into some legal hot water in 2018 by recommending that her disciples might also consider whacking a jade egg up their yoni (her word, not mine).

But it’s her latest confection, a candle called This Smells Like My Vagina, that really takes the biscuit. (Were she to have a biscuit, that is, as opposed to three deep breaths and a sliver of dried sea lettuce.) This particular lump of wax with a wick in it, which has, incidentally, flown off the Goop shelves, retails at a mere £58, or about €67, per olfactory offering.

Is it too crass to ask whether if Prince Harry were to market a lump of beeswax called This Smells Like My Scrotum, we’d be rushing to fragrance our living rooms with it?

There are questions to be asked here. Why market a candle called This Smells Like My Vagina in the first place? How did Gwynnie guess that there was such a stack of dosh to be made out of gullibility and body perfectionism? And who would spend their hard-earned cash on a candle that claims to smell like a body orifice? (Is it too crass to ask whether if, say, Prince Harry – now he’s obliged to earn a buck – were to market a lump of beeswax called This Smells Like My Scrotum, we’d be rushing to fragrance our living rooms with it?)

If you’re in the market for the product, the candle apparently has accents of bergamot, damask rose and geranium. The geranium tones may well have come from all that squatting over the herbaceous border, although I’m really not qualified to say.

But why let a vagina flambeau be the end of the story? Why not suggest to the Goop marketeers that, given its undoubted success, they might push the envelope a little further, maybe by inducing the yoga-loving Gwynnie to create a candle called This Smells Like My Perineum After a Dozen Downward Dogs and a Sun Salute?

What is the best exercise for you?
8