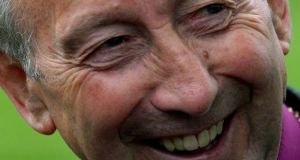 Although he retired in 2002, Bishop Emeritus Mehaffey maintained a high profile as a supporter of the peace process in Derry. Photograph: Trevor McBride

Retired Church of Ireland bishop of Derry and Raphoe James Mehaffey who has died aged 88 was a “peacemaker” during the darkest days of the Northern Troubles.

Appropriately his funeral in Derry last Saturday took place on the same day that the the Stormont Executive was being restored after a three-year hiatus.

The coincidence was not lost on former All-Ireland primate Lord Robin Eames and others from across the traditional religious divide who paid tribute to Mehaffey and in particular his pioneering partnership with the late Roman Catholic Bishop of Derry Edward Daly in promoting reconciliation and condemning violence for political purposes.

Lord Eames recalled how “Bishop Jim” in accordance with his vows as bishop, “worked with Edward and other leaders to bind up the broken and heal the wounds of the lost”.

Archbishop of Armagh and Primate of All Ireland Eamon Martin lauded “the powerful and courageous witness of his co-operation and rapport with Bishop Daly during troubled times”.

That the praise was not mere ecclesiastical myth-making was made manifest by the large attendance at the service of thanksgiving at St Columb’s Cathedral from across religious, political, sporting and civic life.

Bishop Mehaffey lived the values that he preached every day ... love for our city and everyone who lives here

Current SDLP leader Colum Eastwood said “Bishop Mehaffey lived the values that he preached every day – generosity, compassion and an inextinguishable love for our city and everyone who lives here.” Sinn Féin MEP Martina Anderson said “Derry lost a champion of all of us” and UUP Cllr for Waterside Darren Guy described him as “a truly inspirational gentleman”.

Jim Mehaffey was born in the staunchly Protestant heartland of Portadown in Co Armagh and attended Portadown College where he was called for a trial with the Ulster U-17 rugby team. Moving to Dublin, he was educated at Trinity College before entering the Anglican priesthood in 1955.

His varied clerical life meant he learned his pastoral craft in curacies in Belfast and Deptford, rising to the rank of Minor Canon at Down Cathedral and later as Bishop’s Curate in Belfast. His rise towards the episcopacy was accompanied by incumbencies at Kilkeel and Cregagh.

In 1980, at the age of 49, when he was still playing rugby with Ballynahinch club and some 12 years into the Troubles, he was elected Bishop of Derry and Raphoe. There, he built on the foundational friendship already forged by his predecessor, Robin Eames, with Edward Daly. As Daly wrote in his memoir, A Troubled See: “James and I developed a very close friendship and we worked together very closely. We served together as founder Trustees on the Inner City Trust [which helped young trainee apprentices to rebuild Derry’s bomb-damaged city centre].

“We were founders of the Waterside Churches Trust,” Daly continued. “On the suggestion of the respective cathedral organists, we initiated the annual Two Cathedrals international music festival in the early 1900s.”

Often, their solidarity was tested by disruptive protesters from the Free Presbyterian Church opposed to ecumenism. On one occasion when both bishops were taking part in a carol service in the Guildhall a car bomb exploded outside without warning, “blowing in some of the windows, showering everyone with glass and causing widespread terror among the assembled congregation”.

Daly, a staunch supporter of Derry City FC, would often recall how Mehaffey experienced heated public criticism when he attended a football match with him on a Sunday afternoon in the mid-1980s. He officiated at many funerals of parishioners murdered by the IRA, including members of the RUC and UDR.

As well as issuing joint statements condemning sectarian killings during the Troubles and conducting carol services at home, the two men took part in speaking tours across America in 1988 and 1990. In Richmond, while wandering through a churchyard they were surprised to come upon the headstone of a John Doherty of Fahan, close to Derry, who had settled in Virginia in 1819; and they met Jim Baker, then US secretary of state, while preaching in an Episcopal Church in Washington DC which treasured a splendid stained glass window depicting the departure of St Columba from Derry to Iona.

Together, Daly and Mehaffey worked out positive responses for couples from different denominations in “mixed marriages”, then a major point of contention along with segregated schooling in inter-church relations.

Although he retired in 2002, Bishop Emeritus Mehaffey maintained a high profile as a supporter of the peace process in his adopted city, where in 2015 he was awarded jointly Freedom of the City of Derry with Bishop Daly for their cross-community leadership.

Bishop Mehaffey is survived by his “dynamic” wife Thelma and by their children Wendy and Tim. He was pre-deceased by their son Philip. Wendy summed up his approach to ministry and life: “One helps the other”, a message that serves as his epitaph.