Nothing terrifies Irish people more than being given an honest answer to ‘how are you?’

How am I? I feel like a microwaved s**t sandwich on stale bread that's gone cold 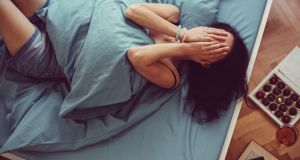 Nothing terrifies an Irish person more than crying and giving an honest answer to the question ‘How are you?’

My dad left school at 15 with a report card marking him almost illiterate. But he remains one of the most poetic people I know.

He has two ways to describe when a situation is less than ideal. It’s either a shit sandwich on stale bread or a bucket of shit with no handle. These are usually reserved for special occasions. Like when an elderly relative has died or when the lawn mower has stopped working.

A month ago, my GP asked how I was going. I replied I was feeling like both. My GP went “Ah”. My doctor’s office has up-to-date Tatlers and Vogues in the waiting room. The bathroom has posh soap in it from Arnotts.

People might tell her about various discharges and rashes but she’s probably never heard someone describe their health as “a microwaved shit sandwich on stale bread that’s gone cold”.

The bus driver was getting impatient. I stepped off, called a taxi and headed for the doctor’s

Then I cried. Which was more upsetting for her than me, I think. Nothing terrifies an Irish person more than crying and giving an honest answer to the question “How are you?” But I couldn’t hide behind “I’m grand thanks” anymore. I’d cried twice already that day. Once because someone folded my washing and the other because I’d patted a stray cat with a bung eye.

I had fainted a few times the week before. Getting up too eagerly for a biscuit or having a shower were now classed as extreme sports. Then one day I couldn’t get myself vertical at all without passing out.

I thought about going to hospital but didn’t. It could just be a hangover and if I got laughed out of the emergency department with a prescription for Dioralyte and a nice lie down I might as well have deported myself. Living out my days in self-imposed mortification exile.

Then came the day I had to politely interrupt a conversation with a co-worker to vomit in the bathroom. And one after that when I couldn’t read the auto-cue. (Not ideal, I am a TV reporter). Then an ATM took my card when I couldn’t remember my pin. I had to give up my ticket and the chance to make fun of my Mayo friends forever at the All Ireland semi-final.

I forgot to respond to texts, forgot birthdays (luckily my niece is too young to send passive-aggressive reminders, my ex-boyfriend definitely isn’t) and finally one terrifying afternoon forgot how money worked. I was staring in my hand, the numbers on the coins meant nothing. The bus driver was getting impatient. I stepped off, called a taxi and headed for the doctor’s.

Now I was being told I had a condition affecting my central nervous system as Enya played in the background. There might have to MRI scans. There would definitely have to be medication. There would also have to be vitamins and diet change.

The last was the most upsetting. I put vitamins in the same category as leggings that aren’t from Penneys, personal trainers and going to the dentist regularly. Things wealthier and healthier people do that aren’t for me.

I grew up in 1990s’ Australia where a cricketer with a dad bod, frosted blonde tips and a penchant for chain smoking was seen as peak athlete performance. Going for runs and understanding nutrition was for w***ers.

Then Sydney discovered avocados, acai bowls and cross fit. My local supermarket stopped selling Twix bars and replaced it with ethically grown cocoa squares. The more everyone posted their fun run photos, the more I resisted, clinging onto eating whatever I wanted and making fun of anti-gravity yoga classes.

While I’ll never drink a green smoothie, I’m seeing the benefit of eating decently and admitting to having health difficulties

Then I landed in Ireland, the land of beige food and multiple courses of spuds, and rejoiced. After all, taking care of your health is surely classified as notions.

Until my brain broke. In a foreign country where I have little to no family. I held off telling my parents as long as possible. My nephew is waiting for a heart transplant and has (quite selfishly in my opinion) monopolised everyone’s worrying abilities ever since the little bugger nearly died on us. I didn’t want to add to their stress 10 time zones away.

Australians are also very similar to the Irish – we’re not okay with saying things aren’t okay. Being half and half, I’m particularly bad. When I was told to take a month off, I went on an overnight press trip to the UK to film learning a musical dance routine. I thought taking time off would be a bit dramatic, impaired brain function or not. But then I copped on and called dad with the news.

“Sounds like a bucket of shit with a missing handle and a hole in the bottom,” was the response.

While I’ll never drink a green smoothie, I’m seeing the benefit of eating decently and admitting to having health difficulties. I’m back to a relative state of emotional stability, regardless of how many animals I’ve patted that day. I’m not ashamed to admit to going inside a health food store. Even dad had a crack at ‘wellness’ in the last couple of years – a Pilates class for a bad back.

His concise review of that class: “the most exercise you get from it really is holding in farts.”

Ask the expert: Dealing with a slap-happy one year old
10 Life after an ectopic pregnancy
Real news has value SUBSCRIBE