I left London 23 years ago pregnant, having become inexplicably afraid

Hilary Fannin: My urge to go home carried my son and me, and later his father, across the sea 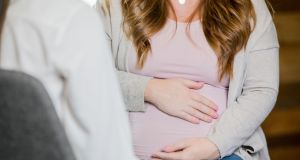 ‘I left London afraid that something would happen to the baby if I stayed’ Photograph: iStock

I was in London recently during a mini-heatwave, a hot spell that may, I realise, have been an entirely personal experience. My fellow passengers travelling on the Tube through, say, Oxford Circus, didn’t seem to be wilting and flailing around with quite the same level of intensity that I managed to muster.

Disgorged from the mouth of the Tube like a distressed Southern belle one evening, on the way to a large industry gathering of people I’d never met before, I had to lean against the cool Underground tiles and fan myself with my Oyster card before I could take one dainty little step further.

“It’s hot!” I said, handing my jacket to the stoically beautiful young woman who was manning the cloakroom at the chi-chi venue where the gathering took place.

“Hot, isn’t it?” I said to a group of young people who were by the entrance, dispensing name badges and glasses of elderflower-infused water. They nodded politely at me, then disappeared in a waft of lemony scent, floating off through the growing crowd in their eco runners, which were probably made from coconut matting and kumquat seeds.

Beached and panting, clutching my exotic water, I thought that despite my best efforts to manage this quixotic city, I always remain uncool.

I allowed myself imagine, for a moment, what it might’ve been like to have remained living in this city

Two days later I hurried along Upper Street with my son, who has made London his home. We lashed past trendy shopfronts where featureless mannequins wore vegan-friendly rainwear and past Japanese fusion restaurants where those same vegans could dine on terribly interesting mushrooms. We sped through intense sunshine to the Almeida Theatre, to see a matinee performance, a brilliant, moving adaptation of Chekhov’s Three Sisters. Lobster-pink, I threw myself on the theatre bar when we arrived and quickly drank water from a recyclable beaker in the minutes we had before the play began.

I turned to see an elegant elderly woman raise her walking stick to another elderly woman she had just spotted entering the foyer, afloat in a summery kaftan and strings of greenish beads. They embraced, the two women, and I allowed myself to imagine, for a moment, what it might’ve been like to have remained living in this city, to have stayed and grown old there. (Not that I could’ve afforded to settle in liberal, moneyed Islington, where even the mannequins can face the rain without compromising their principles.)

I lived in London in the early 1990s, in King’s Cross and then in Camberwell, neither area, in those pre-millennium days, known for its desirability.

In King’s Cross we lived in a murky basement with cracked Dickensian-looking windowpanes in the bedroom that somehow managed to keep out the light and let in the cold. Later we lived in a flat in Camberwell, where, one evening, I lay on the floor and a friend knelt down beside me and swung her necklace over my pregnant stomach. According to this time-honoured method, the direction of the swing (clockwise or anti-clockwise, I can’t remember which) meant that I was, she said, most definitely having a girl.

On the day before we went to the matinee in Islington, my son and I ate jerk chicken in Brixton Market, not far from where he now lives in a flat that is accessed by climbing up and up a narrow ironwork stairway. Afterwards we walked through Brockwell Park, past the Lido, past the nesting swans, past walkers yanking the chains of edgy pink-eyed dogs who snarled at the indifferent birds.

We walked to Half Moon Lane. I showed him the cafe where I had waitressed in my late 20s and where, one night as we cashed up, a man tried to hold us up at gunpoint. He didn’t succeed in getting any money, and afterwards the manager poured the staff cups and cups of cheap wine and the night became another story. It’s different around there now; flower shops and head massages and baskets of shiitakes.

I left London 23 years ago when I was pregnant, having suddenly become inexplicably afraid, afraid that something would happen to the baby if I stayed. My urge to go home was strong; it carried my son and me, and later his father, across the sea.

I said goodbye to my son on the Tube back from Islington, he staying on to Brixton while I changed lines at Green Park to go to Heathrow. In the labyrinthine tunnels, I felt myself dissolving into the crowd, carried away from a life that might have been, from a past almost unrecognisable and from a child, now adult, who could find his own way home.