Martin McNamara obituary: A hard worker and a perfectionist

‘He loved to have the craic in his local’ 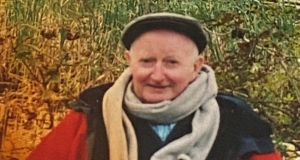 From Gilroe near Gort in Co Galway, Martin McNamara was born on a small farm in March 1937, in a family of six boys and one girl. Like many of his generation he emigrated to England in the early 1950s, at just 15 or 16, says his youngest daughter Julie. He went to Cricklewood in London and worked on the buildings as a labourer, then as a plasterer.

He met Joanne Lawlor from Borris in Co Carlow. They married in 1960 and lived at Morden in south London where their five children – Martin, Anthony, Michael, Joanne and Julie – were born. He worked hard. At his funeral his son Anthony recalled that one his earliest memories was of his father on Saturdays “when he would come in from work and watch the wrestling on the black and white telly, Big Daddy and Giant Haystacks. He would fall asleep after a long week of work and we’d sit there listening to him snoring.”

Martin and Joanne dreamed of returning to Ireland and did so in 1971, first to Dublin and then to Clane in Co Kildare, where they stayed. Martin worked as a builder, employing local men. The children spent “summers in Galway visiting my dad’s family and weekends in Carlow visiting my mother’s family”, says Julie. Meanwhile, their father “built many houses around Kildare. He was known as a perfectionist; his motto was if you’re going to do anything, do it right. He employed many local tradesmen and loved to have the craic in his local.”

He loved to talk about Gort in Galway, where he grew up, and Galway hurling

The first of two disasters happened to Martin in 2001. Joanne died suddenly of a heart attack. Then in 2004 he suffered a major stroke and spent the rest of his life in a nursing home. He remained “good natured and gentle, always ready to laugh”, says Julie, but “he kept himself to himself though”.

He was “happy living in his memories, reminiscing about the days he was a plasterer or going to the Epsom Horse races. He loved to talk about Gort in Galway, where he grew up, and Galway hurling.”

He suffered a second stroke on March 16th last and was taken to Naas General Hospital where he was also treated for a urinary tract infection. More than two weeks later he returned to Craddock House Nursing Home in Naas but within days was unwell and sent back to the hospital where he was diagnosed with Covid-19. He died there on April 14th.