Ross O’Carroll-Kelly: God, Fionnuala has tipped waiters that for a good Martini 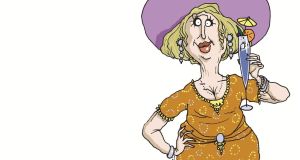 'I’ll get you some money in a minute, whatever you’re called. First, I need to weigh you.' Illustration: Alan Clarke

You know how sometimes you get an image of someone in your head and you know that’s how you’re going to remember them forever? Happened to me on Tuesday morning, when I swung into the old dear’s driveway to see her watering her gorden in defiance of the hosepipe ban.

I went, “Should you really be doing that?”

And she was like, “You mean manual labour? Yes, I’m sorry you had to see me like this, Ross. But my gardener has taken his family to Rosslare for the week – either I’m paying him too much or he’s stealing from me – and Iryna the Cleaner said her duties as a domestic didn’t involve work outdoors.”

“Maybe she didn’t want to do it because it’s against the law. That’s what I meant – there’s a supposed hosepipe ban?”

“People who are happy to pay the fine. It’s only €125. God, I’ve tipped the waiting staff in the Shelbourne Hotel that for a good Martini!”

Well, at least the way she’s turned out has fock-all to do with me

Honor got out of the cor, already laughing. She was like, “Oh my God, Fionnuala, you genuinely don’t give a shit about anyone else,” and she said it like it was a compliment.

The old dear went, “Thank you, darling,” and kissed her on the top of her head.

Honor was there, “Can I have a go, Fionnuala? And can you film me doing it, so I can put it on my Insta story with a caption saying, ‘Hosepipe ban? What hosepipe ban?’ ”

“Of course!” the old dear went, handing her the business end of the hose, then taking her phone from her.

Honor was like, “And make sure you get my left hand in! I’m sticking up my middle finger, look!”

I have to say – speaking as a parent – it’s a lovely thing to see the same qualities in your daughter as you see in your mother and to think, Well, at least the way she’s turned out has fock-all to do with me.

The old dear finished shooting, then went, “Anyway, why don’t you come into the house? Have you brought the twins, Ross?”

I was there, “Yeah, for the twentieth time, they’re actually triplets?”

“Why do I keep thinking they’re twins?”

“Because it’s 11 o’clock in the morning and you’ve probably got half a bottle of Tanqueray inside you.”

I took the boys – effing and blinding – out of their child seats and put them down on the gravel. “What the fock is this shit?” Leo went, not talking about anything specifically – he meant life in general.

The old dear suddenly made this, like, shocked noise?

I was there, “If it’s about the bad language, me and Sorcha have decided to ignore it in the hope that it eventually stops.”

And she went, “I’m not talking about the language. I’m talking about, well, I’m trying to think of a delicate way to say this – look how fat they are!”

The old dear was like, “What has Sorcha been feeding them, Ross?”

I was there, “Sorcha hasn’t been feeding them. She’s gone back to work.

“Work?” the old dear went – like I said she was stripping or something.

I was like, “She got a job – as a Something Something with Linked In. She went to one of her Mount Anville Past Pupil Networking Breakfasts and I’ve ended up having to raise the children, even though I’m trying my best to avoid sounding sexist here.”

The old dear took Johnny by the hand. “Gimme some focking money,” he went – okay, the boys definitely do take after me?

The old dear led him into the gaff, going, “I’ll get you some money in a minute, whatever you’re called. First, I need to weigh you.”

And that’s what ended up happening. Yeah, no, she put him on the bathroom scales, then looked up at me in horror. “Jesus,” she went, “this one is over 40lb!”

It’s like she was in Sheridan’s watching them slice her bresaola.

“This one,” I went, “happens to be called Johnny. How many times have I written their names down for you?”

She was like, “The one that you’re carrying, Ross, looks even heavier.”

Honor laughed. Even though she can hordly afford to – she’s piled on the pounds as well.

“What have you been doing?” the old dear went. “Bringing them to McDonald’s every day?”

I was like, “No, I haven’t been bringing them to McDonald’s every day. I’ve been making sure they get a healthy diet with plenty of variety.”

Leo was like, “Fock you, you stupid cow,” and I’m not going to say he didn’t have a point.

The old dear went, “Ross, are you not concerned about this – about what it could mean for their futures?”

I was there, “Of course I’m concerned. But I was thinking they might end up playing in the forwards. Brian already has the look of a tighthead prop about him.”

“How could you let this happen?”

“Look, I can’t cook, okay? And the thing about kids is they have to be fed every single day.”

“Why didn’t you come to me? You know how much I love to cook!”

She lifted Leo off the scales then.

“Come on,” she went, “I’m going to make you all one of my famous chicken fiesta salads with fire-roasted salsa.”

I was there, “It sounds disgusting.”

The old dear was like, “I’m going to spend the rest of the day making you healthy dinners for the next month, which you can put in the freezer and then defrost them as you need them. Come with me, children: Jimmy and whatever you’re called – Barry, is it?”

She brought the boys down to the kitchen.

Honor turned around to me and went, “Fionnuala is so amazing, isn’t she?”

And I was like, “She can be? As in, there’s definitely good in her, underneath all that silicone and tyre rubber.”

“Did you, em, leave that hose running in the gorden?”

“Then you already are, Honor.”