‘Would you ever whisht up while I catch up on the death notices?’

Rip.ie is the perfect site for a nation obsessed with whether corpses look like themselves 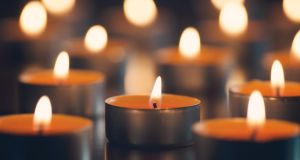 RIP: I see a death notice as proof that a person was loved and valued. Photograph: iStock/Getty

Picture the scene. You wander into the kitchen and ask something mundane, like, “Do we have cornflakes in the press?” Your mother glares at you as though you have just belched at a funeral. “Would you ever whisht up? I’m listening to the death notices,” she says, gesturing towards the radio.

But by that stage it’s too late, and the gentle voice on the wireless is saying, “Ar dheis Dé go raibh siad.” Your mother has missed all the death notices and all because her oafish child had the temerity to interrupt and ask about cereal. All of a sudden she has an epiphany. “Would those be on rip.ie now?”

Since its inception, in 2005, rip.ie has become one of the best-known websites in Ireland. It bills itself as catering to “end of life matters”. It contains a service directory, which lists funeral directors, florists and caterers, among others, by county. There’s an online shop from which you can purchase handwritten sympathy cards. One of the website’s most popular resources is a post containing the lyrics to Christie Hennessy’s Remember Me, a song often performed at funerals.

The site’s main selling point, however, is that it functions as a one-stop shop for death notices. No longer does one have to tune into local radio to hear who has died. Now you can visit rip.ie at any time of day and satisfy your morbid curiosity by trawling through death notices from every nook and cranny of the island. In short, it’s the perfect social network for a nation obsessed with whether corpses look like themselves.

In recent months I have found myself visiting this online repository of death with greater frequency. My cycle of internet procrastination now looks like this: Twitter, Facebook, Instagram, rip.ie. I’ll usually while away 15 minutes flicking through death notices and reading those that catch my eye.

I should clarify that I don’t have an unhealthy obsession with the macabre. I don’t spend my free time thinking about death or even necessarily worrying about it. Instead my visits to rip.ie stem from the fact that I am both quite nosy and extremely sentimental.

When I visit the website I will first go through the death notices for Waterford, my home county, and Dublin, my adopted home. Sometimes I’ll peruse the Featured Death Notices on the homepage, which often feature young people, people who have died in tragic circumstances, or pillars of the community. It’s mercifully rare that I stumble on a familiar name, so I mostly end up reading death notices for perfect strangers.

You can usually tell quite quickly what kind of death notice you’re reading. The language may be purposefully cryptic and sanitised, but we all know what the words allude to and the stories they are hinting at. “Suddenly”. “Peacefully”. “An illness borne with great dignity”. A request for donations to a hospice. A request for donations to Pieta House, the suicide and self-harm charity. Some are heart-warming and tell the story of a life well lived. Others are quietly devastating and can render me speechless. All serve as a reminder that death is all around us and can strike when we least expect it.

So why do I read death notices?

For me they scratch the same itch that obituaries do. Although they may lack the detail of an obituary or eulogy, they paint a rich portrait. “Formerly of CIÉ.” “Dearly missed by her beloved husband.” “Donations in lieu of flowers to Cahir Men’s Shed.” Sometimes a person’s nickname is included in brackets – (Scobie), (Sully) or (Deco). Occasionally a faithful dog will be listed among the survivors and my heart will break in two.

These fragments of information can’t hope to sum up the totality of a person’s life. But they do help humanise the deceased and offer a small but vivid insight into their lives – their family, their friends, their work, what gave them pride, what gave them joy.

The idea of reading death notices every day might strike some of you as mawkish. Why spend time dwelling on the deaths of people you didn’t and can now never know? Life is for living and all that. But I don’t find it depressing. Quite the opposite.

I see a death notice as proof that a person was loved and valued. It’s a reminder that all lives, no matter how humble and ordinary they may seem on the surface, leave behind an important legacy. And what could be more life-affirming than that?

Now whisht up as I catch up on the ones I missed, will you?

Jennifer O’Connell is on leave