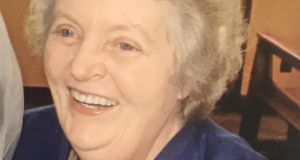 Kay McEvilly: knew every plant, shrub and tree that thrived on the peaty soil in her hotel’s grounds.

Kay McEvilly, owner of the popular Cashel House Hotel near Roundstone in Connemara, died on June 25th at the age of 78.

She was the third of five children born to Frank and Dolly Emerson of Ardbear near Clifden. As a young girl she spent her summer holidays helping her grandmother, who owned a small hotel, the Ivy Hotel, in Clifden. It was here that she honed her skills for the hospitality industry. On leaving school she studied nursing but never finished the course. Love intervened in the shape of Dermot McEvilly, who was working in the Prince of Wales Hotel in Athlone.

Following their marriage Kay and Dermot moved to work in the Ardilaun Hotel in Galway. Their ultimate dream was to own their own hotel. As luck would have it, Cashel House, their dream property, came on the market in 1967. It was also fate as McEvilly’s grandfather Geoffrey Emerson was the architect and builder of Cashel House. The banks were unwilling to lend them the money but both sets of parents helped and the dream became a reality.

McEvilly was always proud of the fact that every penny of the loan was repaid within three years of opening the hotel. They opened their doors in 1968, following extensive refurbishment. In 1969 President Charles de Gaulle stayed for several weeks at Cashel House Hotel. This required considerable preparation, including the commissioning of an extra-long bed to accommodate their very tall guest. (De Gaulle was 196cm tall, or 6ft 5in.)

McEvilly was one of those hoteliers that guests always remember meeting, not because she was a forceful character but for her gentleness and kindness

Kay and Dermot were in the vanguard at marketing Ireland’s growing tourism industry. They concentrated on the continental market following Bloody Sunday in 1972, which saw their British market decimated; it was the first of three recessions to hit their business.

On one such marketing trip to Paris, they met with Barry Maybury of Bord Fáilte (now Fáilte Ireland), who saw that their hotel and similar places, such as Longueville and Ballymaloe Houses, were out of the ordinary. It was Maybury who set up the first meeting of these like-minded owner-manager hoteliers, who founded Ireland’s Blue Book in 1974.

McEvilly was always conscious of the fluctuations of the tourism market and saw niches such as American garden clubs as being a good fit. McEvilly’s love for the extensive gardens at Cashel House was widely known, and she knew every plant, shrub and tree that thrived on the peaty soil. She was thrilled when the British Tree Society visited to catalogue the rare species in the grounds.

McEvilly never tired of gardening, and one of her favourite activities was the sowing of potatoes every St Patrick’s Day using the traditional method of planting in seaweed. Most of the produce served to guests came from her extensive herb and vegetable garden. When her husband died, in 2008, she took on the entire responsibility of running a busy and successful hotel.

McEvilly was one of those hoteliers that guests always remember meeting, not because she was a forceful character but for her gentleness and kindness. Her ethos with guests was that everybody was entitled to be treated the same; the many celebrities she hosted over the years privacy knew their every move would not be splashed across the newspapers.

In recent years her daughter, Lucy, and son Frank joined McEvilly in running the hotel. She remained involved right up to her death. She blossomed when meeting guests, particularly the returning ones, all of whom she remembered. Her staff were devoted to her, some having worked there for most of their lives, such as Ray Doorley, who has been at Cashel for 37 years. It was perhaps a fitting farewell that McEvilly had celebrated the 50th anniversary of the hotel a month before she died and when her gardens were in full bloom of a hot summer’s day.

McEvilly is survived by her three children, Lucy, Frank and Brian; Brian’s wife, Ruth; Frank’s partner, Eva; her cherished grandchildren, Sarah and Claire; and her siblings, Geoff and Tony.