Lives Lost to Covid-19: The Green, Green Grass of Home was his favourite song to sing 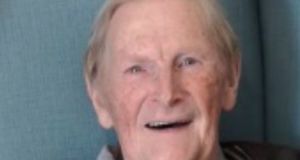 Donal Hurson: Loved the company of his nieces, nephews, grandnieces and grandnephews, his friends and neighbours

Donal Hurson spent most of his adult life in Dublin selling shoes on Capel Street, but Co Monaghan was where his heart stayed, and the county finally called him home for two years before he died from Covid-19 in May.

Born on January 12th, 1931 to Paddy and Roseanne Hurson, Donal was the second-youngest sibling to Ann, Peggy, Maureen, Paudge, Mickey, Eddie, Jim and Jack. The children grew up in Rooskey in Threemilehouse, Co Monaghan, and the family remained central to Donal throughout his life; a picture of all the Hursons took pride of place in his room at Drumbear Lodge Nursing Home until the day he died.

At the age of 14, Donal got an apprenticeship in a drapery shop in the town, where he worked for three years. He often told the story about excitedly cycling home to tell his parents about the 10 shillings he got in his first wage packet, only to find when he got to the house that the money had fallen out of his pocket.

In the summer of 1948, his mother saw an advertisement in the Irish Press for a job as shop assistant for a shoe shop in Dublin, and applied on Donal’s behalf. He was called to an interview and offered the job. His family recall how Donal wasn’t overly pleased, as he had great plans made with his friends for spending the summer together. But he took up the offer, staying with his sister Ann in Dublin.

Before long he became manager of Connolly’s Shoes on Capel Street, where he worked for almost four decades, until the Connolly group closed the shop in the late 1980s. Donal took over the shop himself and renamed it Global Shoes, where he traded until his retirement in the mid-1990s. Over the course of his career, he also became interested in property investments with some friends, and was a very successful businessman.

Above all, Donal enjoyed the craic and a few drinks with his many friends, and was fond of a song after a few pints. He loved the music of Tom Jones (The Green Green Grass of Home was one of his favourite songs to sing) and Johnny Cash, and watching boxing and old John Wayne movies on television. He travelled back to Threemilehouse every weekend to see his family.

After a spell in hospital in 2018, Donal decided to move back to his native Monaghan, and chose Drumbear Lodge Nursing Home as his residence. He settled quickly and, as it was a beautiful summer, he spent most of his time out in the garden, having a sneaky cigarette while chatting to other residents. He was popular with the care assistants, who he supplied with chocolates.

He loved getting out for a drive around Threemilehouse, and having an ice cream on the way back. Visitors were always greeted with a smile from Donal, and he loved the company of his nieces, nephews, grandnieces and grandnephews, his friends and neighbours.

When Covid-19 visiting restrictions were introduced in March, Donal continued to chat to his family and friends on the phone or on FaceTime.

On April 23rd he tested positive for the virus. He was not showing any symptoms and the family were hopeful he would pull through, but he became ill and died on May 1st.

On the day of his funeral, his former neighbours in Threemilehouse lined the roads to the cemetery where Donal was buried alongside his parents, while his favourite song played:

“Yes they’ll all come to see me
In the shade of that old oak tree
As they lay me ’neath the green, green grass of home.”