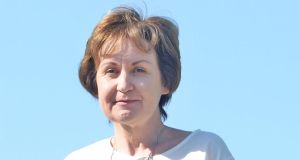 Diane Payne was a passionate scholar and teacher who took the empirical orientation of the social sciences seriously. Photograph: Alan Betson

One of the most innovative of a promising generation of internationally trained Irish social science researchers, Diane Payne, has died aged 52 after a battle with cancer.

Payne, who used her considerable intelligence to teach and understand issues of importance to society, was associate professor at University College Dublin’s school of sociology and director of the Dynamics Lab for Computational Social Science at UCD’s Geary Institute.

She was a passionate scholar and teacher who took the empirical orientation of the social sciences seriously. She lived up to the promise offered by this academic undertaking by mainly pursuing highly innovative, data-driven analytical sociology.

Her commitment to an empirically grounded sociology, including the exploration of newly available data and focusing on related training and expertise, was not always fully appreciated by all colleagues and fellow sociologists. That scepticism was particularly unjustified given her vision and confidence.

She convincingly maintained that new ways of doing empirical research have a legitimate place in the social sciences, perhaps even more so in the time of big data and big lies. She was active, passionate and deeply committed to shaping the research agendas of UCD’s school of sociology and the Dynamics Lab at the Geary Institute.

Payne established a programme for master and doctoral students – the greatest growth area in this particular academic field. As head of school, she was also responsible for the expansion of the school of sociology as it emerged from the financial crisis that had so badly affected higher education. Under her leadership the school began to reform and blossom again. Unfortunately, a bout of ill health prevented her from being reappointed as head of school.

Payne’s commitment and energising agenda-setting were driven by a belief in radical social and political reform at home and abroad. She saw sociology and the social sciences as serving the wider public, especially in terms of improving informed decision-making processes.

Diane grew up in Dalkey and attended Loreto Abbey. Her father Mick was an architect and her mother Marie a mother and homemaker. She grew up the only female child with three brothers. When she finished secondary school she considered studying science or becoming an actor but turned her attention instead to sociology and the study of human groups and behaviour. She received her PhD training at the University of Groningen, in the Netherlands, supported by an EU Jean Marie Fellowship between 1992 and 1997. This was followed by post-doctoral research at Cambridge. After the UK she worked one year at Trinity College before being offered a permanent position at UCD.

Diane was a passionate advocate for equal rights to education and services for all children and had joined the committee of the Wicklow-based Triple A Alliance charity which supports parents of children with autism. Last summer she was successful in securing appropriate secondary-level education for her own son, Christopher, and this struggle was reported in the media.

Payne is survived by her husband Dimitris and their two children Sofia and Christopher, three brothers, Colin, Brendan and Andrew, and her mother.