Hilary Fannin: I graduated from Trinity College the other day. It’s never too late 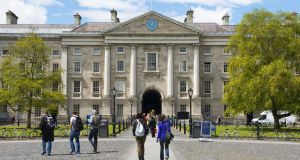 In the Public Theatre, I looked around at the parents of the young students I was graduating with, and wondered how many, if any, of them still felt inadequate. Photograph: istock

Well, I graduated from Trinity College Dublin the other day. The ceremony was held in the Public Theatre on the university’s main quadrangle.

The building, where we waited in neat alphabetical rows for our certificates to be bestowed upon us, is, I read, an iconic part of Trinity’s cultural heritage.

A single-vaulted chamber with an apse, the theatre contains a recently restored organ. The main casing of the instrument, we were told as we waited for the man with the mace to get the party started, dates all the way back to 1684. Bloody hell, 1684, eh! Goodness me, I mused, sitting there among an awful lot of twentysomethings, that makes the organ marginally longer in the tooth than I am.

Apparently, according to the gracious introductory speaker who addressed us from behind a podium, it was during the organ’s 15-month restoration programme – and I’m paraphrasing somewhat wildly here – that someone had the bright idea of stripping away the layers of brown paint covering the original facade pipes, thereby revealing the sumptuous paintwork underneath.

Now I’m no connoisseur of 17th-century organ construction or its restoration, but I mention the recently uncovered pipes because I can’t resist the clunking great metaphor they provide for how it felt to be sitting there, under the decorative apse, having assumed for a large chunk of my younger life that third-level education was for other people, not for me.

I somehow believed that this historic seat of learning was not for those of us who – if you can bear me beating the analogy to death – had been covered in the brown paint of our education system’s disregard.

Look, I know buckets of people of my vintage with successful lives and careers who couldn’t wait to get shot of school and never wanted to go to university, people who would rather eat the proverbial cat than return to the classroom.

Equally, sometimes when I tell people about my own journey, which includes finally going to college in my mid-50s, I hear stories of loss, often from women, that feel deadeningly familiar to me.

I’ve written before about my own education story: lack of money, lack of parental vision, lack of talent, lack of luck, a blanket lack of understanding of core subjects such as maths and Irish.

I still haven’t forgotten the pervasive, sickening fear, which began when I was about five, of waking up on a winter Monday morning knowing that I was going to have to get up, drag myself into my woolly tights and go to school to be humiliated and shouted at because I didn’t understand subtraction or division or what Pól agus Idé were getting up to on their endless shagging laethanta saoire.

Irish and maths left me snow-blind. For years of my childhood I was lost in a blizzard of dashes and crosses across the textbooks that felt as random and startling as a murder of crows alighting on my bedsheets. And that was where it began, the feeling that I wasn’t good enough, that I was never going to succeed.

It still saddens me when I meet men and women who, like me, were told as children that they were weak, stupid, an amadán, a dolt; people who, having imbibed that violent creed, tell me now that they’d never have the confidence to return to education, as much as they might like to.

In the Public Theatre, I looked around at the parents of the young students I was graduating with, and wondered how many, if any, of them still felt inadequate.

How many had sacrificed their own dreams for mortarboard-wearing children now imbued with their parents’ ambition and sense of loss? Maybe less than I think; maybe no one in that beautiful theatre, graduate or guest, was recalling the ordinary assumption of failure.

I sat there that morning in my gown, under the portraits of stern precursors, under the decorative facade of the joyous organ, among a roomful of fellow students, many of them younger, some my age, and I didn’t feel elated or overwhelmed, just glad.

Glad and ordinary, ordinary and glad that I’d had that solid time to learn and think and read; glad to have been held by history and by some abstract, powerful, ongoing belief in potential.

Earlier, in the loo next to the Buttery, putting on my lippy in front of a long mirror crowded with faces, some young, some not, I realised that if I’d learned one thing from my time at college, it’s that it’s never ever too late to silence the childhood voices of discouragement.