Mark Zuckerberg plans to play Cupid and help his users find love. It just might work 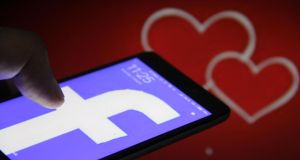 Secret Crush: if your crush adds you to their list, Facebook will reveal you to each other. Photograph: Nasir Kachroo/NurPhoto via Getty

Harking back to its humble beginnings as a tool for ranking strangers’ attractiveness, Facebook has announced a new feature called Secret Crush, wherein users select the friends for whom they carry a torch.

If your crush adds you to their list – and with up to nine picks allowed, your odds aren’t bad – Facebook will reveal you to each other and love will assuredly bloom. But if the feeling is not reciprocated, they need never know your identity – just that one of their friends has added them as a “secret crush”.

It is, for sure, a more welcome notification than “It is [former colleague]’s birthday today. Send him good thoughts!” or “You have seven unopened saves this week”. But for now the feature – announced at the platform’s annual F8 conference on Tuesday – is limited to users of Facebook Dating, which is yet to be rolled out globally. (As of today, it is available in 18 countries, mostly in Asia and South America; Ireland, the UK and the US are not among them.)

According to reports, Facebook Dating works to connect users with people in their outer networks. Users create a dating profile that is separate from but integrated with their main Facebook presence, visible only to nonfriends who have also opted in to Dating. There is no swiping – instead, potential matches are suggested on the basis of dating preferences and shared interests and events. Otherwise, it’s not dissimilar from dating apps such as Tinder, Hinge and Bumble.

Where Facebook outstrips them all is in number of users – Mark Zuckerberg’s company has 2.4 billion active monthly, as of March 30th; by comparison, Tinder has about 3.8 million – and the volume of data it has on them to inform a match: the two metrics by which a dating platform takes off, or fails.

By the sheer size of its network, Facebook has the potential to shake up online dating – and Secret Crush shows how. Dating apps introduce you to strangers, but Secret Crush could connect you with someone you already know you fancy. At the moment your best bet is to download Tinder and cross your fingers that they cross your screen. Or you could always, you know, try telling them in person. – Guardian