Feargal Quinn obituary: Businessman and politician with the personal touch 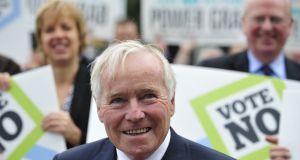 Senator Feargal Quinn at the launch of the No campaign in the Seanad referendum in Dublin, 2013. Photograph: Aidan Crawley

It might seem paradoxical to commence an obituary of Feargal Quinn, who has died aged 82, by reference firstly to his remarkable career as a legislator in Seanad Éireann rather than to his stratospherically successful business career, but it is something of a tribute to the sheer breadth of his interests that in the week following his death, the Government is finally introducing an organ donation Bill substantially proposing to put into law something he as a senator had first proposed in a Private Members’ Bill 11 years ago.

Quinn was from a business family; his parents, Eamonn and Mary (nee Donnelly), ran the Red Island holiday camp in Skerries, Co Dublin, in the 1940s and 1950s. Feargal went out on his own early with a typically innovative business idea, opening Ireland’s first supermarket in High Street, Dundalk, at the beginning of the 1960s, shortly after graduating from University College Dublin with a BComm degree, which followed his school years at Newbridge College.

From Dundalk it was all the way up for him to the moment in 2006 when he and his family sold their Superquinn company for €420 million. Along the way he became arguably the most innovative retailer of the last half-century in this country, with a truly global reputation, symbolised by his membership of the board of the US-based Food Marketing Institute in 1989-2011 and his election in 2006 as president of Eurocommerce, the premier body for retailing in the EU.

He remained, however, very much with his two feet on the ground, a central characteristic, it is firmly believed by those who worked most closely with him, of his success.

John McLennan, Superquinn’s former head of grocery, recalled vividly this week his former boss’s very personal way of working with both his ordinary customers in his many stores and his colleagues from the shop floor to the boardroom:

“His passion was people. He wanted to know who they were, who their kids were, but it wasn’t in a prying way … He introduced himself to every new staff member, wanting to know who their parents were, etc … I was once at a management meeting with him and asked him how he remembered everyone’s names. He told me he had done a names appreciation course, recalling people’s names by focusing on some physical aspect of their appearance.”

Even tiny details mattered. “I would be on the phone to people like Unilever or Procter & Gamble, and Feargal would come into the office with a Post-it notice that ‘Mrs So-and-So is wondering when her [preferred soap powder] would be back in stock’!”

Quinn’s other innovations included the introduction of Irish to complement English in his stores’ notices (he went so far as to complete an intensive dian-chúrsa with Gael-Linn, involving five nights a week and three hours at weekends), and starting customer panels made up of ordinary shoppers – not just Superquinn customers but those of competitors’ businesses also, recalls his long-time personal assistant Anne O’Broin, who spoke this week of his deep commitment to charity.

“For 35 years he organised the Christmas dinners for the homeless in the Mansion House, and now in the RDS. On December 1st every year, he would write to all his food suppliers, who gave their products freely. I remember the parcels coming in filling up my office, and his. When Mother Teresa received the Freedom of Dublin City in 1993, Feargal was invited to do the catering. All the serving was done by Superquinn staff … everyone volunteered, as they did for the Christmas dinners. We had to run a lottery every year to select the servers” as the volunteering was always oversubscribed.

His career in the Seanad was unique. Quinn, from his election to the Seanad in 1992 until his retirement, authored the greatest number (17) of Private Members’ Bills in the history of the institution. There were numerous occasions when proposals he made, while not becoming law, significantly influenced government policy. On two occasions, however, his Bills effectively became law after being adopted or supported by the government of the day.

His Irish Nationality and Citizenship Bill 2003, banning the sale of Irish passports in return for citizenship, was adopted by Michael McDowell when he was minister for justice in 2004, with amendments, and enacted; and his Construction Contracts Bill 2010, which sought to protect building contractors from the financial collapse of companies with which they were engaged on projects, eventually became law in 2016. In a comment this week to The Irish Times, Tom Parlon of the Construction Industry Federation, paying tribute to Quinn’s work, said it had “substantially changed the culture of contracts”, reducing the resolution of conflicts from years to weeks, and that it represented “global best practice”.

Quinn famously was also the first chairperson of An Post, in 1979, a position he occupied until 1989; he was approached to chair the Leaving Certificate Applied Advisory Committee in 1993, and did so, remarking shrewdly that “there is more than one type of intelligence”; he published three books, including his renowned Crowning the Customer, which has been translated in to 14 languages; and in his final years made the memorable RTÉ television series Retail Therapy.

Quinn would probably have admitted he was no saint. He left some of the really tough negotiating – as with the trade unions at Superquinn, for example, and the company’s famously brutally tough-talking with suppliers – to his long-serving chairman, Vincent O’Donoghue. He was socially conservative, working against such liberal reforms as the Civil Partnership Act in the Seanad. Senator David Norris remarked this week that Quinn had “associated himself with some exceptionally mean-spirited amendments” on the issue, although he added that Quinn was “always gentlemanly”, that “we were good friends” and that they often worked together, particularly on the Construction Contracts Bill.

Feargal Quinn is survived by his widow, Denise (nee Prendergast); his daughters, Gilliane and Zoe; his sons, Eamonn, Stephen and Donal; and by his only sibling, sister Eilagh.