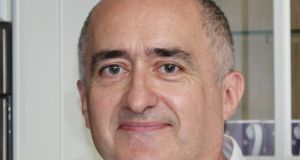 David O’Keeffe: his engaging personality and ability to manage large teams in often stressful, unpredictable environments saw him rise through the BBC ranks

David O’Keeffe, the Dublin-born manager of the Irish Cultural Centre in London who had a highly successful television career in Britain, has died suddenly just weeks before his 60th birthday.

A graduate in communications from Dublin City University in 1985, O’Keeffe worked his way rapidly up through the BBC to become the series editor of Kilroy. Presented by the former British Labour Party MP Robert Kilroy Silk, it was the only live daytime chat show on BBC One television during the late 1980s and early 1990s.

With his engaging personality and ability to manage large teams in often stressful, unpredictable environments, O’Keeffe then moved to ITV to take up the role as series editor of the David Frost show. Working with the world-famous interviewer was an exciting development for O’Keeffe as musicians, politicians, artists and writers were always keen to be interviewed by Frost. He embraced the contact with celebrities with his characteristic blend of wit and discretion.

David O’Keeffe grew up in Marino, the youngest of Harry and Molly O’Keeffe’s four sons. All four boys attended St Joseph’s Christian Brothers school in Fairview. He worked for a short time for one of the Irish banks, and in the civil service, before deciding to embark on a career in communications.

A gregarious man with excellent networking skills, O’Keeffe was always interested in politics and equality issues. He came out as a gay man when he was 26 and was a passionate advocate for LGBT communities as well for women and oppressed people around the world. He was particularly active in the 1990s in support of gay rights both in Ireland and later in the UK.

O’Keeffe was also a committed member of the Richmond and Kingston Palestinian support group. He was particularly passionate about medical aid for Palestinians, spending time in Palestine and hosting large fundraising parties in the garden of his home in Twickenham.

Music was another passion in his life. He played the classical guitar from a young age, and in his late teens he won first place in the Feis Ceoil playing Cavatina, by John Williams. In adulthood, he developed his performance skills further, adopting the stage name Papa DOK and crooning Johnny Cash or Leonard Cohen at various private gatherings. Latterly, he gave much of his time to Youth Music, a charity that helped young people develop personally and socially through the medium of music.

His friends remember him most as a sensitive, warm and caring man with a great sense of fun. He wore his success lightly. Following his career in television, he trained and practised as an acupuncturist while also running media training for business executives through his company, Dreamcatcher Media. O’Keeffe also took up running in his 50s, entering 10km run and half-marathons for the various charities he supported.

He took up the position as General Manager of the Irish Cultural Centre in Hammersmith in June, 2018. His vision was to open up the centre to emerging Irish artists, musicians, filmmakers and writers while attracting audiences from the younger generation of successful Irish people living in and passing through London. He also hoped the centre could become a stop-off point for Irish business people passing through London as it is situated across the road from Hammersmith Tube station where the Piccadilly tube line goes to Heathrow airport.

During his short time as general manager at the Irish Cultural Centre, O’Keeffe oversaw the building of a new chic boutique-hotel style foyer and reception/networking space. A new mezzanine gallery and professional-standard dance studio were also completed during his time there.

Other projects he was in the midst of developing include a LGBT themed event to celebrate the gay community’s contribution to Irish and British culture, a comedy slot, and a series of art exhibitions celebrating emerging Irish talent. Although bereft following his sudden death, the Irish Cultural Centre is committed to seeing these projects through .

David O’Keeffe is survived by his brothers, Donal, Colm and Paul, and a wide circle of friends.

Jim Gavin: the Dublin footballer manager and pilot on living the high life
9