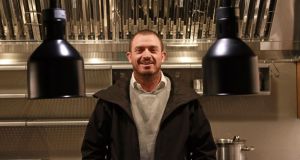 Liath: Damien Grey, chef-proprietor of the Michelin-starred Dublin restaurant, plans to cook 30 two-course meals a day on his own, for takeaway. Photograph: Nick Bradshaw

Liath, the Michelin-starred restaurant in Blackrock, Co Dublin, which has been closed because of the coronavirus crisis, has launched a takeaway menu. It went live today at 10am, and reserving one of the €19-per-person two-course meals to go proved to be just as difficult as securing a table reservation at the 22-seat establishment.

In a matter of minutes all of the Family Meal to Go reservations that were released on the restaurant’s website for collection next Thursday, Friday and Saturday sold out. In the coming weeks Liath’s chef-proprietor, Damien Grey, aims to offer the service Tuesday to Saturday, with production capped at 30 meals a night.

“I am not interested in feeding the masses, I just want to do something that will help pay the bills. It’s about survival, goddamned survival,” Grey says.

The chef, who has temporarily laid off his staff, will be cooking the meals on his own, using ingredients from just three suppliers. He will also be dropping them off to customers at a pre-arranged point, away from the restaurant, with strict no-contact protocols in place.

Collection slots at 15-minute intervals between 5.30pm and 8pm were offered for the first week’s menu, and payment was made in advance on the restaurant’s website. There is also a link on the website inviting customers to donate an optional €10 per person, which will go to the staff who have been laid off, as well as supporting HSE front-line workers.

Grey, who says the idea for the takeaway family meal was conceived in the past 24 hours, plans to post instructions on how to reheat and finish preparing each week’s meal on the restaurant’s Instagram account. “At Liath you have fun, and I want this to be fun too. I’ll give you the stuff 90 per cent preprepared, and you have to finish it at home.”

He says he took inspiration for the initiative from Michelin-starred restaurants in the United States. “When you see three-stars like Alinea knocking out beef Wellingtons... they have morphed into something else, for now.”

A new Liath takeaway menu will be posted next week; Grey advises checking the restaurant’s website for details of when this will go on sale.

Property market: Is now the time to buy?
5

Coronavirus: Can we get a caravan park fee refund because of closure?
9