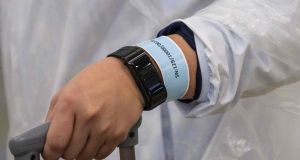 A passenger arriving into Hong Kong international airport wears a quarantine tracking wrist band as a measure to stop the spread of coronavirus. Photograph: Anthony Wallace/AFP via Getty

We already have two silver bullets to control the spread of coronavirus. Those weapons are soap and our own forbearance.

It’s not a lot. But with more than half a million cases of infection reported worldwide, and in the absence of anything more muscular on the immediate horizon, we’re going with it. Hands are being washed until knuckles are stripped bare. Front doors are staying shut, bar emergency runs for toilet roll, burger buns or a jolt of fresh air.

Throughout the crisis, Ireland’s approach has been decisive and measured. One day, though, decisive and measured might not be enough. We are only at the beginning of the curve. Mathematicians can debate whether its course is exponential or quadratic, but no one is arguing about the direction in which it is going.

Fear has turned us into a self-policing state, a nation of rule-followers and quarantine-shamers

So what happens in the next stage, the medium term, when the virus is still raging, but fatigue and distress have set in? What other sacrifices might we be asked to make?

The steps we have already taken have been extraordinary and unfathomable. The norms on which our interactions depend – social mores, delicately negotiated over centuries – have been upended overnight. Fear has turned us into a self-policing state, a nation of rule-followers and quarantine-shamers. We step into traffic to avoid passing too close to one another. We tut at hapless space invaders in supermarkets. For some, the climate of self-correction has provided an irresistible excuse to take their frustrations out on others – like the woman who messaged me on social media describing children as like “germ-ridden animals”, their parents as “shameless single mothers”.

Mostly, though, this revolution has unfolded with astonishing ease and solidarity. Things we once thought were unaffordable, unconscionable or even unconstitutional are materialising into being overnight. Trollies disappearing from hospital corridors. The number of intensive care unit beds doubling. Workforces becoming remote. Fifty thousand people volunteering to the health service. Rents frozen. Airbnb apartments flooding rental sites.

In these very early days, before our new temporary mortuaries fill with people we love, you could almost forget the rest of it. The economy shuddering to a stop. Hospital staff pleading on social media with businesses to donate personal protective equipment. Draconian new measures allowing the Minister for Health to detain people indefinitely or quarantine entire areas, passing through the Dáil on Thursday with virtually no resistance.

Resistance would have been crass and futile. The video footage from Italy of vulnerable, naked backs of patients lying leaden on hospital trolleys, fighting for every breath, was deterrent enough for the most stout defender of civil rights. The Irish Council for Civil Liberties said the measures were “necessary to protect our rights to life and health”. Terror has made the most bullish of us acquiescent.

If the steps we’ve already taken prove not to be enough, we may be asked to acquiesce further. There is another silver bullet we could use, one deployed early on and with remarkable efficacy in China, South Korea, Taiwan and Singapore. It’s the track-and-trace strategy, using citizens’ personal data.

Murmurings are already beginning here from academic groups, tech companies and some European governments that elements of this technology could be used elsewhere. Up to 60 per cent of transmissions happen before someone is aware they are infected. Just think, it’s suggested, how much easier contact tracing would be if you didn’t have to rely on flawed human memories.

We need to tread carefully. Temporary measures have a way of becoming permanent. Rights ceded are not easily recovered

In South Korea, when someone is diagnosed, potential contacts get a text alert allowing them to click through for more details about their movements. China’s Alipay Health Code, a subsidiary of Alibaba, uses a traffic light system to instruct people when they can go out or have to stay in. No explanation required or given: just a green, yellow or red code. The system also reportedly sends information to the police. In Hong Kong, foreigners arriving into the country are issued with tracking bracelets. Israel is mobilising the country’s domestic security agency to track people potentially infected with the virus

All over the world, another red line is being washed away. Covid-19 is helping to normalise to mass government surveillance of citizens.

Here, the European Commission has moved to permit the use of aggregated phone data to fight Covid-19, as a temporary measure, with the promise that the data will be deleted once the crisis passes. Google and Facebook are both looking at how anonymised location data could be used to help stop the spread.

The pandemic will pass, but the measures we take now might not

Right now, in our state of heightened fear, it might feel reassuring to know that this technology is already in our pockets. There may even be genuinely non-invasive ways it could be used – anonymised data used to identify clusters, say. But we need to tread carefully. Temporary measures have a way of becoming permanent. Rights ceded are not easily recovered.

Now, precisely when we are panicked, is the time when we should decide where our next red line is. If the European Union decides that tracking the movements of individuals with coronavirus would be beneficial – is that a red line? Or if the data is shared with law enforcement – is that one?

As technology advances, it never becomes less invasive. It never demands less of us. Even now, our privacy is not some pesky impediment to the greater good. It’s not some trip to Cheltenham. The pandemic will pass, but the measures we take now might not.

The writer Yuval Noah Harari posited this scenario recently: “If corporations and governments start harvesting our biometric data en masse they can . . . not just predict our feelings but also manipulate our feelings and sell us anything they want – be it a product or a politician.” We are still the best silver bullet in the fight against Covid-19. Let’s keep it that way.

1 Covid-19: Museums, cinemas, hairdressers expected to reopen next week
2 Bloomberg ranks New Zealand top in fight against Covid-19 - but how did Ireland fare?
3 Coronavirus: 226 new cases and 6 further deaths reported in the State
4 How to gift your child a house deposit . . . tax free
5 The beginning of the end: 10 things to know about Covid-19 vaccines
Real news has value SUBSCRIBE