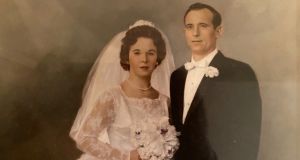 Bridie Connaughton and husband Paddy on their wedding day

Bridie Connaughton was a woman of great love and passion, with a strong work ethic and sense of decency, as well as a sense of fun and mischief. “She was quite fiery and very passionate – your typical redhead I suppose,” Paddy Connaughton says of his mother.

In his eulogy at her funeral, Paddy told a story from his childhood in Oran, Co Roscommon which sums up her nature. A pig dealer came to the farm where the family reared and sold bonhams and pigs and loaded the Connaughtons’ pigs into his lorry without first agreeing a price with Bridie.

When challenged by Bridie, he told her he would agree the price with the man of the house when he returned. But Bridie was “a capable dealer” and “well able to handle him,” Paddy says. “He was told in no uncertain terms to remove our pigs, by now mixed up with the rest of the pigs in the lorry, and put them back in our piggery. The wise man that he was saw the benefits of agreeing to her exorbitant price!”

Bridie Connaughton was born in September 1937 to Edward and Kate Moran in Shraheens, Kilmovee, Co Mayo, the second eldest of eight children. After school, she worked in Mrs Costello’s shop and post office in Kilmovee, as a barmaid in Charlie O’Connor’s pub in Ballaghaderreen, and in a pub in Dublin before moving to London in 1955 to work in the mail department of a large factory.

Love of her life

There she became best friends with Kilkenny woman Mary Moore, who persuaded her to join her in Chicago in 1957. It was in the windy city that she met “the love of her life” Paddy Connaughton, her son – also Paddy Connaughton – says. “Mammy and Daddy immediately struck it off and in 1962 Paddy got engaged to this pocket-sized flame haired beauty.”

The pair married in Chicago in 1963 and had four children, Michael, Eamon, Paddy and Tommy. They moved to Oran in Co Roscommon in 1970, a move Bridie found difficult after spending so many years at the frenetic pace of city life.

Her son Paddy says she “reared us with a mixture of fierce love and discipline”.

“ Mammy placed great store in education and wanted to ensure that her children could avail of the educational opportunities that were denied her in 1940s Ireland.

“Mammy was a woman of great love and passion. She had a great sense of fun and mischief. She loved nothing better than to hear a funny story or to see laughter and joy around us in our house. Family defined her,” he says.

Bridie and Paddy were inseparable. “She was the yin to Daddy’s yang and together they made a wonderful couple,” Paddy says.

She had looked forward to his retirement when they could be together and travel, but their time was cut short. In 1998, when Bridie was just 61-years-old, her husband Paddy died of emphysema. In the same month, Paddy’s mother and brother, both of whom Bridie was very close to, also died. Their deaths “knocked the bottom out of her world and shook her core,” Paddy says.

Her sons and grandchildren kept her going through this time – “she adored them, they were very much part of her life and they helped her cope.”

Bridie suffered from dementia in her later years and moved to Sonas nursing home in Cloverhill, Co Roscommon, two years ago.

She died on June 21st after contracting Covid-19.