Ben Caraher: leading strategist and policy formulator with the SDLP

An Appreciation: He was part of the team who wrote the SDLP constitution and was one of a small group of people around John Hume who helped write ‘Towards a New Ireland’ 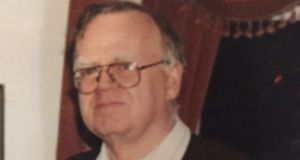 Ben Caraher: spent a long and happy retirement in Crossmaglen, a period which coincided with a particularly golden era for his beloved Crossmaglen Rangers GAC, in whose success he revelled.

John Bernard (Ben) Caraher, who died on November 21st, 2018, was a leading strategist and policy formulator for the SDLP.

Born in Crossmaglen, Co Armagh, on January 1st, 1938, he was educated at St Patrick’s College Armagh and he won a county scholarship to Queen’s University Belfast where he majored in English and history.

At Queen’s he was a member of the New Ireland Society, a student body which brought fresh thinking to the issues and challenges facing democratic Irish nationalism in the North in the 1960s.

After graduation he taught initially in Downpatrick and later, for most of his career, was a teacher in St Mary’s Christian Brothers Grammar School until his retirement in 1996.

An erudite political theorist, widely read in world history, literature and economics, he became a member of the National Democratic Party and, after that party’s demise, an early member of the SDLP and was elected as its first vice-chair under Eddie McGrady. He was totally committed to social democracy and democratic Irish nationalism. Gentle, selfless and self-effacing, he was resolutely opposed to the use of violence to achieve political aims.

A brilliant policy drafter, he was part of the team which wrote the SDLP constitution and was one of a small group of people around John Hume who helped write the ground-breaking 1972 policy document, Towards a New Ireland, which set the course of SDLP policy for decades to come. Many of the ideas in that document influenced the 1973 Sunningdale Agreement and the formation of the subsequent ill-fated 1974 power-sharing Executive. Sunningdale was the best hope to have stopped the descent into the abyss for the next 20 years and the destruction of thousands of lives.

For decades he was an influential figure within the SDLP, and served as vice-chair on several occasions, with responsibility for both policy and organisation. He was also an electoral candidate for the SDLP in South Belfast. Unlike some in the SDLP, he was relentless in his focus on the importance of good branch organisation and canvassing: he walked the walk as well as talking the talk.

Ben, who was unmarried, was a loving brother and uncle to his sisters Maureen, Rita, Patricia and Una and their families.

Paul Flynn: Three delicious dishes you can bank on this weekend
9