Author of The Right Stuff and eccentric doyen of ‘new journalism’

Tom Wolfe obituary: Despite success his writing was denigrated by contemporaries 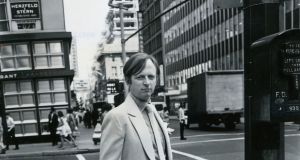 Tom Wolfe, an innovative journalist and novelist whose Technicolor, wildly punctuated prose brought to life the worlds of California surfers, car customisers, astronauts and Manhattan’s moneyed status-seekers in works like The Kandy-Kolored Tangerine-Flake Streamline Baby, The Right Stuff and Bonfire of the Vanities, died on Monday in a New York City hospital. He was 88.

His death was confirmed by his agent, Lynn Nesbit, who said Wolfe had been hospitalised with an infection. He had lived in New York since joining he New York Herald Tribune as a reporter in 1962.

In his use of novelistic techniques in his non-fiction, Wolfe, beginning in the 1960s, helped create the enormously influential hybrid known as New Journalism.

But as an unabashed contrarian, he was almost as well known for his attire as his satire. He was instantly recognisable as he strolled down Madison Avenue – a tall, slender, blue-eyed, still-boyish-looking man in his spotless three-piece vanilla bespoke suit, pin-striped silk shirt with a starched white high collar, bright handkerchief peeking from his breast pocket, watch on a fob, faux spats and white shoes. Once asked to describe his get-up, Wolfe replied brightly, “Neo-pretentious.”

It was a typically wry response from a writer who found delight in lacerating the pretentiousness of others. He had a pitiless eye and a penchant for spotting trends and then giving them names, some of which – like “Radical Chic” and “the Me Decade” – became American idioms.

His talent as a writer and caricaturist was evident from the start in his verbal pyrotechnics and perfect mimicry of speech patterns, his meticulous reporting and his creative use of pop language and explosive punctuation.

From 1965 to 1981, Wolfe produced nine non-fiction books. The Electric Kool-Aid Acid Test, an account of his reportorial travels in California with Ken Kesey and his Merry Pranksters as they spread the gospel of LSD, remains a classic chronicle of the counterculture, “still the best account – fictional or non, in print or on film – of the genesis of the ’60s hipster subculture,” media critic Jack Shafer wrote in the Columbia Journalism Review on the book’s 40th anniversary.

Even more impressive, to many critics, was The Right Stuff, his exhaustively reported narrative about the first US astronauts and the Mercury space programme. The book, adapted into a film in 1983 with a cast that included Sam Shepard, Dennis Quaid and Ed Harris, made test pilot Chuck Yeager a cultural hero and added yet another phrase to the English language. It won the National Book Award.

At the same time, Wolfe continued to turn out a stream of essays and magazine pieces for New York, Harper’s and Esquire. His theory of literature, which he preached in print and in person and to anyone who would listen, was that journalism and non-fiction had “wiped out the novel as American literature’s main event”.

After The Right Stuff, published in 1979, he confronted what he called “the question that rebuked every writer who had made a point of experimenting with non-fiction over the preceding 10 or 15 years: Are you merely ducking the big challenge – The Novel?”

The answer came with The Bonfire of the Vanities. Published initially as a serial in Rolling Stone magazine and in book form in 1987 after extensive revisions, it offered a sweeping, bitingly satirical picture of money, power, greed and vanity in New York during the shameless excesses of the 1980s.

“Extraordinarily good writing forces one to contemplate the uncomfortable possibility that Tom Wolfe might yet be seen as our best writer,” Norman Mailer wrote in The New York Review of Books. “How grateful one can feel then for his failures and his final inability to be great – his absence of truly large compass. There may even be an endemic inability to look into the depth of his characters with more than a consummate journalist’s eye.”

“Tom may be the hardest-working show-off the literary world has ever owned,” Mailer continued. “But now he will no longer belong to us. (If indeed he ever did!) He lives in the King Kong Kingdom of the Mega-bestsellers – he is already a Media Immortal. He has married his large talent to real money and very few can do that or allow themselves to do that.”

Mailer’s sentiments were echoed by John Updike and John Irving.

For many years, Wolfe lived a relatively private life in his 12-room apartment on the Upper East Side with his wife, Sheila (Berger) Wolfe, a graphic designer and former art director of Harper’s Magazine, whom he married when he was 48. She and their two children, Alexandra Wolfe, a reporter for the Wall Street Journal, and Tommy Wolfe, a sculptor and furniture designer, survive him.

Thomas Kennerly Wolfe Jr was born March 2nd, 1930, in Richmond, Virginia. His father was a professor of agronomy at Virginia Polytechnic Institute, editor of the Southern Planter, an agricultural journal, and director of distribution for the Southern States Cooperative, which later became a Fortune 500 company. His mother, Helen Perkins Hughes Wolfe, a garden designer, encouraged him to become an artist and gave him a love of reading.

He enrolled at Yale University in the American studies program and received his doctorate in 1957. After sending out job applications to more than 100 newspapers and receiving three responses, two of them “no”, he went to work as a general-assignment reporter at The Springfield Union in Springfield, Massachusetts, and later joined the staff of the Washington Post. He was assigned to cover Latin America and in 1961 won an award for a series on Cuba.

In 1962, Wolfe joined the Herald Tribune as a reporter on the city desk, where he found his voice as a social chronicler. Those were heady days for journalists. Wolfe became one of the standard-bearers of New Journalism, along with Jimmy Breslin, Gay Talese, Hunter Thompson, Joan Didion and others. Most were represented in The New Journalism (1973), an anthology he edited with EW Johnson.

Wolfe’s later novels earned mixed reviews. Many critics found I Am Charlotte Simmons (2004), about a naïve freshman’s disillusioning experiences at a liberal arts college fuelled by sex and alcohol, unconvincing and out of touch. In Back to Blood (2012), Wolfe created one of his most sympathetic, multi-dimensional characters in Nestor Camacho, a young Cuban-American police officer trying to navigate the treacherous waters of multi-ethnic Miami.

In the end it was his ear – acute and finely tuned – that served him best and enabled him to write with perfect pitch. And then there was his considerable writing talent. – NYT service