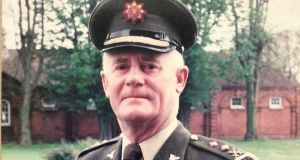 Michael Shannon, who as a platoon commander in the Army participated in an attempt to relieve his fellow Irish peacekeepers in the Jadotville seige

Michael Shannon, who has died aged 83, was one of the first Irish soldiers to serve overseas with the United Nations (UN), during the UN operation in the Democratic Republic of the Congo in 1960-’64.

He went on to serve in several UN operations, including those in Cyprus, Lebanon – a service which included two consecutive tours in 1984-’85 – and in Central America in the late 1980s.

After his retirement from the Army in 1994, he went on to work with the Organisation for Economic Co-operation and Development (OECD) and the European Union (EU) monitoring elections firstly in the then newly democratic South Africa, and later in Bosnia-Herzogovina and Russia.

These experiences led him to become involved, in retirement, with his old friend Brendan O’Regan, in the Peace Institute, based at the University of Limerick, now subsumed into the Co-Operation Ireland organisation. In this role, where he was chairperson between 1999-2006, he facilitated outreach programmes bringing together young people from both sides of the sectarian and political divide in the North.

The now-retired director of outreach programmes at the institute, Dorothy Cantrell, told The Irish Times this week that Shannon was “a gentleman to his fingertips, totally reliable and responsible”, and recalled especially his logistical abilities when organising a country-wide concert celebrating the 50th anniversary of the foundation of the UN. This involved 315 children and adolescents from the North and a full orchestra performing in Limerick, Dublin and Derry with composer Mícheál Ó Súilleabháin, mezzo-soprano Suzanne Murphy, and pianist John O’Conor.

These gentlemanly qualities had been severely tested during his Congo experience, when as a platoon commander in the Army’s B company, 35th infantry battalion, he had been involved in the controversial attempt to relieve his fellow Irish UN peacekeepers at Jadotville in September, 1961. His unit, with others, part of the “Force Kane”, so-called after its Irish commander, Commandant Kane, was ambushed by mercenaries and rebel Katangese forces at a bridge at Lufira near Jadotville where they were bombed by Fouga fighter-bomber jets and, totally out-gunned and ill-supported by their UN superiors, forced to return to base.

In his book on the siege, Siege at Jadotville, (Maverick House, 2005) journalist Declan Power argued that Shannon’s superiors had let the Irish troops very badly down on the occasion, a view supported by Pat Dunleavy, one of the Irish troops eventually forced to surrender at Jadotville after they ran out of ammunition, in his contribution to the Irish Academic Press book The Irish Army in the Congo (2005) edited by David O’Donoghue.

Shannon’s later involvement with Africa came in the run-up to the first democratic elections to be held in the new South Africa, during which he met both Nelson Mandela and the current South African president Cyril Ramaphosa, then a trade union leader and major figure in the African National Congress (ANC). He was in charge, inter alia, of the EU’s budget for the project which came to IR£5million, and, famously, was able to come back to Brussels after it was all over and give the (perhaps very surprised) EU Commission £1million in unspent money, an efficiency, and a perhaps integrity, unthought-of today.

Shannon remained active in voluntary work in retirement, being one of the leading members of the Rotary Club of Limerick, which awarded him its “Double Ruby”, the highest such honour in that organisation. He was only the second recipient of such an award in the Limerick club in more than 50 years.

This was, in part, for his very significant involvement, as director, in St Gabriel’s orthotic school and centre at Dooradoyle, Limerick, where more than 40 children with special needs attend daily and which supplies outreach and support services to more than 400 others on an outpatient basis in the mid-western region. He was what his fellow-Rotarian and long-time friend, Pat Mullane, told The Irish Times this week “the driving force” behind the annual Rotary annual band concert in Limerick which raises over €10,000 each year for various local charities.

Michael Shannon was a native of Kilrush, Co Clare, one of eight children of Patrick and Katharine (née Downes) Shannon. Patrick Shannon, a clerk for a firm of solicitors, was a member of the west Clare IRA during the War of Independence, and a close associate of Peadar Clancy who died in the Bloody Sunday massacre at Croke Park.

He was educated at Kilrush Christian Brothers’ School, and the Cadet School at the Curragh, being commissioned in 1955. A keen Gaelic footballer in his youth, he won two county championship medals with Kilrush Shamrocks, and later played rugby with Dolphin while based with Southern Command in Cork.

He and his wife, Jean (née Callaghan), were also good badminton players. Jean and their children, Caroline, Aoife, Oonagh, John and Michael jnr., survive him, with his brothers, Anthony, Frank, Thomas and Patrick, and his sister, Rita. His sisters, Katharine and Mary, pre-deceased him.