Babara Windsor obituary: A giant of the British entertainment industry 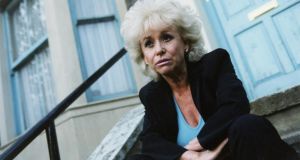 Barbara Windsor Windsor on the set of EastEnders in 1998. Photograph: Andrew Testa/The Observer

Although physically tiny at 4ft 10in tall, Barbara Windsor, who has died aged 83, was a giant of the British entertainment industry, conquering films, theatre and television in a career that spanned 60 years, 50 of them as a top star. After some notable stage work, Windsor first came to real prominence as a member of the Carry On team for nine hugely popular films starting in 1964 with Carry On Spying. In them she usually played a wide-eyed blonde with a friendly grin, sometimes knowingly sexy and sometimes naive or innocent, but invariably given at some point to what one observer called “the dirtiest laugh in show business”. She identified her appeal with characteristic bluntness: “You could always find a barmaid who looked like me.”

When the series petered out in the late 1970s Windsor returned to the stage, then in 1994 joined the regular cast of the BBC serial EastEnders, scoring another triumph as Peggy Mitchell, the landlady of the Queen Vic pub. She played Peggy for more than 20 years, off and on.

Born in Shoreditch, east London, Barbara was the daughter of John Deeks, a bus driver, and his wife, Rose (nee Ellis), a dressmaker. When her hard-drinking and charismatic father was called up into the army at the start of the second world war, she moved with Rose to the Ellis family home in Stoke Newington, north London. They lived with Rose’s parents, her brother, Ronnie, and sister, Dolly, and Dolly’s husband, Charlie Windsor, and son, Kenny. Dolly looked after baby Barbara while Rose worked as a seamstress in the West End.

At the height of the bombing Barbara was evacuated to Blackpool. The couple who took her in tried to sexually abuse the little girl, but her screams were heard by a schoolfriend, whose parents called the police. Barbara then moved in with the friend, and the parents, charmed by her natural singing and dancing abilities, sent her for lessons. When she returned to London it was with a note from a Blackpool dance teacher that read: “Barbara is a born show-off who loves to perform.”

Impressed by this, Rose enrolled her daughter with Madame Behenna and Her Juvenile Jollities, a dance school in Stoke Newington. She passed her 11-plus examination with ease, scoring the best marks in the whole of north London, and secured a place at a local Catholic grammar school, Our Lady’s Convent.

Madame Behenna entered Barbara for singing and dancing competitions, which she often won, and she came to the attention of a talent scout, Brian Mickey, who got her a part in panto at the Wimbledon theatre. But her school refused to give her the time off, and she had to drop out. Nevertheless she persevered with her stage ambitions and at 14 was accepted by the Aida Foster stage school in Golders Green.

In 1952 she made her first professional appearance, playing an orphan in the musical Love from Judy, which opened in Coventry and then moved to the West End of London. In the same year she adopted her stage name in memory of her cherished uncle Charlie, who sang in local pubs and told her stories about Marie Lloyd and the other great music hall stars he had seen as a child.

Love from Judy toured for two years, but Windsor also found time to make her screen debut in The Belles of St Trinian’s (1954) as a schoolgirl leaning out of a bus window shouting: “Ta-ta, see you in the hols!”

Windsor had made a great impression on the star of Love from Judy, Johnny Brandon, who asked her to appear in a sketch with him in the BBC television show Variety Parade, also in 1954. They then toured the sketch from the show. But the act was not a success, partly because each night they were upstaged by an indefatigable young comedian just starting to make a name for himself – Ken Dodd.

After a promising start the stage work became patchy and at times Windsor was obliged to work as a shop assistant after leaving Aida Foster. She sang with Ronnie Scott’s band for a while, and appeared in revue with Fenella Fielding, Barbara Ferris, Jill Gascoine and Amanda Barrie.

Windsor had relationships with Scott and many others, including Bing Crosby’s son, Gary, the actor Anthony Newley, George Best, Maurice Gibb, the American film star Victor Mature, the gangsters Reggie and Charlie Kray and, much later, her Carry On co-star Sid James. As she put it in her 2001 autobiography, All of Me, with typical candour: “I’d discovered the joys of sex and I’d become a right little goer, putting it about freely.”

A change in Windsor’s professional fortunes began in 1960 when she was given a showy part in Joan Littlewood’s Theatre Workshop production of Fings Ain’t Wot They Used T’Be, from the play by Frank Norman, with songs by Lionel Bart, at the Theatre Royal, Stratford East. This was followed by Sparrers Can’t Sing, by Stephen Lewis, the same year, and she went on to star in the film version of the play two years later. In 1961 she was in the first series of the hugely successful BBC television comedy The Rag Trade, with her Fings co-star Miriam Karlin.

Windsor became a household name three years later, after Peter Rogers and Gerald Thomas, respectively producer and director of the Carry On series, which began in 1958 with Carry On Sergeant, cast her as secret agent Daphne Honeybutt in Carry On Spying in 1964. Rogers and Thomas had been impressed by Windsor’s naturalistic, poignant performance in Sparrers Can’t Sing. But neither of those qualities was required for the Carry Ons in which she co-starred, and she became completely identified in the public mind as the bubbly girl with the fruity laugh she invariably played.

Her most famous scene in the series came in Carry On Camping (1969), where her bikini top flew off during a scene showing female campers taking part in an outdoor aerobics class. It is a funny and joyful scene but the reality was different: filmed on a freezing day with the mud painted green and a grumpy prop man yanking on a fishing line attached to the bikini.

In 1964 Windsor married the gangster and Krays associate Ronnie Knight. Though stormy and sometimes violent, the marriage lasted for more than 20 years, ending in divorce in 1985. Several years after their parting, Knight was jailed for his part in the £7 million Security Express robbery of 1983.

Underworld types evidently reminded Windsor of her father, who was absent from her life for decades after he walked out of the family home when she was 15. She said she had opted to remain childless because of the rejection she had experienced at his hands. In her autobiography she described meeting the Krays backstage after a performance of Fings Ain’t Wot They Used T’Be. “Three guys came in and it was Ronnie, Reggie and Charlie, reminding me very much – Ron [Knight] was the same – of my father, always that sharp double-breasted suit, white shirt and nice blue tie. Very charming.”

Instinctively anticipating an era of full disclosure by entertainment celebrities and reality stars, Windsor from her earliest years of success often spoke openly about personal health and emotional issues, her turbulent love life, her five abortions and the way she was attracted to villainous men. Because of this, and that friendly grin, the public felt they almost knew her like a neighbour rather than a performer. She was “a part of the people”, as the great variety star Chesney Allen once said of his and Bud Flanagan’s relationship with the public. “There was no barrier.” This was strongly reinforced in 1994 when Windsor joined the cast of EastEnders as Albert Square’s matriarch.

After her marriage to Knight had ended – Windsor, with untypical but understandable reticence, always claimed she had known nothing about his criminal activities – she married Stephen Hollings, a chef. They bought a pub and restaurant in Buckinghamshire, which collapsed along with their marriage, leaving her with hefty debts. “It was like a million,” she said. “I’d never earned that sort of money. So EastEnders came along at a very lean time for me, when I thought I was going to lose my house.”

Effortlessly dominating every scene in which she appeared, often playing unsympathetically against her popular image, Windsor demonstrated acting skills unsuspected by those who knew her only from the Carry On movies. Her impression on the show was indelible, and in 2009 she won a British Soap award for lifetime achievement.

Windsor left EastEnders in 2010 but returned for several episodes between 2013 and 2015. When Peggy Mitchell died of breast cancer in 2016 it seemed like the end of an era in British popular entertainment. The actor Ross Kemp, who had played Peggy’s son Grant, returned for her final scenes after 10 years away.

In 2018 Mitchell announced that Windsor had been diagnosed with Alzheimer’s disease in 2014. For three years the development of the illness was gradual, but soon after her 80th birthday her condition deteriorated considerably and she withdrew from public life. In 2019 she delivered a letter calling for better care for people with dementia to 10 Downing Street on behalf of the Alzheimer’s Society.

She is survived by her husband. – Guardian