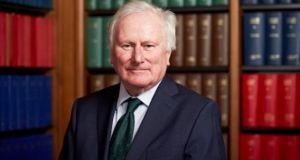 Brian Kerr, Lord Kerr of Tonaghmore, who has died aged 72 after a short illness, was an energetic courtroom interrogator who became an ardent defender of the individual citizen’s human rights. The longest serving justice on the UK supreme court and a former lord chief justice of Northern Ireland, he was a progressive figure whose rulings advanced the rights of women and children and resolved controversies from the Troubles.

Along with supreme court colleagues, he found against the government in both Brexit-related challenges – over Article 50 triggering the UK’s departure from the EU in 2017 and the prorogation of parliament the following year. Of the prorogation case, he later told the Guardian: “The government’s position ought to be strongly tested . . . It was an intensely interesting case. I failed to resist the temptation to ask questions.”

He was most proud of the court’s 2018 ruling that eventually led on to the decriminalisation of abortion in Northern Ireland. With other justices, he concluded that the Northern Ireland Assembly’s law on abortion was incompatible with human rights.

In 2019 he handed down the decision that the official investigation into the 1989 killing of the Belfast lawyer Pat Finucane – who was murdered by loyalist gunmen under the direction of a British army agent – failed to meet the required human rights standards.

Kerr and his fellow judges were criticised by some legal commentators for their ruling earlier this year that the Sinn Féin leader Gerry Adams had been illegally interned at the start of the Troubles because the then secretary of state, Willie Whitelaw, had not personally signed the authorisation.

According to Lady (Brenda) Hale of Richmond, the court’s former president and his longtime colleague, Kerr had “not seemed particularly radical” when lord chief justice of Northern Ireland but proved himself to be “an excellent lawyer prepared to use his legal skills creatively to advance the law when it needed to advance”. Kerr resisted suggestions from other justices he might become president or deputy president of the supreme court.

Among lawyers and staff in the supreme court building in Westminster, Kerr was renowned for his impish humour and warm-hearted informality – although he preferred to keep his room at an unusually cool temperature. Colleagues remembered him inviting television presenter Sandi Toksvig to lunch and serving home-made strawberry ice-cream.

Lord (John) Reed of Allermuir, the current president of the court, said Kerr had been “more determined than most to correct injustice where he saw it”, which led him to be described as the “conscience of the court”.

He wrote more numerous dissenting judgments, demonstrating his determination to ensure that minority judicial views were also heard. Brice Dickson, an emeritus law professor at Queen’s University Belfast, calculated that Kerr sat in no fewer than 283 cases during his time on the supreme court, delivering his own separate judgment in 112 of them. Kerr, he observed, “seemed to grow more and more liberal as he climbed the judicial ladder”.

Lord (Nicholas) Wilson of Culworth, another contemporary, said Kerr “seemed to operate on a presumption, rebutted only in rare circumstances, that, in a dispute between the citizen and the state, the law, if properly analysed, would be found to be on the side of the citizen”. In one case Kerr told Sir James Eadie, the government’s chief advocate, that: “You have not yet persuaded me.” To which Eadie replied: “But I fear, my lord, that I have never persuaded you of anything.”

Brian Kerr was born and brought up in Lurgan, Co Armagh. His father, James, qualified as a solicitor but did not practise, and worked as a bicycle salesman; he died when his son was 10. His mother, Kathleen (nee Murray), was a teacher.

Educated at St Colman’s college in Newry, Co Down, Brian had ambitions to attend Oxford University but was never entered for the exam because, he later explained, “my school felt that that was a slightly ridiculous aspiration”.

At Queen’s University Belfast, he read law. He was called to the bar in 1970. That year he married Gillian Widdowson, and they had two sons.

He began his legal career as the Troubles were intensifying, working through the years of bombings and sectarian assassinations. He took silk in 1983 and five years later became senior crown counsel, which resulted in him representing the crown in significant terrorist prosecutions and other cases.

In 1993, he was made a high court judge. Between 2004 and 2009, he served as lord chief justice of Northern Ireland. He recalled police protection officers driving him everywhere and living in his garden “365 days a year”.

The IRA had targeted and killed Northern Ireland judges, murdering Lord Justice Maurice Gibson in a roadside bomb in 1987. Of the security, Kerr said: “I’m not going to suggest it wasn’t intrusive in family life. You adjust to it.”

In 2009, he became a law lord and months later transferred, along with other members of the appellate committee of the House of Lords, to form the UK’s supreme court. The court traditionally has one justice from Northern Ireland and two from Scotland; the rest are from England and Wales.

Tom Hickman, a professor at University College London, saw Kerr as the most no-nonsense judge on the supreme court until his retirement at the end of September. He always felt Kerr could see “straight through the legal and factual web spun by counsel and he could see exactly what the real issue was in the case”.