The Irish Times view on the nurses’ dispute: Assessing the implications 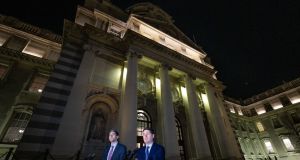 When is a pay deal not a pay deal? The answer appears to be when a group with a lot of industrial muscle decides to look for some more. The nurses’ dispute ended, as was always likely, with both sides giving some ground on their initial position.

The worry for the Government is not so much the cost of the offer made to nurses as the risk that this will lead to knock-on claims from other groups, ahead of the end of the current public sector pay agreement in the Autumn of next year.

The threat of a full three-day stoppage by nurses this week clearly pushed the Government to make an offer to them. The risk now is that other public sector groups, detecting weakness, will also opt for industrial action in pursuit of their claims, posing a threat to the public finances.

As we have seen with the children’s hospital episode, spending more in one area means less cash elsewhere, or higher taxes.

Much of the debate will come down to the full detail and costings of what is on offer to the nurses. It appears that the average gain will amount to around 2.5 per cent, but newer entrants will generally receive more. Full details and costings are needed, including the expected savings and productivity gains – and how these will be measured.

In dealing with the nurses’ dispute, the Government has tried to square the circle by offering pay increases through regradings, while arguing that these are not generalised rises. It looks like a flimsy enough argument. True, in some cases it involves accelerating increases already in the pipeline. But the record of management of the health service gives limited confidence in promises that part of this will be paid for by savings or by changes in work practices.

The deal offered to the nurses will be closely assessed by other public servants. There is a lingering sense of discontent in many areas as a result of decisions taken during the economic crisis, when public servants feel they were unfairly treated.

But a lot of additional resources have gone back into the public service since 2014, with the pay and pensions bill up 26 per cent and a strong rise in employment numbers. There is no evidence that, in general, public servants are underpaid or overworked compared to those in the private sector, particularly when their pension provision is counted in.

What happens next may be framed as much by Brexit as by the reaction of the other trade unions.

A hard no-deal Brexit will threaten significant pressure on the public finances and major uncertainty. Irrespective of this, however, some unions may be tempted to test the Government’s resolve. With public spending now firmly on the rise, the Government’s case that it is a careful manager of the public finances is coming under ever greater pressure and will be a key battleground in the next general election campaign.

1 Costa living: ‘Move home to Ireland? I’d hate it’
2 Steve Coogan: ‘Come Out, Ye Black and Tans is two fingers to the British’
3 Anti-Irish bigotry in Britain has not gone away
4 Coronavirus: Almost 60 new cases recorded in Italy as two die
5 Blue Brexit passports made by European firm to be issued from next month
Real news has value SUBSCRIBE