Evaluation of policies to tackle educational disadvantage at all levels essential 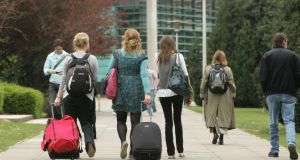 ‘We live in an era where young people from some social classes proceed to higher education at a rate of virtually 100 per cent, whereas in other cases the figure is less than a third of that.’ Photograph: Alan Betson

It may be argued that under the Constitution all that is guaranteed is free primary education, or that as the minimum age for leaving school is 16, the State’s obligations end there. In that case, one hopes the wisdom of the late Supreme Court Judge Brian Walsh permeates the thinking of the Court of Appeal.

To mark the 50th anniversary of the adoption of the Constitution in 1937, he was interviewed by the journalist and historian John Bowman. He made the point that the document is written in the present tense and must be interpreted by the concepts of today: “If tested today, the courts would have to decide what is the minimum that could be described as free primary education today which is probably very, very different from what was primary education 50 years ago.”

Whatever the Court of Appeal decides, the reality is that we live in an era where young people from some social classes proceed to higher education at a rate of virtually 100 per cent, whereas in other cases the figure is less than a third of that. Would the Minister and his officials not make better use of their time, expertise and the taxpayers’ resources tackling the issue of educational disadvantage more robustly as opposed to engaging in a King Canute-like exercise in the Four Courts?

Figures released in late December 2018 clarify the current position in relation to those from two socioeconomically disadvantaged groupings. In the case of those from semi-skilled or unskilled manual worker backgrounds, 36 per cent are proceeding from school to higher education, while the figure for those in the non-manual worker category is 27 per cent. While some progress can be detected across both categories, these figures fall far short of the 54 per cent target set in 2008 by the National Access Office, which is part of the Higher Education Authority (HEA).

A number of questions are pertinent. The first issue to consider is whether or not the 54 per cent target was so ambitious as to be unrealistic. Many would suggest that in fact to be the case. On the other hand, those who devised it, including those in the Department of Education and Skills, must have believed this target at the time to be attainable. Either way, two further questions must be asked. The first is the extent to which the relevant authorities, including the department, understand the deep-seated and complex nature of educational disadvantage. The second is whether or not the policies which have been adopted to date have had a sufficiently meaningful impact on combating educational disadvantage.

Research spearheaded by Pat Clancy of UCD in the 1980s underlined the extent to which a young person’s chances of accessing higher education depend heavily on her or his experiences earlier in the education system. Hence, while the HEA and higher education institutions have an important role to play and could possibly do more than is currently the case, interventions at pre-school, primary and post-primary levels are critical to realising any significant improvement.

Deis (Delivering Equality of Opportunity in Schools) has been the key policy aimed at countering educational disadvantage for about 15 years now. While the Deis initiative has led to some improvements, the two-tier nature of our access to higher education figures suggests the programme is not comprehensive enough and inadequately resourced.

A welcome feature of the current access plan is that, for the first time, figures are provided for progress rates from Deis schools to third-level education. In the current plan it was noted that Deis schools accounted for 12 per cent of entrants to higher education institutions. In the recent review it was noted that the figure had increased by 1.5 percentage points. An improvement, yes, but hardly an acceptable one. Furthermore, about 50 per cent of pupils from disadvantaged backgrounds attend schools which are not designated disadvantaged and therefore are excluded from the dedicated initiatives under the Deis scheme aimed at tacking educational disadvantage.

The final issue which requires urgent attention is the absence of an effective framework to advance change. It was reasonable in the late 1960s to assign the question of access to the HEA. The government at that time believed it had brought about equality of opportunity at primary and post-primary level. Subsequent experience has illustrated that this optimism was seriously misplaced.

The challenges that need to be overcome in achieving a satisfactory progression pattern through the education system to higher education are quite intractable. Significant numbers of people miss out on the chance to realise their dreams and potential in this regard.

It is reasonable to suggest that after almost 50 years a new approach is urgently required. A detailed and ongoing evaluation and monitoring of our policies to tackle educational disadvantage at all levels is essential. Of course, any such an exercise would almost certainly have to focus on weaknesses and deficiencies in provision at first and second levels as well as on a failure to provide adequate resources at third level.

An organisation such as the HEA has no role whatsoever in educational provision other than in higher education so is hardly well placed to offer a detailed critique of provision at earlier stages. Furthermore, as it operates under the aegis of the department, it does not enjoy the independence necessary to fulfil such a role.

A new approach is therefore both imperative and overdue. A properly resourced national access office to oversee policies designed to tackle educational disadvantage at all levels should be established on an independent statutory basis.

1 Brendan Gleeson as Donald Trump: ‘A mediocre impression and possibly a great performance’
2 Aer Lingus staff say they are living in ‘near poverty’ and unable to cover rent
3 Coronavirus: Warning of similar measures for other counties as Donegal moves to Level 3
4 Séamus Woulfe: The last man standing in Golfgate is set to learn his fate
5 Focus on cross-border movement as Donegal prepares for Level 3 restrictions
Real news has value SUBSCRIBE