Mary McPartlan obituary: ‘One of the greatest traditional singers of her generation’ 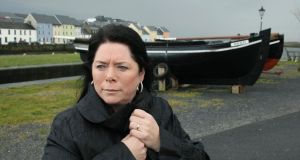 Mary McPartlan: her boundless energy led her to play a memorable part in the Druid’s production of The Midnight Court. 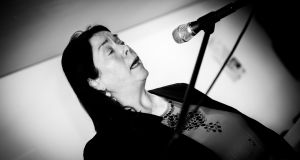 Mary McPartlan: she made the songs she sang her own while delicately revealing the universal truths in each.

Mary McPartlan was a singer who mined the seam of every song she sang to its deepest core. She was a woman of many parts. A trade union activist and a director of the Galway Simon community, she championed the rights of those marginalised at home and away. An arts administrator, a television and theatre producer, a Fulbright scholar, Mary McP (as she was widely known) possessed powers of persuasion that would have been the envy of the wiliest diplomat.

Mary was the eldest of six children, reared in the townland of Comalth, outside of Drumkeeran. Her mother, Betty Ward, was from Plumbridge in Co Tyrone, her father was known as Tom Patsy, to distinguish him from the many other McPartlans in Leitrim. Growing up, Mary was often in loco parentis, playing a big, generous part in the rearing of her three younger brothers, Pakie, Séamus and Martin, and her two younger sisters, Gertie and Pauline. The depth of her heartache at Pakie’s untimely passing in 2015 was a measure of her lifelong allegiance to kith and kin, and to the riches she recognised that came from growing up in rural Leitrim.

Mary’s compass pointed her in the direction of a life in the arts early on. Founder of the Riabhóg Singers Club and of the Skehana Theatre Company, her boundless energy led her to play a memorable part in the Druid’s production of The Midnight Court. Forever intent on supporting artists in the best and most imaginative ways possible, it was she who conceived of what are now the TG4 Gradam Ceoil Awards, produced many TV programmes including Flosc, and over the past decade, founded the Medical Orchestra in NUI Galway. At the same time, Mary led the visionary Arts in Action programme, a jewel in the university’s crown, drawing the finest artists and countless international students to NUIG.

Her Fulbright scholarship led to another remarkable odyssey, this time to Kentucky’s Berea College, from where she researched the songs and legacy of Jean Ritchie. Her final, superb album, From Mountain to Mountain, celebrated the rich shared histories of Kentucky’s Appalachian communities and those of her own home place, Drumkeeran, and led to yet another inspired collaboration, this time with American jazz pianist, Bertha Hope.

Mary was indefatigable in everything she did. She could be impatient and occasionally cranky, as she struggled to understand why everyone else didn’t possess the boundless energy and enthusiasm which characterised her stewarding of every artistic odyssey she embarked on.

She was the powerhouse who conceived and produced She Moved Through The Fair: The Legend of Margaret Barry, bearing rich testament to her commitment to sharing Barry’s extraordinary life and talent with those who knew nothing of her.

Even in the midst of her medical treatment, Mary’s ear was poised for musical adventure. While in hospital in Galway, she detected the inherent musicality of the numerous beeps emanating from the machinery that surrounded her. Before her doctors knew what was happening, she had persuaded them to allow her dear friends, musicians Máirtín O’Connor and Garry Ó Briain, in to record the sounds, which formed the basis of a new composition, subsequently premiered in Galway.

At her core though, Mary was a singer. Her singing of The Holland Handkerchief, Sanctuary (based on a poem by her lifelong friend, Vincent Woods) and of Shane MacGowan’s Rainy Night in Soho saw her plant a depth charge in each song, making them utterly her own while, at the same time, delicately revealing the universal truths in each. And when Mary sang that iconic line from Rainy Night in Soho, “You’re the measure of my dreams,” the words reverberated long after she left the stage.

Her long time close friend and touring companion, President Michael D Higgins, paid fitting tribute to her, saying that “Mary brought the truth of emotion and empathy to her singing, and her acclaimed debut album, The Holland Handkerchief, established her as one of the greatest traditional singers of her generation.’

Mary is survived by her husband, Paddy (Noonan), daughters, Mairéad,  Méabh and Niamh, son David, brothers, Martin and Séamus and her sisters, Pauline and Gertie,and her grandchildren Cillian, Kate and Molly.*

*This article was edited on April 30th 2020 to correct the date of death and ammend the list of surviving relatives.