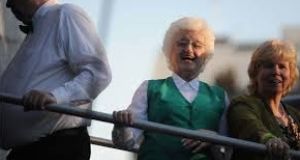 Alice Kennedy with the Irish Elderly Choir: her life took an unexpected turn when she became involved in community activism. 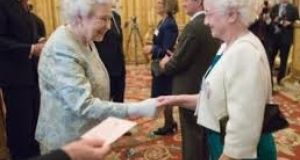 Alice Kennedy, who has died aged 83 from the effects of Covid-19, lived an apparently innocuous life as an Irish emigrant in London, working first in Woolworth’s after her arrival there in the early 1960s, and then for 39 years for the John Lewis department store, becoming a manager in charge of complaints and returned goods.

With her retirement, however, and the early death of her husband, Frank, a native of Tipperary – the marriage had been a late one, and the couple had no children – her life took an unexpected turn into community activism with and among her fellow Irish emigres. She made such an impression that her passing was noted by President Higgins, who remarked in a letter to her brother, Séamus, who lives in her family’s native Co Laois, that “Alice epitomised what is best in Ireland’s diaspora, having made such a valuable contribution over several decades as an active leader within London’s Irish community.”

President Higgins and Sabina Higgins hosted Kennedy and her colleagues from the Irish Elderly Advice Network at Áras an Uachtaráin twice in recent years.

Kennedy was one of a number of older Irish people who set up the network, a support group for retired Irish emigrants in the UK, in which she was to play a central role. Sally Mulready, the network’s CEO, told The Irish Times this week that Kennedy was “a key figure” in its operations.

Kennedy ran the Tara Pensioners’ Group from a 17th-floor flat in a tower block in Kentish Town. It operated for more than 10 years as a meeting place and support for elderly Irish people and only came to an end when, through the death of its members due to old age and infirmity it was reduced to two or three members meeting each week.

Kennedy then turned her attention to setting up the Irish Elderly Choir, which had extraordinary success as a gathering point and expressive outlet for older Irish people with artistic and musical interests perhaps overlooked, and certainly out of fashion. As Mulready puts it, the “whole idea was to keep alive the songs of their generation,” such as those by Thomas Moore and other traditional Irish melodists who would have been celebrated by, for example, RTÉ Radio shows in the 1950s and 1960s. “The choir was more than that,” Mulready added. “It was an opportunity for people to do something together.”

It had very notable success, appearing at one stage in the Royal Albert Hall with Foster and Allen, and touring to Irish centres in many parts of England. It expanded to take in a drama group, and Irish language and culture classes, including the teaching of Irish traditional music to a new generation of young people of Irish heritage, which continues at the Irish Cultural Centre in Hammersmith in London.

In recent years, the choir toured Irish centres with a play, A Nuns’ Chorus, written by Mulready. It addresses the issues of a generation of Irish women who, as its author puts it, “surrendered themselves to living the rest of their lives in a convent.”

Kennedy played the role of the Mother Superior, Sister Imelda. Her long-time friend, Maura Haughey, who played a younger nun in the production, this week described Kennedy’s performance as “absolutely first class . . .I don’t know how she will ever be replaced.”

Most recently, the choir performed at a St Brigid’s Day reception in the Irish Embassy in London, part of which is available to view on Kennedy’s page on Facebook, along with many tributes.

Alice Kennedy was a native of Clonaslee, Co Laois, one of 12 children of William Culleton, a Land Commission worker, and his wife Mary (nee Tobin), a homemaker originally from a farming family near Clones, Co Monaghan. Her brothers, Michael (Mick), Christopher (Christy) and Séamus survive her; she was predeceased by her siblings Paddy, Liam, Katherine (Kit), Mary-Anne, Jack, Joe, Esther and Alice, the latter her sister who died in infancy before she was born and after whom she was named.

Kennedy was especially aggrieved in 2014 when Kit, Paddy and Jack, all of whom had also settled in the UK, each passed away in the one year.

It’s time for summery food. Here are four easy dressings that work for every salad
Real news has value SUBSCRIBE