Festive season has been a gigantic blind spot for me, I’ve been happy to indulge in thinking it just happens by magic 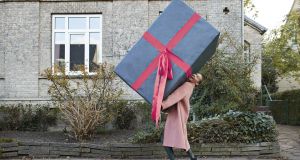 Women are the people who make Christmas happen. Photograph: iStock

I’m not the most Christmassy person. I’ve nothing against it. A bit like with dancing or golf, I can appreciate other people appreciating it. It just never quite feels like it’s for me. It makes me anxious, especially now, in the Covid-hasn’t-gone-away era: all the shopping-frenzied crowds, the desperate need to make this one super-special, all the relations you have to visit who insist on cramming you with food and alcohol; as if there was a famine outside and their house is the last one with any supplies.

It’s not that I haven’t had any pleasant Christmas experiences. I have had many. But close to the top of that list, certainly in the top five, was a time when, due to complicated circumstances, I ended up spending Christmas Day by myself.

I’ve mentioned here before that to alleviate my stress, I try to get all the present buying done by the end of November, fail to do so and I end up getting stressed. But thanks to Level Five and Conor Pope’s excellent list of Irish online retailers, I finally managed it this year. (One delivered the product the same day I ordered it.)

This enabled me to embark on a long-cherished plan to ignore Christmas for the month of December; which failed miserably. Having the opportunity to not think about it only made me think about it more, specifically the ways in which I don’t participate.

For instance: I can’t remember the last time I sent a Christmas card. I’m not sure if I’ve ever sent one. I don’t send those ‘e-cards’ either. Apparently, they are still a Thing.

It’s not that cards don’t leave and arrive in our house. It’s just that, armed with the flimsy reasons I’ve outlined, I don’t do it.

Herself does it. She does everything. Christmas dinner in our home is complicated in that four of the offspring are varying degrees of lactose intolerant. We have two vegans and an Irish vegetarian; meaning she will occasionally eat chicken. But how much preparation for this have I undertaken? None: I’m too busy trying to ignore Christmas. Meanwhile, Herself has been making extensive lists and has been buying ingredients since the start of November. She’s been buying alcohol and (unsuccessfully) hiding it.

These are not secret preparations: since the start of last month she’s regularly updated me on what part of the master plan has been executed. And even though I’ve heard these things and taken them in, I’ve still somehow managed to maintain a wall of oblivion between me and what’s happening.

I’m not too thrilled to be admitting this. When it comes to doing my fair share around the house, I’m perhaps a C-. I do all the ‘man jobs’ but other things too. Bit of hoovering, bit of ironing, bit of cooking. But I can lapse. I get distracted. There’s always room for improvement. But my pathetic mitigation is that at least I’m aware of it. Christmas, it seems, has been a gigantic blind spot for me, where I’ve been happy to indulge in the magical thinking that Christmas just happens by, you know, magic.

But like any other sort of magic, there’s planning and a lot of hard work: usually done by women. Men buy the tree and put up decorations. And if they were able, go to the pub.

As you know, January 6th is traditionally known as Women’s Christmas: when the women of Ireland are ‘allowed’ to go and celebrate after all their hard work. But what this tells us is that Christmas is in fact Women’s Christmas – because women are the people who make it happen. If there’s a row on the day because Mammy is a bit cranky, it’s not because she hates fun or she isn’t Christmassy. It’s because she’s knackered.

I know what you’re thinking. Eventually, I asked Herself to grade me. There was a detailed breakdown, but overall I got a C+. Result. Best Christmas ever.