Will the Government continue subsidising hybrids? 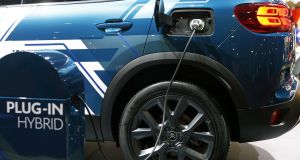 An electric charger for a Citroen SUV C5 Air Cross plug-in hybrid is on display at the Paris Motor Show. Photograph: Chesnot/Getty Images

The prospect of hybrid and plug-in hybrid cars losing their Government subsidies is a looming possibility as the we roll towards budget day in October. For the past decade, the Irish exchequer has given both hybrid and plug-in hybrid models a €1,500 or €2,500 discount, respectively, on their vehicle registration tax (VRT) costs, but it’s possible that there might be a move to follow the UK’s lead to reverse that subsidy, and double down on the promotion of electric cars powered only by batteries.

The UK made that move, amid a storm of protest, last year saying that research indicated that too many drivers were buying plug-in hybrids to take advantage of the price subsidy and the subsequent business use tax breaks, but then not actually plugging them in. Do that, and you’ll find that most plug-in hybrids are actually thirstier than conventional diesel or petrol models. As a case in point, the old BMW X5 40e plug-in hybrid had claimed fuel economy of 85mpg (3.3 L/100km), but when we tested it (without plugging in) that dropped to approximately 21 mpg (13.5 L/100km) in daily use.

A spokesperson for the Department of Climate Action and Environment told The Irish Times that Minister Richard Bruton will publish the Government’s Climate Action Plan shortly and that “all policies to reduce emissions, including how best to encourage take-up of low-emission vehicles are being considered in the context of the plan”.

While that doesn’t specifically mention hybrids, the spokesperson then went on, very pointedly, to only discuss electric cars: “The Minister has approved funding of up to €10 million to support ESB eCars to develop a nationwide, state-of-the-art electric vehicle fast-charging network capable of facilitating large-scale electric vehicle uptake over the next decade.”

Hybrids and plug-in hybrids are becoming more popular with buyers, which will inevitably put a strain on the public purse if it is to continue subsidising them. Sales of hybrids have risen by 43 per cent so far this year, with Toyota the dominant force in the market. It has sold 6,163 hybrid models so far this year, with the new Corolla taking the lion’s share.

Subsidising Range Rover prices, regardless of how environmentally-efficient such models might be, is not good optics for a government. Electric car sales are growing at an even faster rate, and with the promise of a ban on diesel and petrol-engined vehicle sales by 2030 still on the cards, the Government can’t row back on subsidies for those models. Things are further complicated by the possible need to adjust the VRT and motor tax bands for diesel and petrol models, in light of the new WLTP-affected emissions figures, if we’re to keep to the EU’s ruling that the switch to the new, more accurate fuel economy test is to be “revenue-neutral”.

While the sword of Damocles hovers over hybrid subsidies here, in the UK and elsewhere there’s a scramble to have them reinstated. More than half of a drivers’ weekly mileage could be covered on pure electric power in a plug-in hybrid car. That’s the claim of Mitsubishi as it fights to get better incentives introduced for plug-in hybrid models.

Mitsubishi’s study, carried out for the firm by Kadence International, showed that average weekly mileage for owners of its Outlander Plug-in Hybrid Electric Vehicle (PHEV) was 288.3km (179.2 miles), and an average of 145.8km (90.6 miles) are driven in electric vehicle (EV) mode each week, where the car is being driven only by its batteries and electric motors.

The survey also showed that 97 per cent of Outlander PHEV owners normally charge their vehicles at home with 23 per cent using public charging points. Again, this refutes the misconception that PHEVs are preventing electric vehicles from accessing charging units. Only 10 per cent of Outlander PHEV owners agree that they always plug in and recharge at motorway services, on longer journeys, suggesting that most use their combined EV/petrol power units for longer journeys instead.

“Plug-in hybrid vehicles present an opportunity to introduce people to electric motoring, while also addressing the short-term pollution issues, but the government has turned its back on the technology because of misconceptions about what motivates people to buy them. Mitsubishi Motors in the UK is calling on the government to be more inclusive of gateway technologies and to incentivise private buyers to make the first step away from pure petrol or diesel power by lowering running costs and rolling out more on-street and residential charging for people without driveways.”

Meanwhile, BMW has chimed in with research of its own (and a large R&D spend on its own fleet of plug-in hybrid models to recoup), claiming that they’re far better for the environment than reckoned, and a useful bridge to fully-electric ownership. “Our market is global. We don’t want to tell people what to do; we want our products to inspire people all over the world. Our flexible electrification strategy underlines this approach and enables us to serve very different regions of the world, as the introduction of alternative drive trains is proceeding at a different pace in different markets,” said BMW’s chair of the board, Harald Krüger.

“Technological openness is key to being prepared for the regulatory requirements and customer wishes in different markets.”

While plug-in hybrids have come in for criticism in recent times (especially in the UK, where subsidies for such vehicles was withdrawn on the suspicion that people were buying them for their tax advantages but not actually plugging them in in everyday use), BMW is adamant that they have a major role to play in both the reduction of carbon emissions and the improvement of inner-city air quality.

“The effective role plug-in hybrids can play in achieving emission-free mobility in cities is demonstrated by the example from the Netherlands: in conjunction with the City of Rotterdam, the BMW Group has implemented a pilot project to increase the use of electric power by plug-in hybrids in the city. Preliminary results indicate that participating customers drove over 90 per cent in electric mode in a specially defined ‘e-zone’ within Rotterdam,” said a BMW spokesperson.

By 2025, BMW has committed to launching 25 new or updated electrified vehicles, a roughly half-and-half mixture of all-battery models, and plug-in hybrids. “We all have a responsibility to ensure a world worth living in for our children” said Krüger. “We are bringing the right products to achieve this on to the market and have set ourselves the goal of purchasing electricity for our locations worldwide exclusively from renewable sources from 2020 on. By 2020, we also aim to have reduced the CO2 emissions of our new vehicle fleet in Europe by at least 50 per cent compared to 1995 levels. By the end of 2018, we had already achieved 42 per cent.”

According to Mike Hawes, chief executive of the Society of Motor Manufacturers and Traders, the sharp fall in plug-in hybrid sales since the ending of the UK’s government subsidy was “evidence of the consequences of prematurely removing upfront purchase incentives before the market is ready”.

Pure electric cars were, said Hawes, still only “a tiny fraction of the market and are just one of a number of technologies that will help us on the road to zero emissions. The industry needs policies that help get the latest, cleanest vehicles on the road more quickly and support market transition for all drivers.”

The Roscommon man who became a sumo wrestler in Japan
8

Our dream home came on the market. Then a nightmare followed
10