The model has long struggled against front-drive rivals from Mercedes, Audi and VW 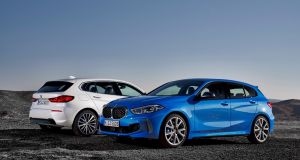 The new BMW 1 Series, which looks very much like someone conjoined a 2 Series Active Tourer and an X2, then flattened the resulting shape a little, will be officially revealed at a BMW event in June, before appearing at the Frankfurt motor show in September

Enthusiasts will rue the day, but it was as inevitable as Thanos himself - BMW is switching its compact 1 Series hatchback to front-wheel drive. A rear-wheel drive outlier ever since it was originally launched in 2006, the 1 Series has always struggled to match front-drive rivals from Mercedes, Audi, and even VW for cabin space and packaging. On top of which, BMW needs to make greater economies of scale savings with its front-drive Mini range, so the next 1 Series will use the same FAAR platform as the current Mini Countryman, as well as the X1 and X2 crossovers, and 2 Series Active Tourer MPV.

That cash-saving has led to a shape that’s almost shockingly generic for a BMW. The new 1 Series, which looks very much like someone conjoined a 2 Series Active Tourer and an X2, then flattened the resulting shape a little, will be officially revealed at a BMW event in June, before appearing at the Frankfurt motor show later this year. Actual physical sales won’t start until September for Irish customers, and there will be no base three-door model this time around. Order books open this week.

The move to front-wheel drive will also excise the six-cylinder 1 Series. While the M140i model might have been only of minority interest, its replacement will use a 302hp four-cylinder 2.0-litre turbo engine, and will go head-to-head with the likes of the VW Golf R and the Mercedes-AMG A35. The hottest 1 Series will at least avoid any front-wheel drive brickbats by using four-wheel drive. The 1 Series will also get BMW’s new ‘ARB’ high-tech traction control system, which debuted on the electric i3S, and which the company claims can quell wheelspin so effectively that it’s all but imperceptible. There’s also a cornering brake control system, that brakes the inside wheels on the way into a corner, to amp-up the 1 Series’ sensation of agility.

The most basic engine available will be the 118i with its 1.5-litre turbo three-cylinder engine, shared with the Mini, which develops 140hp. BMW will persevere with diesels in the 1 Series, offering three-cylinder 1.5 116d, and four-cylinder 2.0-litre 118d and 120d, the latter only available with an automatic gearbox. BMW hasn’t mentioned plugin-hybrid versions yet, but the 2 Series Active Tourer and Mini Countryman already come with that tech, so expect to see a plugin 125xe at some point soon.

The new 1 Series is slightly shorter, overall, than the old one but the odd thing is that its wheelbase is also shorter, which you think would result in less rear seat space. BMW, though, claims that rear legroom has actually increased by 33mm, and headroom is up by 19mm. This suggests that the seating position will move to a more upright, perched-up style, rather like that of the 2 Series Active Tourer. Boot space has increased by 20-litres to a class-competitive 380-litres.

In the cabin, an eight-inch central touchscreen, featuring a revised iDrive infotainment system, will be standard, and you can upgrade that to a ten-inch screen, along with full digital instruments. Other optional tech will include BMW’s personal digital assistant (think Alexa, but with a Munich accent) and the ability to use your smartphone as a key, which will allow you to share the car with other users.

Could I go a whole year without buying any new clothes?
3

The Roscommon man who became a sumo wrestler in Japan
8