After close to 15 years of rumours and speculation, Honda have released the new NSX - but is the American designed Japanese supercar worth the wait? We took it out on the road to find out. Video: Neil Briscoe 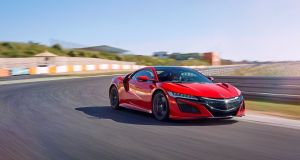 ‘Hybrids are supposed to be powered by a mixture of petrol and electricity, but the NSX’s engine note will have you convinced that this one runs on venom and rage.’ 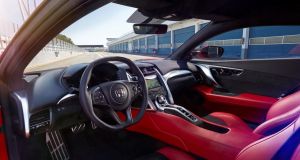 Patience is a virtue, my mother would rhyme to me when I was a child. Possess it if you can, it’s always in a woman, but never in a man. Gender stereotyped it may have been, but she probably had a point, given the male of the species’ propensity for instant gratification. Mind you, although it won’t scan, I think it might be necessary to amend that closing line to “but never in a man, unless they’re a Honda NSX fan”.

You see, the original NSX – that glorious mid-engined 1989 creation, its chassis tuned in part by Ayrton Senna, with its astonishing, howling, aluminium-and-titanium V6, and its aluminium chassis – and yes of course I had a poster of one on my bedroom wall – went out of production in 2005. Many concepts and announcements of the rebirth of the NSX were made in the years that followed, but the trail of development was almost as torturous and long-winded as that used by Toyota to bring back the Supra.

Finally, in 2017, it happened. Honda really did bring back the NSX, albeit not as a featherweight, but as a hefty mid-engined hybrid, built in – of all places – Ohio, and developed not by Senna but by the team that bring you the American market Acura lineup, Honda’s purported luxury brand.

The omens, then, were not good. How would a hybrid, weighing as much as a big diesel saloon, and developed by people who usually work on faceless SUVs with ruched leather, possibly hold a candle to that nimble, wonderful NSX? The car that showed Ferrari just how good, and how useable, a mid-engined car could be?

Well, we needed yet more patience to find out. 2017 may have been the launch date of the new NSX, but we’ve had to wait a further two years to get our hands on one in Ireland. Here it is, though, growling gently as the engine warms up in the pitlane at the Mondello Park race track.

First impressions? It’s prettier than it looks in the photos, and apparently made more of air in some places (check out those Ford GT-style flying buttresses at the side) than alloy. The shape is perhaps not as eye-catching as that of a Ferrari F8 Tributo, but then again the original NSX was on the quiet side with its styling. It’s also smaller than you’d expect, covering what appears to be the same amount of tarmac as a Civic hatchback. There’s none of the bloat of a Lamborghini here.

That powertrain is pretty interesting. At 580hp it’s well and truly outgunned by the latest offerings from Ferrari and McLaren, but then again it’s about on par with the Porsche 911 Turbo S, and at about €250,000 once you’ve paid your import duties, about the same price too.

The result? Acceleration so savage your eyeballs will compress

Only 507hp comes from the engine, though. It’s a 3.5-litre V6 twin-turbo, distantly related to the unit found in the old Legend saloon (remember them?). The extra power comes from three electric motors. One is sandwiched between the engine and the nine-speed paddle-shift gearbox. Two more are mounted up front, parcelling out power to a wheel each. So four motors, then. One petrol and three electric. Honda quotes a whole system output of 645Nm of torque, but it’s not that simple. Each of those front motors has 73Nm to send individually to the front wheels from 0rpm, while the single rear motor can chime in with 147Nm.

The result? Acceleration so savage your eyeballs will compress. Honda doesn’t officially quote a 0-100km/h time, but it’s reckoned to be a little over 3.0 seconds, which is quick enough to seriously trouble even the machinery from Maranello. Traction, thanks to those extra motors, is total, and so you scream forward, surfing a wave of addictive noise. Hybrids are supposed to be powered by a mixture of petrol and electricity, but the NSX’s engine note will have you convinced that this one runs on venom and rage.

Go deep into the braking zone for the tight turn one at Mondello, and as you jab into the apex, you notice three things. One: the steering is a little light in weight and a touch light in feel, but sniper-scope accurate. Two: the brakes don’t have perfect feel nor pedal response (they’re brake-by-wire, which helps to maximise the regenerative braking to feed the hybrid batteries) but it does stop rather well all the same. Three: when the NSX does break loose at the rear, as it all but inevitable, you’ll very quickly feel a friendly tug from one of the front electric motors, which will step in to assist you in pulling the car straight again before things get very expensive indeed.

Was it worth the wait? Oh heck yes. Yes with a capital Y

The gearshifts of the nine-speed ’box are remarkable not because they’re especially fast nor sudden (they’re about middle-rank when it comes to such metrics, in terms of sports and supercar gearboxes) but because each tug of a paddle unleashes another tide of wonderful, glorious noise. This is a hybrid, but it’s no Prius, that’s for sure. Fuel economy? For what it’s worth Honda claims 10.0-litres per 100km on the combined cycle. That’s 28mpg which seems reasonable. You might get better than that if you’re being gentle. You will not be gentle…

What else? Well, the interior is a bit of a mish-mash. There are nice carbon-fibre touches, flashes of red and black Alcantara suede, and great seats. The digital instrument readout looks great, and the big alloy starter button looks suitably tempting. There’s a bit too much Civic and CR-V on show in some other areas though, but then that was true too of the original so maybe we’re being needlessly harsh.

Was it worth the wait? Oh heck yes. Yes with a capital Y underlaid by the fabulous V6 turbo howl as the crankshaft spins past 7,000rpm. Honda’s done it again – it’s made a car with the thrill and fury of a Ferrari (well, most of it anyway) but the usability, visibility, and likely the reliability of a Civic. I sure can’t afford to put one on my driveway, but the teenager within is clearing poster space on his wall right now. Patience pays.